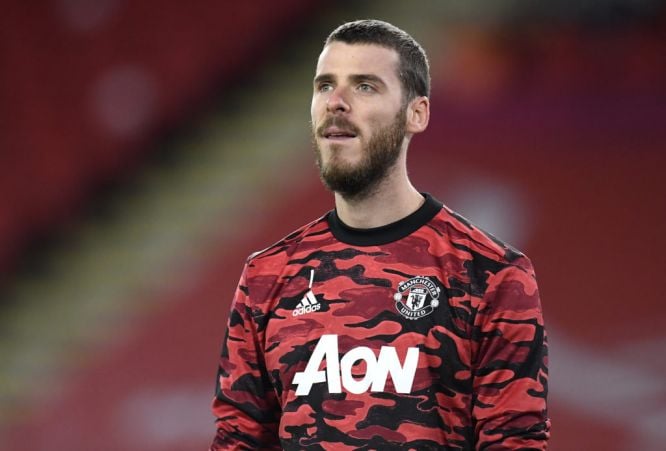 Despite the potential coronavirus-related quarantine headaches, the Red Devils boss had no hesitation in allowing the 30-year-old to fly to Spain to be with his partner for the birth of their child last week.

Solskjaer said last Friday that he expected De Gea “to be available very soon” and said they “just have to follow the Government rules” after the goalkeeper missed last Wednesday’s draw at Crystal Palace.

Dean Henderson deputised that night and impressed again in Sunday’s 2-0 win against Manchester City but he was found wanting when AC Milan made it 1-1 at the death in Thursday’s Europa League last-16 first leg.

Asked about De Gea’s availability for West Ham’s visit on Sunday, Solskjaer said: “Yeah, David is back in Manchester. He is quarantining or self isolating.

“He’s just touch and go for Sunday, I think. I can’t really know when he came back, so I’m not really sure if it was Monday or Tuesday that he arrived back in Manchester.”

Current regulations allow travellers from Spain to be released from quarantine if they test negative for Covid-19 after five days of isolation.

Pushed to clarify De Gea’s situation, the United boss added: “I think the rules are that he’s got to stay at home.

“He’s not training with us anyway. It’s different if you travel away and compete so, no, he’s not been training since he came back.”

De Gea would return to a side that are beginning to count the cost of injuries after getting through the frantic festive period relatively scot free.

Anthony Martial needs assessing after a hip complaint forced him off at half-time on Thursday, compounding the absence of fellow frontmen Marcus Rashford and Edinson Cavani.

“Anthony, he got a whack on his hip so that’s another forward that we  need to scan and have to look at,” Solskjaer said.

“Definitely hope Marcus is back for next Thursday in Milan, I’m not sure if he’ll make Sunday, but fingers crossed because we will need him.

“Edinson I don’t think will be ready for Sunday, no.”

Paul Pogba, Donny van de Beek and Juan Mata are also set to be out of the Hammers’ visit.

“No, I don’t think any of those will be available,” the United boss said of the trio.  “We hope before the international break but I’m not sure. It’s taken a little but longer than we expected.

“But three games now, international break and then after that they will be available with us.”

The steady increase in injury issues was behind Solskjaer’s initial reluctance to allow Jesse Lingard to leave, despite his lack of game time in the first half of the season.

But the 28-year-old was eventually allowed to join West Ham on loan until the end of the season and has flourished, scoring four goals in six appearances.

“So, for me, it was a no-brainer really to get Jesse a chance to prove himself and to play some football again.

“He’s been really bright for them and he’s finally back to himself.”

Lingard is ineligible to face his parent club at Old Trafford, where Eric Bailly will be hoping to retain his starting role in defence.

The 26-year-old has endured an injury-hit time since joining United in 2016, managing more than 20 appearances in just one of his four previous seasons at the club.

But Bailly has already appeared 15 times in all competitions this term and discussions are under way to extend his deal beyond next year.

“Yeah, we have started talking to Eric and Eric’s representatives,” Solskjaer said.

“Eric is keeping fitter for longer and you can see his performances as well. I have been very happy with him.

“His playing style has made him (miss) too many games because 100 games that’s not enough for the period he’s been here. He’s getting more and more robust, so, yeah, he is one we are talking to.”