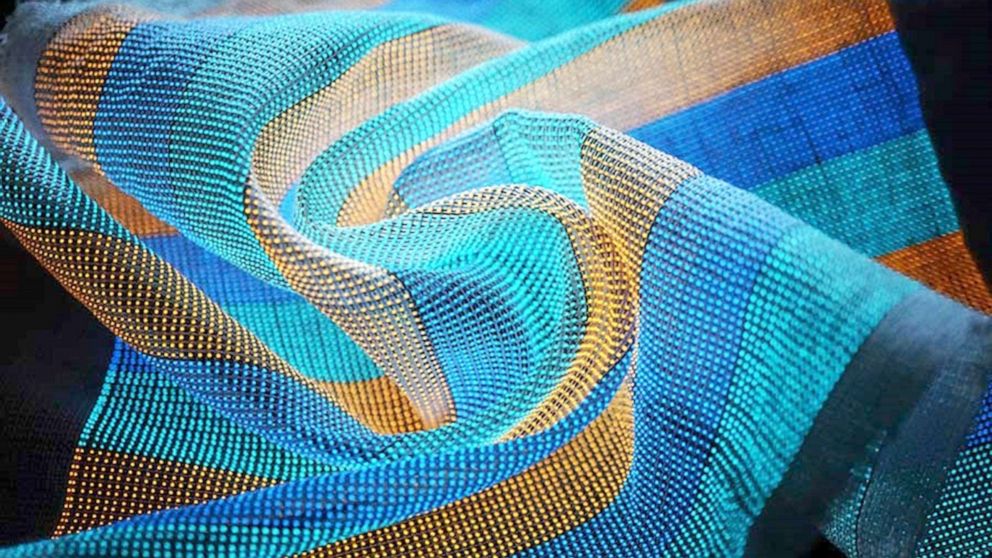 A wearable interactive display made of a flexible, breathable electronic fabric can display simple maps and text messages, potentially for use in future smart clothing, a research group reports in its latest paper.

Increasingly, researchers around the world are investigating electronic textiles as the next step in wearable technology beyond smartphones and smartwatches. One problem with developing such wearable devices is that video displays are typically rigid and bulky.

Previous research has developed flexible thin-film displays that are rollable, foldable and stretchable. However, such electronics have not yet been successfully incorporated into clothing. This is because it has proven challenging to design textile displays that are both durable over time and easy to assemble over a large area.

Now, Chinese scientists have woven swaths of a new fabric display roughly 20 feet long by 10 inches wide. “It’s quite surprising and amazing that they’ve been able to scale their display to a piece of cloth that’s so large,” said chemical engineer Zhenan Bao at Stanford University in California, who did not take part in this research.

To make the new textile, polymer scientists Peining Chen and Huisheng Peng at Fudan University in Shanghai and their colleagues weave electrically conductive transparent fibers and luminescent threads together with cotton yarn into a flexible, breathable fabric. The fabric contains roughly half a million pixels, one for each point where the electrically conductive weft threads meet the luminescent warp fibers, spaced about 800 microns apart. (In comparison, the average human hair is about 100 microns wide.)

The fabric is about as bright as the average flat-screen TV. The researchers noted their prototype was also significantly more durable than conventional thin-film flexible displays, making it more suitable for practical use. The performance for most of the display remained stable after 1,000 cycles of bending, stretching and pressing, and 100 cycles of washing and drying.

One likely application for this is wearable displays. The researchers incorporated a touch-sensitive 16-button fabric keyboard, solar-energy-harvesting threads and battery fibers into their textile to add interactivity and a power supply. They added electronics to wirelessly link it to a smartphone via a Bluetooth connection so users could send and receive messages on their sleeves, as well as see their real-time locations on a map.

“Designers will have another major tool to add into their designs,” said study co-author Qibing Pei, a materials scientist at the University of California, Los Angeles.

Another potential use lies in health care. Included in the prototypes was a roughly 9-inch-by-2.5-inch textile display that could help monitor volunteers who wore headsets that read their brain waves. When the headsets detected low-frequency brain waves from meditating participants, the devices transmitted that data to a computer linked to the fabric so that it displayed the word “relaxed.” When the headsets detected high-frequency brain waves from volunteers playing a race car game, the fabric displayed the word “anxious.”

In the future, smart clothing might help display messages from people with voice, speech and language impairments, the scientists noted. It might even work in concert with devices that can decode complex brain waves to figure out what these people would like to say but cannot, they added.

The researchers noted they could lower the amount of voltage needed to operate their displays to less than 36 volts. Still, “putting displays with this kind of voltage directly on the body may potentially be a concern,” Bao cautioned.

The scientists said they have product models of their fabric available now, and many companies are in talks to use them. They detailed their findings online March 10 in the journal Nature.