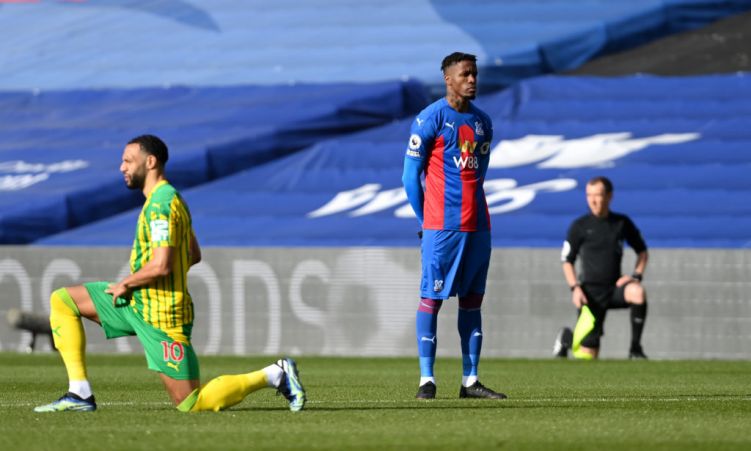 Crystal Palace’s Wilfried Zaha stands while out players take a knee prior to the Premier League match with West Brom at Selhurst Park, © PA Wire/PA Images

Crystal Palace attacker Wilfried Zaha has become the first Premier League player not to take a knee before kick-off.

The 28-year-old decided to stand ahead of Saturday’s match with West Brom at Selhurst Park, to highlight more needs to be done in the fight against racism.

Zaha revealed last month when speaking at the Financial Times’ Business of Football summit he would no longer perform a gesture which has become familiar with top flight players, officials and staff since Project Restart in June.

After returning from a hamstring injury earlier this month, he appeared off the bench at Tottenham last weekend before Palace manager Roy Hodgson included the Ivory Coast international in his starting XI to face the Baggies which gave the winger his first opportunity to stand.

Wilfried Zaha stands tall while the rest of his Crystal Palace team-mates and the West Brom players take the knee #cpfc #wbafc pic.twitter.com/bkQHKhKJud

When referee Simon Hooper blew his whistle at Selhurst Park to signal players, officials and staff could take the knee before kick-off, Zaha stood while the rest of his team-mates and those in the West Brom starting line-up took the knee.

In a statement to the PA news agency, Zaha said: ‘My decision to stand at kick-off has been public knowledge for a couple of weeks now.

“There is no right or wrong decision, but for me personally I feel kneeling has just become a part of the pre-match routine and at the moment it doesn’t matter whether we kneel or stand, some of us still continue to receive abuse.

“I know there is a lot of work being done behind the scenes at the Premier League and other authorities to make change, and I fully respect that, and everyone involved. I also fully respect my team-mates and players at other clubs who continue to take the knee.

“As a society, I feel we should be encouraging better education in schools, and social media companies should be taking stronger action against people who abuse others online – not just footballers.

“I now just want to focus on football and enjoy being back playing on the pitch. I will continue to stand tall.”

The Palace academy graduate is the first Premier League player not to take the knee and joins Sky Bet Championship clubs Derby, Bournemouth and Brentford in no longer taking part in the gesture pre-match.

It was brought in after football resumed in June as a way to promote the anti-racism message after the death in police custody of George Floyd in the United States last May sparked a rise in Black Lives Matter protests.

However, with a repeated number of footballers becoming the victims of racist abuse on social media in recent weeks, the gesture has come under scrutiny.

Premier League chief executive Richard Masters this week said taking the knee would continue until the end of the season but then there would be fresh talks with players over the most effective way to move forward.

No Room For Racism pic.twitter.com/aY6AT2O5hk

On Friday, Hodgson backed Zaha’s right to make a stand, saying: “Wilf is of the opinion that taking the knee now isn’t showing his abhorrence as much as he would like so he has decided to do something different.

“But as a team they have decided they will continue to do what other teams are doing and this decision of Wilf’s is very much a personal one which we all respect and the team has no problem with it whatsoever.”