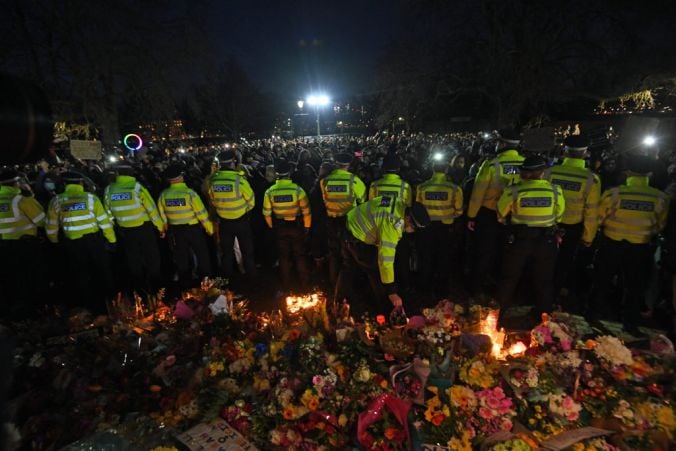 The Metropolitan Police has faced intense criticism for its handling of a London vigil in memory of Sarah Everard, with officers accused of “grabbing and manhandling” women during clashes with the crowd.

While the vigil in Clapham, south London, was largely peaceful, scuffles broke out at the front of a crowd of hundreds as police surrounded a bandstand covered in floral tributes to the 33-year-old.

At one stage, male officers could be seen grabbing hold of several women before leading them away in handcuffs, to shouts and screams from onlookers.

In response, the crowd chanted “shame on you”, while during another confrontation a distressed woman could be heard telling officers “you’re supposed to protect us”.

Scuffles break out at Clapham Common memorial for Sarah Everard as people chant “arrest your own.” pic.twitter.com/6AXFK5sl7a

The clashes prompted a chorus of criticism from UK MPs, including Labour leader Keir Starmer, who described the scenes as “deeply disturbing”.

“Women came together to mourn Sarah Everard – they should have been able to do so peacefully,” he tweeted.

“I share their anger and upset at how this has been handled. This was not the way to police this protest.”

Hundreds of people converged on the south London park despite an official vigil being called off earlier in the day due to police warnings over coronavirus restrictions.

While the Clapham clashes took place, many other peaceful vigils were held around the country in locations including Glasgow, Nottingham, Birmingham and Bristol – despite warnings over lockdown.

A virtual event was also held at 6pm in which campaigners called for more to be done to tackle violence against women.

Several female politicians expressed their anger at the Met over the officers’ tactics in Clapham.

Labour MP for Streatham Bell Ribeiro-Addy wrote on Twitter: “This could have been the socially distanced vigil the community needed to remember Sarah and all the women who have lost their lives to violence. We knew what was going to happen if the event was shut down.

She added: “I know Lambeth Borough officers made efforts to compromise with the organisers but were overruled from high up.

“They’ll be left to deal with the fallout of this and the further burden it places on already strained community relationships. Very disappointing from Scotland Yard.”

Campaign group Sisters Uncut, which had representatives present at the demonstration, claimed that “male police officers waited for the sun to set before they started grabbing and manhandling women in the crowd”.

Tonight Carrie and I will be lighting a candle for Sarah Everard and thinking of her family and friends. I cannot imagine how unbearable their pain and grief is. We must work fast to find all the answers to this horrifying crime.

Campaign group Reclaim These Streets, which had planned to hold the Clapham vigil before it was cancelled, urged people to take part in a doorstep vigil at 9.30pm on Saturday.

The group said it would be joining people across the country and “shining a light, a candle, a torch, a phone, to remember Sarah Everard and all the women affected by and lost to violence”.

UK prime minister Boris Johnson said he would light a candle for Ms Everard with his fiancee Carrie Symonds, adding that he would be thinking of the 33-year-old’s family and friends.

“I cannot imagine how unbearable their pain and grief is. We must work fast to find all the answers to this horrifying crime,” he said.

UK home secretary Priti Patel said she would also be lighting a candle, and added that almost 20,000 people had responded in 24 hours to a consultation on how the UK government could tackle violence against women and girls.

“That is completely unprecedented & we will carefully consider responses,” she tweeted.

The Duchess of Cambridge was among those to visit the make-shift memorial at Clapham Common on Saturday to pay her respects, and was seen pausing in front of the sea of flowers.