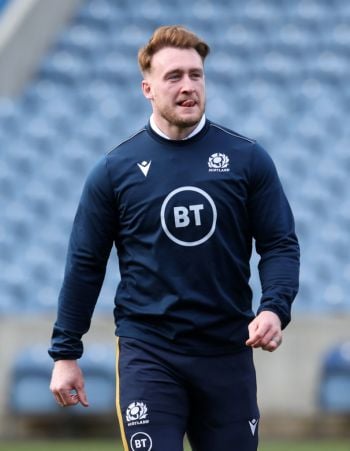 Scotland captain Stuart Hogg insists his team cannot wait to get on the field to face Ireland in the Guinness Six Nations clash at Murrayfield.

The Dark Blues have not played for a month since the 25-24 defeat to Wales after their February 28th clash with France was called off following an outbreak of coronavirus in Fabien Galthie’s squad and they are raring to go.

But Hogg believes it is important they do not get ahead of themselves where they can get punished by a team as experienced and talented as Ireland.

"The boys are chomping at the bit to get going"

The 28-year-old full-back admits it is crucial Scotland take the game minute by minute and do not give Andy Farrell’s side the chance to capitalise on a lack of concentration.

Scotland sit fifth in the Six Nations table and need victory to get their campaign back on track.

Hogg said: “We’re absolutely chomping at the bit to get going tomorrow. It’s been three or four weeks since we last played. That’s a challenge on it’s own with not a lot of boys not having had game time.

Hogg believes his side can take confidence from a productive spell on the training ground and is relishing the challenge presented by Ireland.

“I think the quality in training has been right up there and it’s given us a huge amount of confidence that we can go out there and implement our gameplan in attack.

“We can really starve teams of possession if we can hold onto it. But defensively we have to front up and make sure we’re physical and we’re dominant in everything.

“The main thing is staying in the moment, breaking the game down to moment by moment and making sure we’re getting it spot on and we can celebrate little victories and come together as a team if something needs fixed.

“It’s the moments where we slip up, switch off for five or 10 seconds that you can’t get away with in international rugby.”