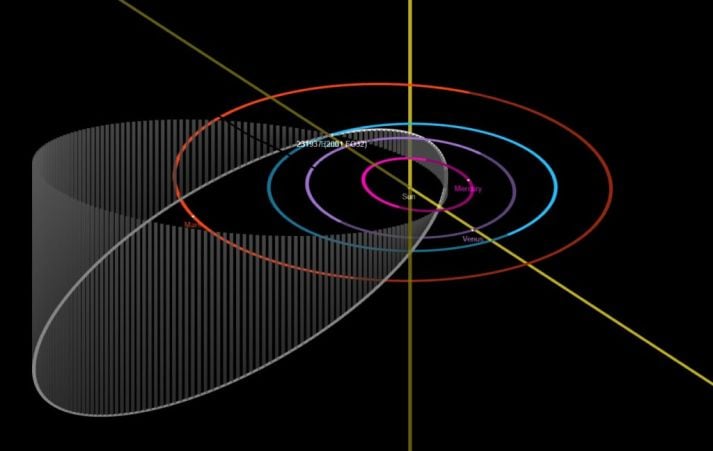 The largest asteroid predicted to pass by Earth this year will be at its closest to the planet next week before being thrown back out into space, Nasa has said.

While the interplanetary interloper will not come closer than 1.25 million miles from Earth, it will present a scientific opportunity for astronomers.

Called 2001 FO32, the near-Earth asteroid will make its closest approach on March 21st at a distance that is equivalent to five-and-a-quarter times the distance from the Earth to the Moon.

There is no threat of a collision with our planet now or for centuries to come, Nasa said.

Paul Chodas, director of the Centre for Near Earth Object Studies (CNEOS), which is managed by Nasa’s Jet Propulsion Laboratory, said: “We know the orbital path of 2001 FO32 around the Sun very accurately, since it was discovered 20 years ago and has been tracked ever since.”

He added: “There is no chance the asteroid will get any closer to Earth than 1.25 million miles.”

However, because the distance is close in astronomical terms, the rock has been designated a “potentially hazardous asteroid”.

During its approach, 2001 FO32 will pass by at about 77,000mph – faster than the speed at which most asteroids encounter Earth.

The reason for the asteroid’s unusually fast close approach is its highly inclined and elongated (or eccentric) orbit around the Sun – an orbit that is tilted 39 degrees to Earth’s orbital plane.

This orbit takes the asteroid closer to the Sun than Mercury and twice as far from the Sun as Mars.

As the asteroid makes its inner solar system journey, it picks up speed like a skateboarder rolling down a halfpipe, and then slows after being flung back out into deep space and swinging back towards the Sun.

It completes one orbit every 810 days.