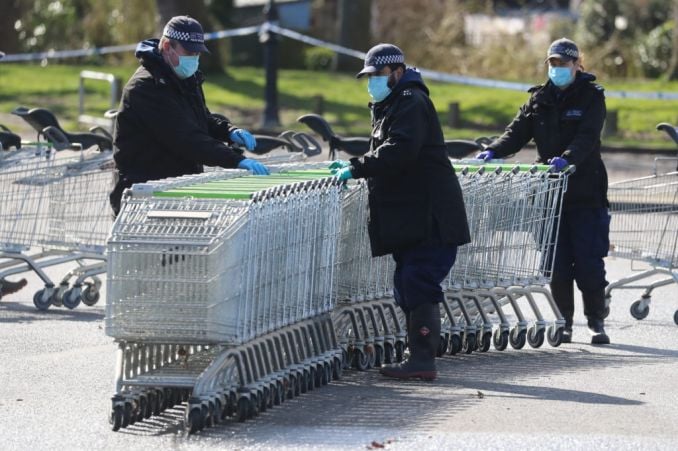 Police officers in England investigating the death of Sarah Everard have been combing a supermarket car park in the town of Sandwich, Kent.

Large portions of the historic town remained cordoned off with police tape on Monday afternoon as inquiries into the death of the 33-year-old continue.

Serving London police officer Wayne Couzens (48) has been charged with kidnapping and killing the marketing executive, who went missing while walking home from a friend’s flat in south London on March 3rd.

On Monday, officers used sticks to search through a shopping trolley shelter outside a Co-operative supermarket, while others looked under vehicles.

At the edge of the cordon, a few officers gathered for discussion as one showed their colleagues a piece of gold jewellery that was then put in an evidence bag.

Police officers are searching the Co-op car park in Sandwich after a body found hidden in woodland at Ashford was identified as that of Ms Everard.

Meanwhile, a specialist marine unit from Devon and Cornwall is on the scene, with officers believed to be preparing to search in the water.

The River Stour runs through the town of Sandwich, located a couple of miles from the coast.

In a separate car park by the town’s Guildhall, officers dressed in blue overalls were seen pulling on wellies in another cordoned-off area.

On Sunday, Sandwich Town Council said it is in contact with Kent Police on behalf of Scotland Yard as part of the investigation.

Scotland Yard said police have routinely been searching areas of London and Kent as part of the investigation.

The London Metropolitan Police said Couzens joined the force two years ago in September 2018 when he worked for a response team covering the Bromley area, before moving to the Parliamentary and Diplomatic Protection Command in February last year.