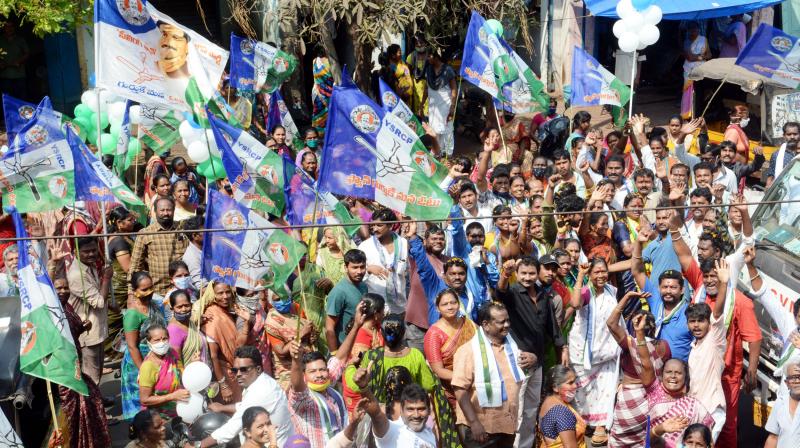 KURNOOL: Continuing its winning trend since last general elections, YSRCP has swept all municipalities in the Kurnool district, apart from the Kurnool Municipal Corporation (KMC).

While the ruling party won 41 out of 52 wards in KMC, TDP got nine wards. Two seats were won unanimously by YSRC. All the seven municipalities in Kurnool district, apart from Atmakur Nagara Panchayat have also been won by the ruling party.

AIMIM did not open its account, despite its president and Hyderabad MP Asaduddin Owaisi campaigning in Kurnool and Adoni. The party had contested from total 27 wards in various municipalities.

Finance Minister Buggana Rajendranath Reddy played a major role in ensuring the victory of ruling party candidates in all segments of urban local bodies in the Kurnool district. Dhone municipality, the home constituency of Rajendranath Reddy, saw YSRCP winning 31 wards while one ward went to CPM. The influence of the K. E. Krishnamurthy family appeared negligible in Dhone, as TDP won no seat.

In addition, YSRC won majority of seats in the municipalities of Nandyal, Adoni, Yemmiganur, Guduru, Allagadda, Atmakur and Nandikotkur in Kurnool district. There are total 302 wards in various municipalities and one municipal corporation. YSR Congress won 256 wards, TDP 23, BJP 3, CPI 1, CPM 1 and independents 19 wards. CPM, which won five wards in Kurnool Municipal Corporation, drew a blank this time. BJP got two seats in Allagadda and one in Guduru municipality.

YSR Congress Party Kurnool parliamentary president B. Y. Ramaiah, who contested from the 19th ward of KMC, won with a majority of 2,066 votes. He is tipped to be the first mayor of KMC from backward classes. The mayoral seat has been lying vacant since past 11 years due to court cases.