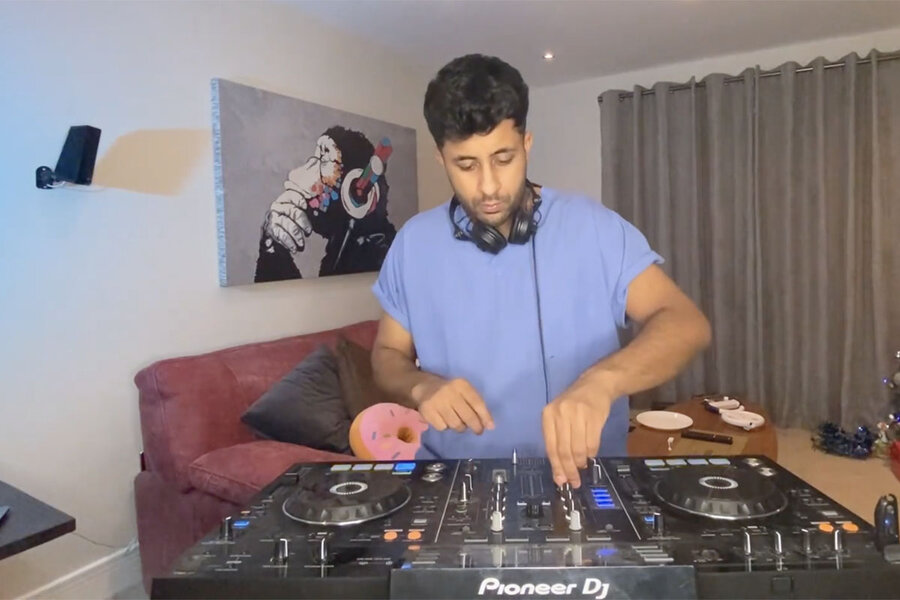 It was Kishan Bodalia’s weekly DJing that thrust him into the United Kingdom’s national spotlight over the past month. The resident of Birmingham, Britain’s “second city,” has performed for hundreds of thousands across the world from his kitchen.

But he probably wouldn’t have received so much national attention were it not for his full-time job: Dr. Bodalia works at an intensive care hospital ward, on the front line of Britain’s pandemic. His DJing – dubbed #NHSessions in a play on the acronym for the U.K.’s National Health Service, and which he performs in hospital scrubs – was originally meant to be a way for him to find solace from the health crisis.

Emeka Okorocha is in a similar situation. The accident and emergency NHS doctor has been hugely popular on TikTok, where he posts videos of himself dancing in his hazmat suit, reading out “mean tweets” sent to health care workers, or speaking out after the death of George Floyd by telling his followers, “if you celebrate me in scrubs, don’t hate me in my hoodie.”

Amid the hardships of the pandemic, Britons’ sense of who qualifies as a “celebrity” has expanded beyond entertainers and the gifted to encompass the altruistic and those who are helping people.

The rise of Dr. Bodalia and Dr. Okorocha, who have a combined following of more than 85,000 on Instagram alone, reveals a shift in who, and what, constitutes celebrity in the eyes of Britons during the pandemic. At a time when the U.K. records one of the world’s highest death tolls per capita from COVID-19, the country has been granting iconic status to those who serve communities, do public good, and raise awareness for social causes.

“Celebrity is cyclical and responds to what the overarching culture wants at any given time,” says Jorie Lagerway, associate professor in television studies at the University of Dublin. “The reason we have celebrities is to tell us what’s important in our culture at that particular moment in history.”

We can be heroes

The pandemic has seen Britons rallying to figures of accomplishment and grit in addition to those celebrities appreciated for their abilities to entertain – or sometimes simply celebrity for celebrity’s sake.

Some of these new national heroes have transcended age, color, and class, such as army veteran Capt. Sir Tom Moore, the centenarian who raised more than £39 million ($54 million) for the NHS making laps with his walker around his garden. And while Marcus Rashford is a young professional soccer player, he earned national recognition by challenging the U.K. government to provide free school meals for children in low-income households during the pandemic.

It is people like them, and a host of ordinary health care workers with burgeoning reputations on social media, who have become Britain’s biggest celebrities in the pandemic.

“In a crisis, we seek out slightly different types of celebrity,” says Greg Jenner, historian and author of “Dead Famous: An Unexpected History of Celebrity from Bronze Age to Silver Screen.” Britain in lockdown, he says, has resuscitated a centuries-old version of the “compassionate” celebrity: Think British nurses Florence Nightingale and Mary Seacole, venerated for their caregiving roles during the Crimean War in the 19th century. Grace Darling, the daughter of a lighthouse keeper, won the nation’s hearts in the 1800s for saving victims of a shipwreck off the Northumberland coast. And as far back as the 17th century, women who fought wars pretending to be men gained notoriety.

“Some of the earliest celebrities weren’t great intellectuals, or talented writers and actors, or with a skill set, but people thrust into the limelight pretty rapidly because of something they might have done or said during a moment of crisis,” says the historian.

Pandemic stardom currently hinges on doing good because the current moment calls for altruistic qualities. At a time of “huge rhetoric around community and pulling together,” says Ms. Lagerway, it “makes sense” that Captain Moore, a World War II soldier, became a focal point of hope. The centenarian became the oldest person to score a No. 1 hit single in the U.K. music charts, and wrote children’s books. Britons marked his death in February with a minute of silence and flags above Downing Street lowered to half-mast.

Similarly, Dabirul Choudhury, a Muslim centenarian, raised £420,000 ($580,000) doing laps while fasting for the month of Ramadan in lockdown, and Rajinder Singh, a 73-year-old Sikh, gained a social media following with his videos skipping rope and exercising in Britain’s isolation.

With his Caribbean heritage and lived experience of childhood hunger, Mr. Rashford’s appeal ramped up after Parliament’s rejection of school meal provisions. According to British pollster Ipsos Mori, the majority of Britons feel the soccer player has held the U.K. government to account better than both the opposition Labour Party and the media. His championing of poor people is a kind of 21st-century reincarnation of Charles Dickens, says Mr. Jenner, who calls the writer the voice for “Christian socialism” in Victorian Britain.

“As an authentic person requiring help with government handouts when he was younger and as a person of color, his voice really carries and his heroism really matters. People are listening to him. No one can stop his moral argument,” Mr. Jenner adds.

The NHS is celebrated across all political colors in the U.K. Decadeslong reverence for free universal health care has, perhaps, provided a foundation for the current “heroization of health care workers.” Ms. Lagerway, who is a U.S. national, says Britons’ celebration of their health care workers reminds her of New York in the aftermath of 9/11.

Dr. Okorocha says he is “recognized” as opposed to being “famous.”

“Everyone’s always known what doctors have done, but we didn’t sign up for such high risk work. We just had to face it; because of that, anything we did was highlighted or escalated,” he says. “Trying to keep people educated, entertained, and in good spirits meant it all just blew up online.”

That may be because social media stars do not fit into the classic trope of celebrity, says Mr. Jenner. “Influencers aren’t classic celebrities. The rules are a bit different,” he says, although “influencer and celebrity … are fusing a little bit.”

Both Mr. Jenner and Ms. Lagerway say social media “influencers” have yet to fully cross over into the world of glitzy, magazine-cover celebrity. Though increased time online spent by consumers of social media in lockdown has led to video creators finding fame online.

“Whether we are seen in the public as a celebrity or [just as a social media influencer] is really another question,” says Dr. Bodalia.

What is certain is that both he and Dr. Okorocha have gone beyond the realms of social media branding, and potentially reaping the rewards of real-life celebrities.

Since first going viral last year, Dr. Okorocha has produced educational videos for the BBC and has a book lined up to be published. Dr. Bodalia says he now has the chance to fulfill his dream of playing music on stage at festivals this summer, to release his own music, and to “be heard around the world.”

“When the pandemic finishes … I’ll still be DJing and making music. Just in front of as many people as I can.”