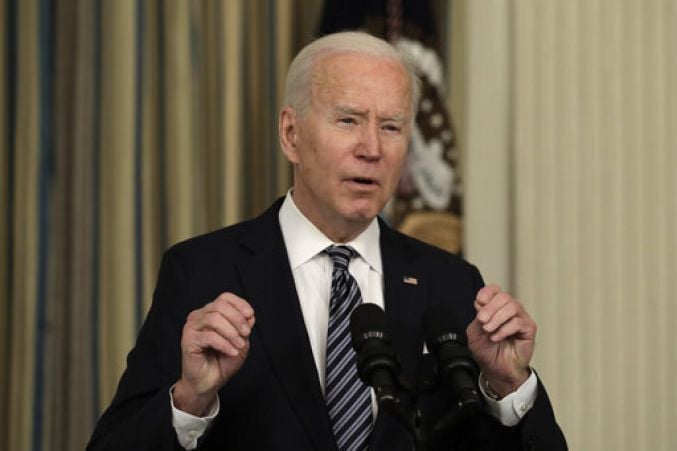 Mr Biden and his team have been trying to figure out how to vaccinate more Republicans as polls show some supporters of the former president have not wholeheartedly accepted the idea of getting vaccine shots.

Speaking to reporters at the White House, Mr Biden said he had discussed the issue with his advisers.

Mr Trump has said little to his supporters about getting vaccinated, after quietly getting the vaccine himself in January. “Everybody, go get your shot,” he told the Conservative Political Action Conference late last month in Florida.

White House spokeswoman Jen Psaki said Mr Trump could help but did not necessarily expect him to do so.

“If former President Trump woke up tomorrow and wanted to be more vocal about the safety and efficacy of the vaccine, certainly we’d support that,” Ms Psaki said.

Health officials are contacting evangelicals and other conservatives to reach Republicans, she told reporters at her daily briefing.

“The president’s goal is to vaccinate all Americans, not just those who voted for him,” Ms Psaki said. “We know that we need to meet everyone where they are, and that includes conservatives, and ensure there are trusted messengers who lead the way in those engagements.”

In a PBS NewsHour/NPR/Marist poll released last week, about half of US men who identified themselves as Republicans said they had no plans to get the vaccine.

81% of Republicans said they would trust their own doctor’s advice on a Covid-19 vaccine, Ms Psaki said Monday, and that’s one area where the White House is concentrating.

The other living former US presidents – Barack Obama, George W. Bush, Bill Clinton and Jimmy Carter – are set to appear in two public service announcements for the coronavirus vaccine alongside their wives, without Trump.

Other presidents “have participated in public campaigns” on the vaccine, Ms Psaki said Monday. “They did not need an engraved invitation to do so,” she added.