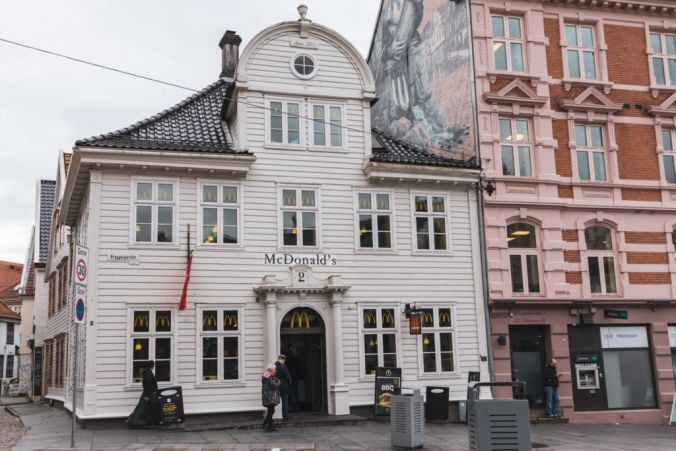 McDonald’s is all about uniformity: sometimes it feels like if you’ve seen one, you’ve seen them all.

However, not all of the 36,000-plus restaurants are the same. In fact, some outposts have made their home in some historic, quirky and simply jaw-dropping buildings.

This historic city is known for its quaint wooden houses surrounded by mountains and fjords. With no big arches on the painted timber facade, you wouldn’t immediately know this building is a McDonald’s – but it looks the same as everywhere else in the world when you go inside.

Designed by architect Giorgi Khmaladze, this futuristic structure in Batumi was awarded building of the year 2014 in the commercial architecture category by ArchDaily. Once you’ve grabbed a burger from McDonald’s, you can check out the building’s reflecting pool.

Tucked away on the busy Rue Saint-Lazare in Paris is an elaborate wooden building. Now home to a McDonald’s, it was once an Alsatian restaurant with a steep roof typical for the area. The figure in the middle of the facade is Gambrinus, the king of beer in European folklore.

One of the more imposing McDonald’s from around the world, this restaurant is housed in a former bank – complete with a marble facade inspired by classical Greek architecture.

Is it an historic town hall? Is it a Tudor palace? Nope, it’s the McDonald’s in Bray.

This is definitely one of the quirkier outposts, as diners can eat their lunch inside a decommissioned DC3 plane.

This example of art deco architecture was built in the 1930s, and stands out from the crowd with a curved shape and concrete balconies. It used to be a hotel, but is now home to one of the classiest McDonald’s in the world.

If you like your architecture more futuristic, you might want to visit Roswell in New Mexico. The city is best known for what was thought to be a UFO crash in the 1940s, and now has become synonymous with extraterrestrial activity; it’s even home to International UFO Museum and Research Center. In keeping with the city’s theme, the local McDonald’s is shaped like a UFO, with neon lights glowing from the exterior at night.

With stained glass windows and chandeliers hanging from the ceiling, this Maccas used to be a grand cafe dating back to the 1930s. The first thing you’ll notice on arrival is a massive bronze eagle guarding the entranceway.