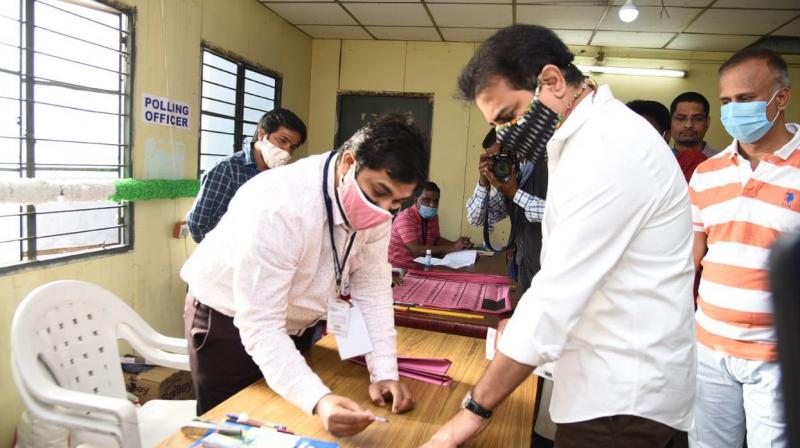 Hyderabad: A massive turnout of voters was witnessed for the Legislative Council elections to two graduate constituencies of Hyderabad-Ranga Reddy-Mahbubagar and Warangal-Khammam-Nalgonda on Sunday.

The Election Commission has put the tentative polling percentage for the Warangal-Khammam-Nalgonda seat at 64 per cent and for Hyderabad-Ranga Reddy-Mahbubnagar seat at 59 per cent till 4 pm. The counting of votes will take place on March 17. The polling percentage was less than 40 per cent in 2015

Contrary to fears that the polling percentage would be hit due to the long weekend (holidays from Maha Shivaratri on March 11 to Sunday on March 14), all the booths witnessed serpentine queues of voters even after the polling deadline of 4 pm. Officials allowed all the voters who were in queues before 4 pm to cast their votes till 7 pm.

According to party sources, the general feedback received was that the higher polling percentage was in favour of TRS candidates Surabhi Vani Devi and Palla Rajeshwar Reddy.

Ministers told the CM and Rama Rao that the party's poll strategy right from monitoring the enrolment of graduate voters to bringing them to the polling booths and ensuring that they cast votes without fail has worked wonders.

They said that due to the enrolment drive taken up by TRS leaders and cadre, the total number of voters had doubled this time to over 10 lakh voters against 5 lakh voters in 2015 polls.

They said over 2 lakh voters were enrolled by TRS alone who comprise party members and their family members and expressed confidence that TRS will win both the seats easily with the support of these voters.