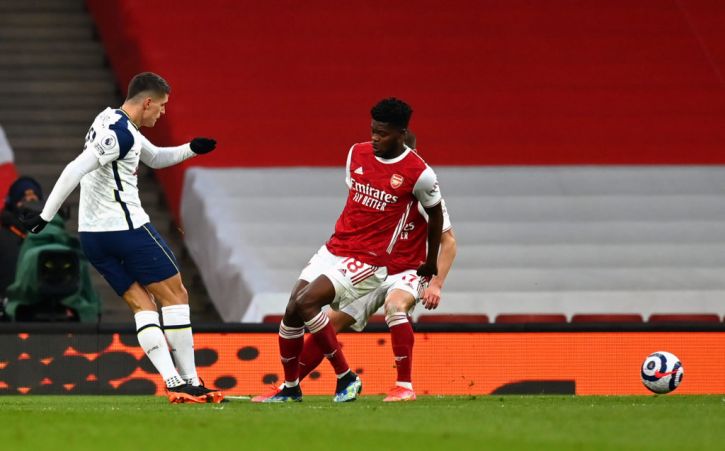 Lucas Moura admits it is bittersweet that Tottenham cannot celebrate Erik Lamela’s “unbelievable” goal against Arsenal after they eventually went on to lose the game 2-1.

Lamela came off the bench to replace the injured Son Heung-min and opened the scoring in Sunday’s north London derby with a sublime Rabona finish which even left some of his own team-mates agog.

But the Argentinian went from hero to zero as he was sent off in the second half, picking up two yellow cards in six minutes after Spurs had fallen behind.

A deflected Martin Odegaard effort and an Alexandre Lacazette penalty proved enough for Arsenal to take all three points, even if Lamela’s goal had threatened to steal the show.

“It was an unbelievable goal,” said Moura.

“I think he has already scored a goal like this but in a derby it is special and he is an amazing player.

“He does this in the training sessions all of the time but we are unlucky that we didn’t win the game because with this goal, if we had won, it would have been even more special.”

Sergio is all of us right now! 😱

Moura also echoed the sentiments of Spurs boss Jose Mourinho, who bemoaned a poor start from his side at the Emirates Stadium.

Despite Lamela’s strike, Arsenal had the better of the first half, levelling through Odegaard and seeing both Emile Smith Rowe and Cedric Soares hit the woodwork.

“For me the first half is easy to analyse, we were very poor,” Mourinho said after the match.

Tottenham eventually rallied when down to 10 men in the closing stages as Harry Kane saw a header ruled out for offside before hitting the post with a low free-kick late on.

“We started the game too passive, too slow,” added the Brazilian.

“In this type of game we need to have more desire, to press them higher but we didn’t do this but it is finished, it has happened and we cannot concede the same mistakes in the next game.

“The feeling is bad because we are leading the game 1-0 but we started the game too slow.

“We started with no intensity and we could have conceded more goals in the first half.

“But in the last 15/20 minutes we were good, we should have started like that and after the red card it was better.

“But the feeling is bad, it is a derby and three points we needed but now we go to the next game.”