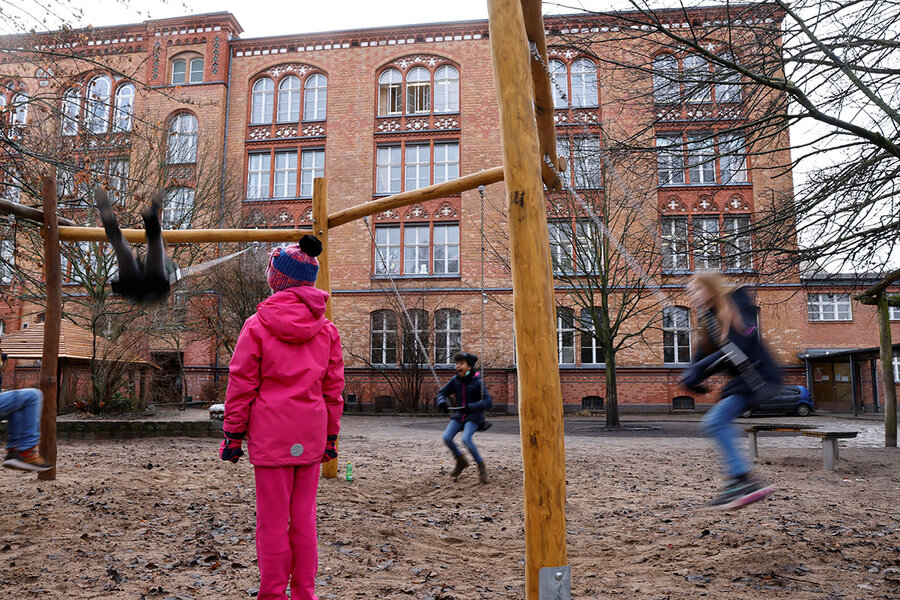 When the German child coach logged onto Zoom for a resilience training event last December, she found 6,000 children ages 5 to 12 across Germany ready to learn about coping.

Germany was nine months into an on-and-off pandemic lockdown. The government had just closed all schools and mandated a no-group-playdate rule that effectively isolated children and their families. Working parents were struggling to balance work with family duties, which meant children’s emotional well-being was often out on the back burner.

Germans expected the government to watch out for their kids. But seeing gaps in support, citizens have stepped up in new ways during the pandemic to look out for children’s emotional needs.

“In a situation like corona, you must have resilience – the ability to deal with change,” says Ms. Frim, who lives in the central German town of Lollar. “Once children have learned and mastered this superpower, they can solve any difficult situation they are put in.”

German politicians during the pandemic have been concerned mostly with the health of older and vulnerable adults, say child advocates, while downplaying the social and emotional needs of children. As the pandemic continued, the government instituted a winter lockdown that was the most stringent yet, banning youth under 14 from meeting with more than one person outside the family; previous lockdowns had exempted them.

Into this gap has rushed a handful of concerned citizens and nonprofits offering online and in-person opportunities for children to gather. Their goal is to help young Germans to weather the pandemic at a critical stage in their development, a time when they should be around peers learning to navigate conflict and develop emotionally.

“Education is only one side of [pandemic losses for young people],” says Jana Liebert, an expert on social security for Germany’s Child Protection Association. “Interaction and learning from other people are immense developmental opportunities that they get through social contacts.”

A call to action

Studies show young people in Germany, as in many countries, are suffering the effects of pandemic isolation. One in 4 German students admitted to being “often unhappy or depressed,” while another study concluded that 18% of children showed mental health problems, nearly double the pre-pandemic rate. These declines in well-being were steeper in Germany than in neighboring Switzerland or Luxembourg.

For Ms. Frim, a software engineer who has a side career helping children, the pandemic became a call to action. In that 6,000-child Zoom session, which was marketed online to parents and children, she and about two dozen other trainers held breakout sessions to tackle mental resilience and well-being. “I saw 50 little faces looking at me,” she says.

Ms. Frim started by asking children in her group to identify their feelings, and differentiate between what feels good and what feels bad. From there she taught them to listen carefully to feelings because they “show me the way like a compass does.”

“If your compass is in the green zone you can lean back and relax, but the red zone means you need to change something,” explains Ms. Frim. The compass of everyone around them must also factor into every situation.

“They practice using that superpower of resilience,” says Ms. Frim, who charges the equivalent of $82 for four-hour online group resilience trainings. “I sometimes describe resilience as the paint you put on your ship. If the resilience paint isn’t on the boat, every little negative comment or situation affects you and makes you sink. We want to give them options for every situation.”

Ms. Frim says she and other trainers from the December Zoom session are being inundated with requests for child resilience training, including from schools.

Having a solid support structure helps children navigate adversity, yet about 3 million children in Germany live in poverty. For Die Arche, one of Germany’s largest private charities, an urgent priority in the pandemic has been maintaining contact with kids from disadvantaged backgrounds.

Teachers and counselors used to provide that critical point of contact outside the home, but as schools and youth centers have closed, disadvantaged kids have struggled in particular, say charity workers. Many are at home all day with parents who might be abusive, neglectful, or simply overwhelmed. (Die Arche works closely with police in cases of violence in the home.)

Cellphones and SIM cards are dropped off so kids can call for help directly. Die Arche staffers and volunteers have provided 2,000 donated tablets and laptops to youth in need during the pandemic, allowing them to learn remotely and access mental health counseling.

The charity also invites kids ages 2 to 15 to congregate at 27 centers across Germany for free play and sports, as well as support for online schooling. These centers provide a substitute for social interaction at a time of school closures. In recent weeks, Germany has begun to reopen primary schools for hybrid learning; secondary schools are still closed.

Learning to navigate the diversity of life via the playground shouldn’t be delayed until later years, nor should it be pushed into the digital world, says Thilo Hartmann, a psychologist and COVID-19 hotline counselor.

In that way, Die Arche’s centers help fill a gaping hole. “Many mechanisms failed that were there before, such as youth clubs, outpatient mental health centers,” says Mr. Hartmann. “Families whose balance depended on these places fell apart.”

The community agrees that Die Arche is doing important work: A fundraiser last year raised 17 million euros ($20 million) to help fund new projects at an organization that has an annual budget of less than 13 million euros ($15.5 million.)

In mid-February, German Chancellor Angela Merkel visited with a dozen or so parents, representing different regions and child age groups, via an online forum. As the parents teared up in discussing their pandemic lives, Chancellor Merkel seemed visibly shaken. She emphasized a new focus on children and promised schools would be first to reopen. (Germany had resisted closing schools for much of 2020, in contrast to many U.S. school districts.)

“I wish I could just come by and take care of your kids for an afternoon, so you could go and have a break – but I can’t,” she said. “I really wish I would never have to make decisions like this.”

There are a few upsides to children’s pandemic isolation. Whatever resilience produced by adverse events endures, and kids are incredibly adaptive, says Chris Cocking, a resilience researcher who teaches at the University of Brighton in the United Kingdom. He says that children may also be developing new and intricate social bonds, both with their own siblings and with new friends they meet online.

This mirrors the unexpected bonds struck between strangers during the pandemic and after traumatic events like terrorist attacks. After a semblance of normalcy resumes, the logistics of daily life can get in the way, Mr. Cocking says, but ultimately those bonds tend to last.

As the pandemic has dragged on, Setareh Ansari worried that her 10-year-old daughter in Germany was losing her ability to socialize. So, she set up an online playdate with a cousin’s daughter in Iran whom her daughter had met during previous visits.

The girls began talking regularly. They chat about their bird and bunny pets. They play-cook. They played cards and dolls. They read to each other in Iranian, because Ms. Ansari’s daughter wants to improve her language skills.

“They’ve met before, but this intense friendship they’ve developed is only because of the pandemic,” says Ms. Ansari, who lives in a small town outside Stuttgart.

Her daughter has also joined an online drawing class with Iranian children and an English class with British children, on top of the digital “pen pal” relationship with her cousin’s daughter.

“This has opened so many new doors for us,” says Ms. Ansari. “It’s so nice to be able to do all these new things now. When my daughter starts school again, she might talk less with [new friends], but they’ll still be good friends.”