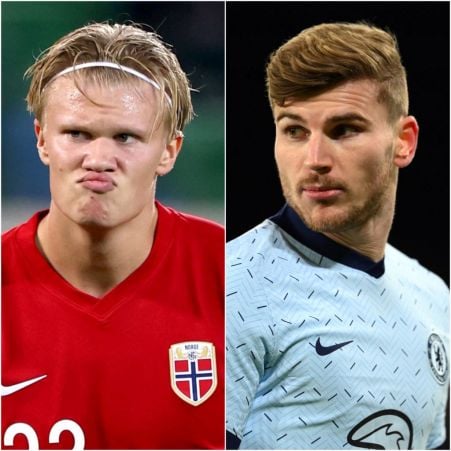 Striker Haaland has become the hottest commodity in Europe, and Chelsea are now mulling shipping out Werner in a part-exchange deal for the 20-year-old in a bid to beat a host of other clubs to the Norwegian’s signature.

Timo Werner could be on his way out of Chelsea after only one season as the Blues contemplate a bold move for Borussia Dortmund sensation Erling Braut Haaland, Football Insider reports. The 25-year-old Werner was one of Chelsea’s most hyped signings of last summer but is said to have failed to live up to expectations.

Striker Haaland has become the hottest commodity in Europe, and Chelsea are now mulling shipping out Werner in a part-exchange deal for the 20-year-old in a bid to beat a host of other clubs to the Norwegian’s signature.

Manchester United are one of those clubs, having made signing Haaland their top priority, the Manchester Evening News reports.

United missed the boat in their bid to sign Haaland last summer but manager Ole Gunnar Solskjaer and football director John Murtough have agreed the centre-forward should be their major target as a long-term replacement for Romelu Lukaku up front. Haaland has scored 37 goals from just 35 games for Dortmund and Norway this season.

Chelsea are also considering a bid for Argentina striker Paulo Dybala, according to France Football. Dybala is one of the main names being mentioned amid talk of a possible restructure at Juventus in the summer. Chelsea would face competition from Tottenham, with both clubs said to be willing to spend up to £47million to acquire 27-year-old, who is contracted until next year.

Gabon international striker Aaron Boupendza is keen on a move from Turkey to the Premier League, with a host of clubs interested, according to 90min.

The 24-year-old currently tops the scoring charts in the Turkish league with 18 goals from 28 games, but wants to leave his club Hatayspor to join countryman, Arsenal’s Pierre-Emerick Aubameyang, in England. Southampton, Tottenham, Leicester, West Ham, Newcastle, Crystal Palace and Wolves are said to be interested, while Aubameyang has also had a word with Gunners bosses.

Midfielder Donny Van De Beek may be preparing to leave Manchester United after just one season, the Daily Star reports. The 23-year-old Dutchman was a high-profile signing for the club last summer but has started only 11 games in all competitions and has requested a meeting with club bosses before the end of the season to decide his future.

Ousmane Dembele: The 23-year-old France forward has been linked with a potential move to Manchester United, but is about to receive a new contract offer from Barcelona, according to Mundo Deportivo.

Cristiano Ronaldo: The 36-year-old Juventus star wants to return to Real Madrid this summer, according to Sky Italia.

Martin Odegaard: Arsenal want to keep the 22-year-old Real Madrid loanee at the club and are exploring an loan extension or permanent deal for the midfielder, the Daily Mail reports.