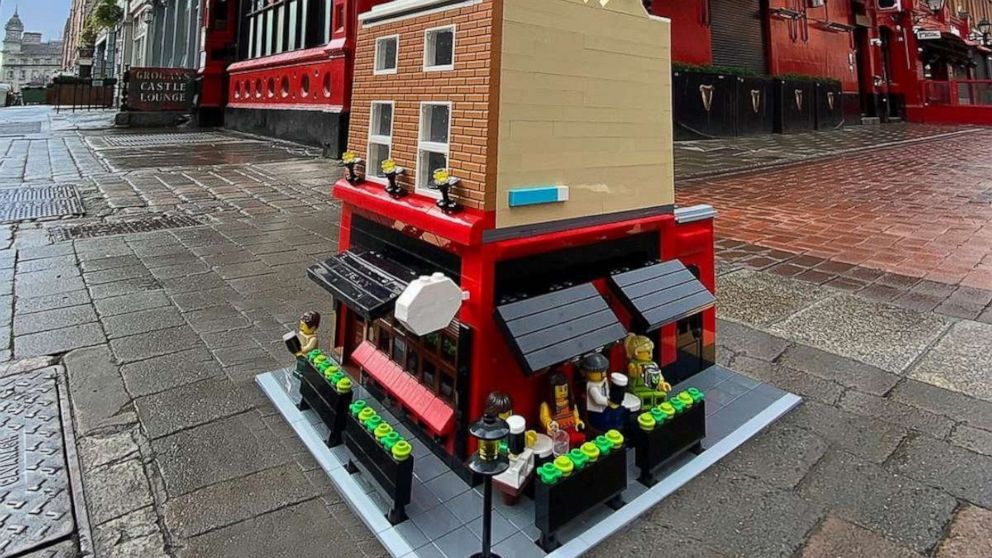 DUBLIN — For most of the past year Ireland’s pubs have been closed by the pandemic, shuttered by one of the world’s stricter lockdowns.

But a Dublin man has spent his lockdown recreating his favorite drinking spots from Lego.

Gianni Clifford, 35, has crafted miniature replicas of more than a dozen of the Irish capitals’ pubs so far, constructed entirely from plastic blocks and with painstaking detail.

“A lot of Dublin’s heart and soul is in its pubs,” Clifford said in his living room in south Dublin recently, sitting at a table laden with his creations. “Where people are welcomed and where you have the chats. And now during these lockdown times, people are away from these, they’re missing these things.”

Ireland went into lockdown last March, with St. Patrick’s Day the first major public event felled by the virus (this year it is being held entirely virtually). That lockdown has become one of the toughest and longest lockdowns in Europe. Apart from a couple of brief spells last summer and in December, Dublin’s pubs have been mostly closed. Only those serving food were permitted to open during the lighter periods of restriction meaning some of the city’s most famous establishments have been closed entirely for more than a year.

Even before lockdown, Clifford, a fan of Lego since childhood, had begun recreating Dublin landmarks and posting them to his Instagram page, Dublin Bricks.

But when he posted photos of his first two pubs — The Long Hall and Grogan’s Castle Lounge — things took off, he said, with people delighted by the tiny tributes to their stricken bars.

The miniature pubs are immediately recognizable by the intricate facades Clifford gives them. He also painstakingly reconstructs the interiors and follows the layout by installing tiny beer taps, pints of Guinness and even toasted cheese sandwiches.

“I really enjoy doing the interiors as well. How can I fit all the things that are in the real pub in this tiny space?” he said.

Clifford said he begins by working out the façade, mainly working from memory and checked against Google. Each pub needs around 3,000 blocks that Clifford sources online either from Lego or a second-hand website and does not use any custom blocks, he said. He estimates he spends around 12 hours working on each pub.

“Multiplied by about twelve to fifteen pubs, it’s a lot of time,” Clifford said. “But we’ve had a lot of time this last year.”

Clifford has a fulltime job as a product designer but his hobby has become more demanding than he expected. He now sells miniature sets of his own designs, including a 200-piece pub replica.

He also has a new baby and, increasingly, is running out of space for the models, he told ABC News.

Clifford said he has not only built Dublin’s famous pubs, but instead focuses on those that he enjoys himself.

“I get a lot of requests to build certain pubs but I kind of like to go with the pubs that I really like. That I actually would go and enjoy drinking in,” Clifford said. One of his replicas is his local, the Harold House, a lime green, old school pub up the street from where he lives.

Ireland’s pubs are not expected to be allowed to reopen until at least June and then it may well be with restrictions on capacity, but its daily virus numbers are falling and mass vaccination is underway, offering some optimism.

“I think we’re moving towards a positive place and looking forward to all these doors — not just the Lego versions but the full versions — being open again,” Clifford said.