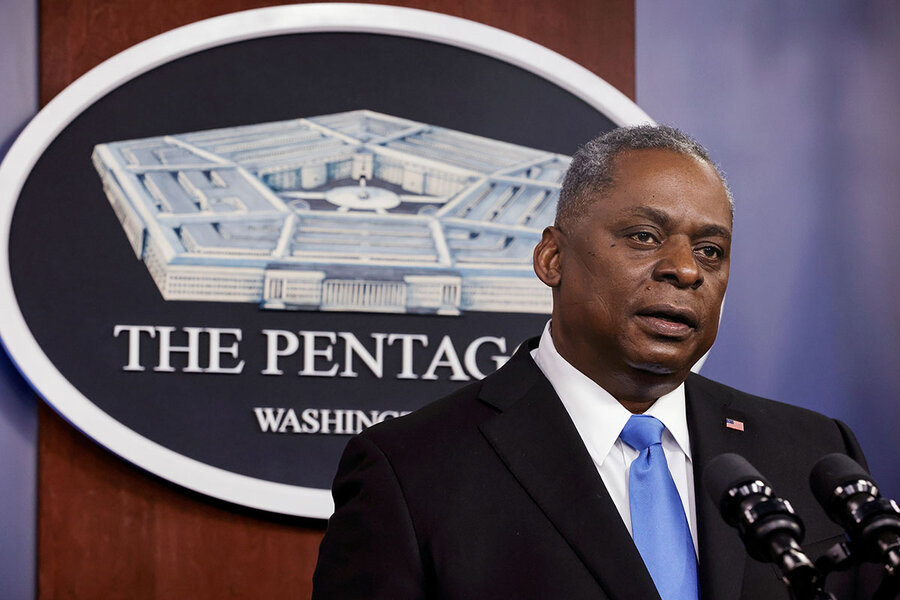 The United States military, as a result, “will act immediately to include the security implications of climate change in our risk analyses, strategy development, and planning,” Secretary of Defense Lloyd Austin said last week, warning that “climate change presents a growing threat” to America’s “defense objectives.”

Yet in an era when Pentagon planners must brace for everything from terrorist attacks to old-school great power battles – and given the colossal carbon footprint the U.S. military produces in its attempts to address these perils – successfully placing climate change at the top of the list of threats will hinge in large part on a key question: How deep does the Pentagon’s environmental ethos run?

“Protecting ourselves from the environment”

It was in 1992, with the U.S. intervention in Somalia, that a growing culture of environmental awareness began to take shape in the Department of Defense (DOD), says Samuel Brannen, senior fellow in the international security program at the Center for Strategic and International Studies. The U.S. was leading a United Nations mission to end civil war and famine in the country, and many U.S. service members were able to see firsthand how catastrophes like drought could affect security.

More recently, in Syria, farmers experienced a stretch of droughts from 1998 to 2012, widely believed to be the worst stretch of sparse rain in roughly 900 years. In the eastern part of the country in particular, people lost their income and 85% of the country’s livestock died as food prices doubled. The desperate farmers, in turn, made easy recruits for armed opposition groups, including Islamic extremists.

Yet bolstering U.S. military defenses against security threats caused by the ravages of climate change worldwide seems disingenuous, analysts note, without acknowledging – and abating – the Pentagon’s own carbon footprint closer to home. The DOD is one of the largest consumers of fossil fuels and, as a result, one of the biggest greenhouse gas emitters on the planet.

But that fact has taken some time to sink in. When environmental mandates came down from the White House while John Conger was serving as assistant secretary of defense for energy, installations, and the environment in the Obama administration, for example, Pentagon officials tended to take the tack that, “OK, we’ll lower emissions, but only in the context of helping our [military] missions,” he says. “Yeah, people would pursue it, but let’s say I didn’t necessarily see enthusiasm across the department.”

Mr. Conger says he got more buy-in, however, when he discussed how flooding caused by rising sea levels was damaging Navy installations – “how it’s more about protecting ourselves from the environment than protecting the environment.”

It was a mercenary argument but also an effective one, particularly with the soaring cost of severe weather damage to U.S. bases due to climate change.

When Hurricane Michael hit Tyndall Air Force Base in Florida in 2018, 95% of the buildings there were either severely damaged or destroyed. The installation was also home to one-third of the service’s pricey fleet of F-22 Raptor stealth fighters, and 17 of the aircraft were damaged when a hangar roof collapsed on them during the storm.

The cost of all these repairs was almost $5 billion; no enemy attack on U.S. bases in Iraq or Afghanistan has ever caused that much damage. A couple of months later, a tornado tore through the base.

“So when the Trump administration said, ‘Well you don’t have to worry about this climate change stuff anymore,’ the reaction [within the Pentagon] was, ‘Well, OK, but we’re going to do it anyway because it affects our mission,’” says Mr. Conger, now director of The Center for Climate and Security.

As a result, the Pentagon has for years pursued a number of alternative energy projects on bases, with fields of solar panels, for instance, installed for free by companies that then sell back the solar-produced electricity to the military at cheaper prices – and with a reduced carbon footprint – than it was getting from its municipal grids.

But repair budgets also need to increase, analysts point out, noting that efficient energy systems don’t work too well when there are holes in the roof. That’s why senior defense officials routinely emphasize the $116 billion in maintenance backlogs on U.S. bases, with nearly one-quarter of military facilities in “poor” condition and roughly another 1 in 10 in “failing” condition, according to the DOD.

On the fuel consumption front – which represents roughly two-thirds of the military’s carbon footprint – there’s much the Pentagon can do to drive the demand for and development of electric vehicles, analysts say. Across the country, the Pentagon leases some 160,000 cars from the General Services Administration for getting around bases, and typically trades them out after three years.

The latest directives could mean putting far more electric vehicles in these fleets. While the vehicle volume wouldn’t put a huge dent in the DOD’s carbon footprint, the sheer market force of the military’s buying power would help boost the electric car industry.

That said, the biggest gas guzzlers are not cars, trucks, or even tanks, but airplanes. And it’s the wide-bodied cargo and tanker planes, rather than, say, the fighter jets that are the biggest carbon emitters. As a result, to make long-standing changes in carbon emissions at the DOD, it’s going to be necessary to invent a new way of powering aircraft, analysts say.

In the wake of the Biden administration’s climate initiatives, such developments could be on the horizon. A study released this week found that airplane fuel made from food scraps, for example, could cut greenhouse gas emissions by 165% compared to fossil energy. Given the Trump administration’s backtracking on climate concerns, many federal agencies “felt they needed to do a 180 on climate change – but not the DOD,” Mr. Conger says.