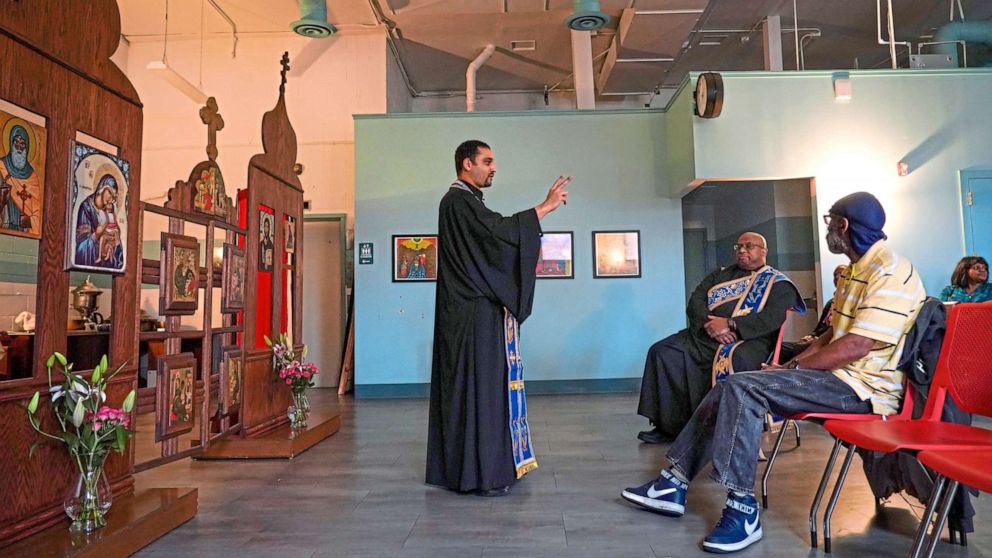 Once the coronavirus outbreak rocked Pittsburgh’s historically Black neighborhoods, Father Paul Abernathy knew that when a COVID-19 vaccine arrived, it would be time to swap his pulpit for the streets in order to convince residents to take the vaccine.

Father Paul, as he’s known to members of St. Moses the Black Orthodox church, donned a yellow neon vest over his Roman collar and began walking door-to-door, infusing faith into his plea for residents to take the vaccine.

“This is very important,” he said to one hesitant neighbor as he knocked on doors in Pittsburgh’s predominantly African-American Hill District. “Sometimes when we pray, he gives us blessing by way of medicine, by way of vaccines.”

“And if we take the vaccines,” said Father Paul, “think about this: Every day that God gives us on this Earth is a gift.”

Across the nation, vaccine hesitancy is not just a matter of race; it’s also a spiritual issue that’s running widespread in many faith-based communities. According to a recent Pew study, nearly 50% of white evangelicals say they won’t take the coronavirus vaccine, as do more than 30% of African-American Protestants.

At the 3,000-member Life Tabernacle Church in Baton Rouge, Louisiana, it’s not uncommon to see many Sunday worshipers streaming into the church without masks.

Last year, at the height of the pandemic and amid state coronavirus lockdown orders, Pastor Tony Spell held multiple services with more than a thousand people in defiance of Gov. John Bel Edwards’ coronavirus restrictions — then sued the governor to keep his megachurch open. Spell has challenged the constitutionality of the restrictions on religious gatherings, but thus far the courts have supported the governor. Spell is appealing the rulings.

Now, a year later, Pastor Spell still stands firm in his decision to hold those Sunday services. And with several vaccines now available to the American public, his message is crystal clear: Don’t take the vaccine.

Besides, he said, “How can you trust a government who in 1945 purposefully [conducted] the Tuskegee Study?”

The federal government’s Tuskegee Study involved 600 African-American men, 399 who had contracted syphilis and 201 who had not, according to the Centers for Disease Control. The men were told by the U.S. government that they were being treated for the disease, but they were actually only being monitored to see how the disease progressed. In 1997, President Bill Clinton formally apologized to the victims on behalf of the country — and today, some still point to the unethical study as a key reason for African Americans’ distrust of government vaccination efforts.

African-Americans are 2.3 times more likely to die from COVID-19 than white Americans, according to a study conducted by the APM Research Lab. Enduring disparities in health care, along with other social and economic inequalities, have resulted in the disproportionately negative impact Black Americans have faced when it comes to COVID-19.

Yet many religious leaders say it’s time to move past the suspicions and the troubling data.

“The hesitation is understandable,” said Cardinal Wilton D. Gregory, who leads the Archdiocese of Washington. “We need to move beyond the historic problems that are clear, and take advantage of the medical discoveries and the scientific aids that are available. History is real, but so is the possibility of a future without this disease.”

All three FDA vaccines authorized in the U.S. — Pfizer, Moderna and Johnson & Johnson — went through large-scale clinical trials involving more than 100,000 volunteers of diverse racial and age populations. The data was made publicly available and scrutinized by independent scientists and career FDA employees before each vaccine was authorized.

Each of the three vaccines was shown to be highly effective at preventing severe illness, hospitalization and death, and likely to help prevent people from spreading the virus once vaccinated. With over 100 million doses administered so far, health care providers are continuing to monitor for any safety concerns. Side effects have been rare, with the most common being soreness where the shot was given, which usually gets better within days.

With the U.S. death toll from COVID-19 now topping 500,000 — and the long-term effects of the disease still not known — the authorized vaccines are highly recommended for anyone who is eligible.

Yet vaccine hesitancy remains a serious stumbling block. According to the Pew study, more than 30% of U.S. Catholics are concerned about taking some or all of the three currently available coronavirus vaccines, because they believe it’s contradictory to a central tenet of their faith.

In the face of moral objections from various faith communities, Johnson & Johnson is standing by the integrity of the process that produced their one-shot vaccine.

“Some of the brightest minds from within our company and from across the global scientific community have worked for years to develop breakthrough treatments to some of the most devastating diseases facing humanity,” a Johnson & Johnson spokesperson told ABC News. “As we do this, we hold ourselves to the highest biomedical ethical standards — even more so in the face of a pandemic.”

Moderna and Pfizer, which used abortion-derived cell lines to perform preliminary testing of their vaccines, did not use them in their vaccines’ production.

“There are no fetal cells from aborted fetuses, that’s tissue or body parts, that are being used in the vaccines,” said ABC News Medical Contributor Dr. Jay Bhatt. “Fetal cell lines are derived from aborted fetuses so that they could replicate and create a clean space for vaccine development, testing and production.”

Prominent pro-vaccine Catholic prelates, including Cardinal Gregory, point to a 2005 Vatican document indicating that the medical community should aim to use vaccines that are ethically produced, but the faithful should use the vaccines that are available. Then this past December, the Vatican issued a decree calling the available COVID-19 vaccines “morally acceptable.”

“While there was some remote moral questioning, the overall effect, which is to protect children, to protect women, to protect society, justified their use,” Cardinal Gregory, who publicly received the Pfizer vaccine in February, said of the 2005 decree. “That same reasoning is what drives the issue now, 16 years later, in specific reference to the coronaviruses and the corona vaccines that are available now.”

“It’s this tug between the science that we have to use in order to get the vaccines safely and effectively produced, against the religious, faith-based history that some communities have,” said Dr. Bhatt.

And while the varying degree of abortion cell-line usage in the vaccine development process has helped drive anti-vaccine pastors like Tony Spell, others in the evangelical community say that the complete rejection of vaccines is wrong.

“I would hope that the pastors in the pulpit would tell people how they can be saved from God’s judgment,” said Franklin Graham, president and CEO of Samaritan’s Purse and the son of the famed late televangelist Rev. Billy Graham. “I think for a pastor to tell someone not to take the vaccine is problematic because what would happen if that person got coronavirus and died?”

For many of today’s televangelists, the message from the pulpit has been evolving.

Pastor John Hagee, who was infected with the coronavirus last year, told his Cornerstone megachurch as he was recovering that “we have a vaccine; the name is Jesus Christ, the son of the living God.”

Doctors say remarks like that make it more difficult to ensure that all communities are protected from the virus.

“The challenges that we’re seeing from the anti-vaxxer community, from religious communities, are also impacting equitable access to vaccines, which I think is a really important issue — particularly in communities of color,” said Dr. Bhatt. “The choice we’re making is one of health, of one of safety, of one of helping us together do the things we need to get to a COVID-free world.”

Hagee Ministries later clarified Hagee’s comments, saying in a statement to ABC News that the pastor’s words were taken out of context.

“Pastor Hagee himself is taking the vaccine,” said Hagee Ministries spokesperson Ari Morgenstern. “Pastor Hagee believes in both the power of prayer and modern medicine. These are not mutually exclusive.”

Billy Graham, who many evangelical leaders continue to admire years after his death, was born at the height of the 1918 flu pandemic, which claimed several members of the Graham family.

“Anytime there was a vaccine or something that could help protect you, he was an advocate for, he took it,” said his son Franklin Graham. “I think if there were vaccines available in the time of Christ, Jesus would have made reference to them and used them.”