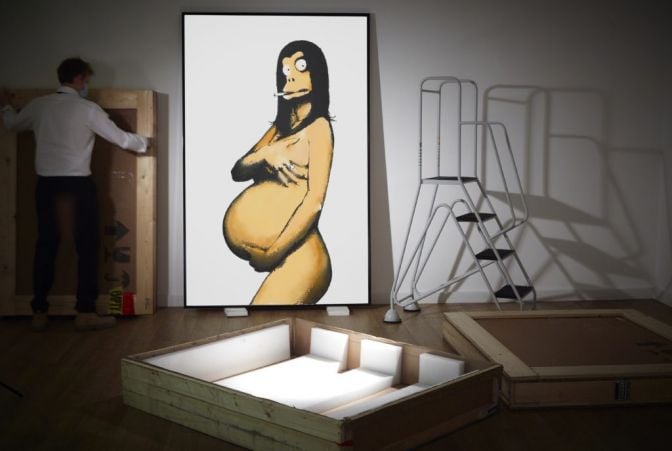 The artwork will be offered at auction in London

The two-metre-tall canvas was unveiled in the graffiti artist’s debut US exhibition in 2006.

It features a naked, heavily pregnant figure clutching her belly but wearing the mask associated with Banksy and smoking a cigarette.

In a poster set against the backdrop of the Hollywood sign, the image was also used to advertise the exhibition, which attracted 30,000 visitors, including Brad Pitt, Angelina Jolie, Keanu Reeves and Cameron Diaz.

Emma Baker, head of contemporary art evening sales at Sotheby’s London, said the painting “embodies the tongue-in-cheek humour, the outrageousness of Banksy in that show. He’s poking fun at celebrity”.

And she added: “It works on many levels, not just parody.

“You can almost see it as like a modern day fertility goddess, especially in a fine art context.

“This is coming at it from a very different angle and it’s very outrageous, but at the same time it’s a painting and it’s a work of fine art.”

She added: “The monkey mask is totally synonymous with Banksy, that’s his proxy as a disguise …  Any photoshoot where Banksy has to represent himself, you see him wearing this monkey mask.”

The exhibition featured a real-life Indian elephant, with a statement: “There’s an elephant in the room… Every day hundreds of people are made to feel physically sick by morons at art shows telling them how bad the world is but never actually doing something about it. Anybody want a free glass of wine?”

The canvas is being sold by a private owner and will be going to auction for the first time.

Original Concept for Barely Legal Poster (After Demi Moore) will be offered at auction in London on March 25th as part of Modern Renaissance: A Cross-Category Sale.

Lord Mountbatten’s custom Jaguar to be offered at auction