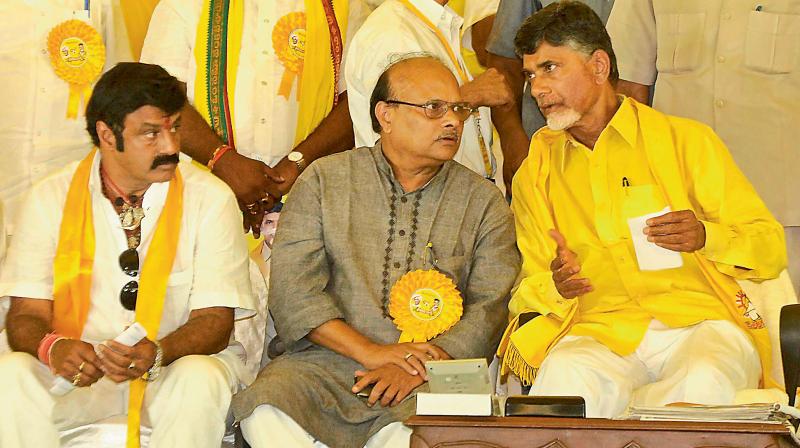 ANANTAPUR: Telugu Desam with a long history of dominance in Hindupur, the home turf for party founder NT Rama Rao,  suffered major shock as the party was relegated to the fourth place in two wards and to the third place in eight wards in the present municipal polls there.

A further jolt was that the MIM won a seat and occupied the second place in 5 municipal wards where Telugu Desam has registered a steep fall in its performance graph.

The week-long serious efforts by film star and MLA Nandamuri Balakrishna too was of no help to the TD. His campaign failed as the party found itself winning only six wards against a total of 38 wards in the special grade municipality.

Balakrishna had stayed at his residence for a week and held roadshows through all wards and connecting villages of the municipality, seeking votes for the TD. The YSRC party especially aimed to grab Hindupur municipality also as it falls in Balakrishna’s constituency segment.

MIM leader Asaduddin Owaisi had also campaigned in Hindupur and fielded strong candidates and proved he could get substantial support from the Muslim segment of the electorate.

In 15th municipal ward, Telugu Desam candidate got just 140 votes and took the humiliating fourth place while the YSRC candidate got 874 votes, MIM 722 votes and the CPI 312 votes to take the third place.

Interestingly, BJP candidate A. Anjali won from the 11th ward where she got 915 votes while nearest rival, the YSRC candidate, got 783 votes, the MIM 255 votes and Telugu Desam just 184 votes to take the fourth place. The TD had ruled the municipality in the last five years as also previously.

The MIM proved its presence in all wards where candidates were fielded and won the 16th ward. There, the MIM candidate got 883 votes and YSRC candidate 760 votes while TD got 143 votes to stay in the 3rd place and the CPI got 122 to remain at the 4th position in the 16th ward.

Further, an independent candidate took the second place in the first ward where the Telugu Desam was satisfied with the third place. The YSRC won the seat.

Analyst L. Prasad observed the MIM has succeeded to poll for it the votes of TD dissidents. “We noticed a competition between YSRC and MIM in many wards, while TD fell below the mark,” he said.

YSRC leader Naveen Nischal claimed that his party’s victory was due to the people's appreciation of the welfare schemes initiated by the chief minister.