People under the age of 50 may have to wait up to a month longer than planned for their Covid vaccination because of a major shortage of vaccines, NHS leaders have said.

The unexpected delay was revealed in a letter to health service chiefs, who have been ordered to stop booking first-dose appointments for anyone under 50 for all of April.

The letter from NHS England explained that the move was necessary because there would be a “significant reduction in weekly supply available from manufacturers beginning in the week commencing 29 March”.

The letter added: “Volumes for first doses will be significantly constrained. This will continue for a four-week period, as a result of reductions in national inbound vaccines supply.”

Government sources suggested the squeeze on supply of the AstraZeneca vaccine was far worse than predicted. But they stressed that the UK was still on course to vaccinate all adults by the end of July, and to honour the administration of second doses on time. There was speculation on Wednesday evening that the shortfall was due to delays in delivery of 10m doses of the AstraZeneca jab from India. A statement from the company did not address the reports but said: “Our UK domestic supply chain is not experiencing any disruption and there is no impact on our delivery schedule.”

The Royal College of General Practitioners branded the impending shortage “disappointing and frustrating for patients” but echoed reassurances that targets would still be met.

Ruth Rankine, director of primary care at the NHS Confederation, said: “It is reassuring that the secretary of state has reaffirmed the government’s commitment to vaccinate all over 50s by 15 April. But putting an embargo on new first-dose bookings for a whole month due to supply constraints will make this an even taller order.”

Although the health secretary, Matt Hancock, argued that the letter outlining the shortage was a standard technical document, this was met with scorn from NHS officials. “The letter is unusual,” one said. “It’s a futile exercise for Hancock to try to downplay it.”

Government sources stressed that the reduction in supply had no immediate link to the bitter row with the EU over vaccines, although the shortage could be compounded after the European commission president threatened to halt exports of Covid-19 vaccines to Britain and secure doses for the bloc’s own citizens unless the UK started shipping doses to the continent.

The foreign secretary, Dominic Raab, hit back with an extraordinary rebuke to Ursula von der Leyen, the European commission president, calling the threats “brinkmanship” of the kind more normally condemned by the UK and EU from “less democratic countries”.

Some vaccinations for people under 50 could potentially still go ahead from mid-April, when the UK is also expecting to start receiving supplies of the Moderna vaccine, subject to the Medicines and Healthcare products Regulatory Agency (MHRA) approval process.

Hancock, who failed to mention the dip in supply during his opening remarks at a Downing Street press conference, was defiant when challenged about the letter. He said the change would be down to “lumpy” supply and a desire to focus on ensuring all over-50s and vulnerable people were vaccinated before moving on to under-50s. 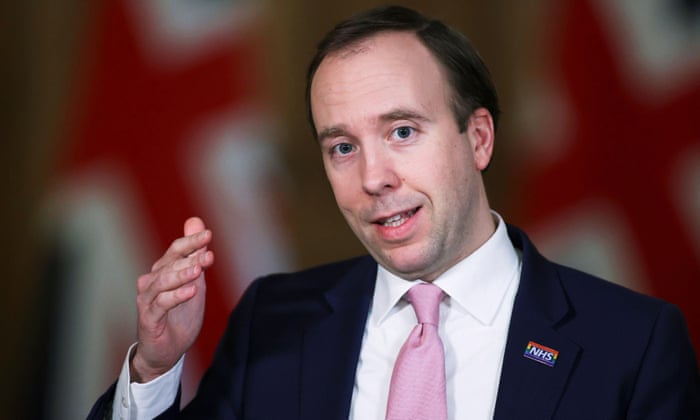 He told reporters: “Now that we’ve opened up to the 50 and overs … then we’re going to really focus on getting the vaccine to those who are the most vulnerable, and of course we have a whole load of second doses that we need to deliver.

“Vaccine supplies are always lumpy and we regularly send out technical letters to the NHS to explain the ups and downs of the supply over the future weeks and [Wednesday’s letter] is a standard one of those letters.”

The letter was sent on the same day that people aged 50 and over were given the green light to book an appointment to receive their first vaccine dose.

Emily Lawson, the NHS England official in charge of the programme, and Nikita Kanani, the organisation’s medical director for primary care, sent the letter to the more than 1,500 vaccination sites which are administering jabs.

NHS sources privately blamed the shortage on the vaccine taskforce, originally set up by the Department of Business, Energy and Industrial Strategy but recently transferred to Hancock’s Department of Health and Social Care (DHSC). It has been widely praised for enabling the UK to press ahead with deploying vaccines from 8 December, weeks before other European countries, by putting in early orders for almost 400m doses from a range of Covid vaccines made by various manufacturers.

But the impending shortage is likely to affect many nations, not just Britain, an NHS official explained. “It’s a global issue. It’s not just us. It’s purely and simply that we aren’t getting through what we thought we were getting through.”

Prof Martin Marshall, chair of the Royal College of GPs, stressed that vaccination sites were dependent on supply of the vaccine and asked the government and NHS to ensure that “any last-minute changes [to supply] are kept to a minimum so that GPs and our teams can make the necessary preparations to ensure that the programme continues to run as smoothly as possible with the supplies available”.

However, some GP leaders speculated that the news might prompt some primary care networks (PCNs) – groups of GP surgeries working together in the vaccineprogramme – to opt out of the deployment to people under the age of 50. NHS England has given PCNs until this Sunday to decide whether or not to be part of that next phase of the rolling programme.

A DHSC spokesman said the department was in contact with manufacturers to try to understand and address when there would be pinch points in supply and said there was no overall change to vaccination programmes, adding: “We remain on track to offer a first vaccine to over 50s by 15 April and all adults by 31 July.”

A spokesperson for NHS England said: “The vaccines task force has done a fantastic job for this country in sourcing vaccine supplies and we are all the beneficiaries of it.”

Jonathan Ashworth, the shadow health secretary, said the news about the drop in supply would cause significant anxiety which could not be dismissed by suggesting the issue was predictable or that the letter was a standard technical instruction.

“Matt Hancock needed to explain exactly what these supply issues are and what he is doing to resolve them,” he said. “Trying to dismiss or downplay the legitimate concerns of anxious people waiting for a vaccine is simply not good enough.”