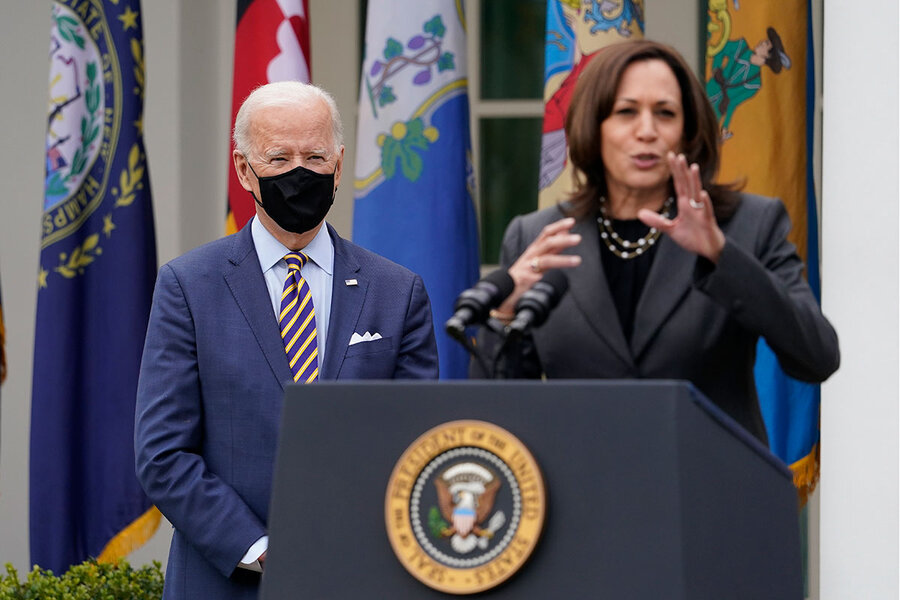 President Joe Biden, Vice President Kamala Harris, and their spouses are fanning out across the country this week, “selling” the $1.9 trillion American Rescue Plan.

But wait, one might ask, isn’t the American Rescue Plan (ARP) already signed into law? And isn’t it already popular – as seen in a Pew Research Center poll showing 70% support among U.S. adults?

President Donald Trump built his political brand on his personality. President Joe Biden’s focus on his team signals a different approach to connecting with voters.

What’s really happening is a multipronged effort to heed a major lesson of the early Obama years and launch the first big Democratic salvo of the 2022 midterms. At the same time, Mr. Biden seems to be recasting the American presidency as more of a team effort after four personality-driven years of Donald Trump.

In key ways, “Joe Biden is trying to de-center the presidency from a person and center it on the Cabinet functions and on those other than the president of the United States,” says Kathleen Hall Jamieson, director of the Annenberg Public Policy Center at the University of Pennsylvania.

That doesn’t mean President Biden has been reluctant to fully wield the power of his office; he signed a record number of executive orders in his opening days as president. And, Professor Jamieson adds, it’s still essential that Mr. Biden address the public directly to explain his decisions.

But as a public presence – be it on social media or in his dealings with the press corps – the new president has often ducked the spotlight where President Trump flooded the zone. Mr. Biden has waited longer than any new president in a century to hold a formal press conference, though one is now scheduled for March 25. Mr. Trump frequently engaged with reporters, sometimes at length, even if he, too, rarely held press conferences.

Mr. Biden’s propensity for gaffes, a staple of his decadeslong political career, may be behind some of the reluctance to put him under the klieg lights. His low-key presidential campaign, restricted by the pandemic, may even have been key to his victory last November (though Mr. Biden did well in his two debates against Mr. Trump, Ms. Jamieson says, “and that’s a difficult venue”).

Pleas from White House reporters for a formal, televised questioning of the president may be the least of Team Biden’s worries right now. Shaping voters’ perceptions of the ARP could be crucial to Democrats’ hopes of keeping their razor-thin majorities in both houses of Congress.

For Mr. Biden, who served eight years as vice president, the parallels between today and 2009 – when he and President Barack Obama took office amid a global financial crisis – seem to weigh heavily.

At an event earlier this month, Mr. Biden recalled telling President Obama back in 2009 that he needed to do more to make sure Americans understood what his big economic rescue package had done to help average citizens. Mr. Obama, he said, told him he didn’t want to “take a victory lap.”

Dan Pfeiffer, a former top Obama aide, recently wrote that he doesn’t disagree more could have been done, but adds that “it wasn’t for lack of trying. … It was nearly impossible to break through the avalanche of bad news.”

The Democrats’ shellacking in the 2010 midterms – following the rise of the conservative, populist tea party movement sparked by bank bailouts – is seared in the party’s collective memory. And in the 2022 elections, the margin for error is much smaller, with a 50-50 Senate and only a five-seat Democratic margin in the House.

Another former Obama White House aide, Eric Schultz, suggests that it’s not quite fair to compare the circumstances of 2009 with today, saying that a global financial crisis and a public health emergency are “apples and oranges.”

Today, “the fact that a lot of what was passed can immediately be felt is going to make a huge difference,” says Mr. Schultz, who consults for the former president.

But Team Biden isn’t taking any chances, as this week’s public relations blitz makes clear: The president traveled Tuesday to Pennsylvania and on Friday heads to Georgia, two of the five Trump states from 2016 that Mr. Biden won last November.

Vice President Harris and her husband, Doug Emhoff, held events Monday and Tuesday in Democratic-leaning Nevada and Colorado. First lady Jill Biden, a professor whose travels this week have focused on education, headed to Democrat-dominated New Jersey on Monday and will visit battleground New Hampshire on Wednesday.

The question of when Mr. Biden will finally have a press conference has been a favorite topic on Fox News – and among the White House press corps – but hardly matters to voters, political analysts say.

It’s “a press obsession, not a public one,” Karlyn Bowman, an expert on polling at the American Enterprise Institute, writes in an email.

Still, the fact that Mr. Biden has waited so long means that when he does finally have one, the stakes will be higher, says Martha Joynt Kumar, an expert on presidential communications at Towson University in Maryland.

“A solo press conference can be a high-wire act,” Professor Kumar says. With each passing day, “they’re moving the wire higher up. And the president has a shorter pole.”

In addition, she says, the longer Mr. Biden waits, the more tough issues rise up – such as immigration, and the thousands of unaccompanied children who have amassed on the U.S.-Mexico border.

Presidential scholar George Edwards III sees the prospect of Mr. Biden’s first press conference as important only for its informational value, and not carrying much ability to influence public opinion, given how polarized voters are.

Still, there’s no doubt that Mr. Biden’s PR strategy within his first 100 days in office has established a sharp contrast with his predecessor. While Mr. Trump often wouldn’t share the limelight, Mr. Biden is all about using the resources at hand.

The White House press secretary, Jen Psaki, briefs daily, and often brings Cabinet secretaries, presidential advisers, and other subject-matter experts to the podium for 10- to 20-minute Q&A sessions before taking questions herself. Frequently, she’ll tell reporters to ask a particular agency or Cabinet department for answers, suggesting a return to a White House that delegates rather than trying to micromanage.

“Biden’s self-confidence is such that he can make use of other resources,”  says Professor Edwards of Texas A&M University.