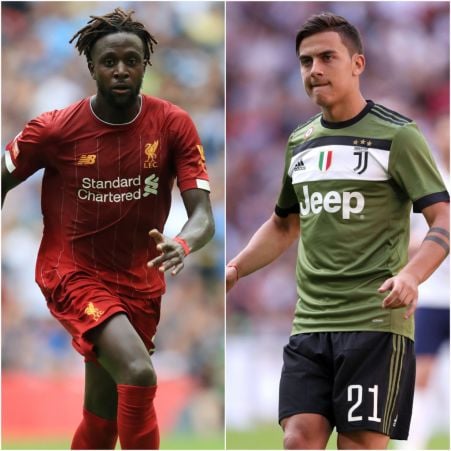 Divock Origi could be on his way out of Liverpool, with Borussia Dortmund possibly interested in reviving the Belgium striker’s career, Football Insider reports. The 25-year-old has fallen out of favour at Anfield and has come into focus for Dortmund due to a likely reduced price tag of £12million, after Liverpool received no offers at £20m in January. Origi has scored only once this season and has been given limited opportunities.

Paolo Dybala has moved closer towards a switch to England, with Juventus saying they are prepared to sell him and Tottenham firming in the market to sign him, the Daily Star reports. Chelsea have also been linked with the 27-year-old Argentina forward, but their manager Thomas Tuchel is said to feel Dybala is too similar in profile to his other forwards. Spurs unsuccessfully tried to sign Dybala when Mauricio Pochettino was in charge, and are still said to be interested.

Tuchel will, however, be striving to sign a new No 9 this summer, the Daily Mail reports. The paper says despite an expensive forward contingent including Timo Werner, Kai Havertz and Hakim Ziyech, the Blues are still missing “a special ingredient”. This would explain why Roman Abramovich has made signing Borussia Dortmund sensation Erling Braut Haaland his top priority, but with Chelsea apparently not high on Haaland’s wish list, luring Sergio Aguero as he departs Manchester City could also be an option, the Mail says.

Major Premier League clubs are said to have their eye on 22-year-old French goalkeeper Alban Lafont, the Daily Mail says. The 22-year-old has shone this season on loan from parent club Fiorentina to Nantes, and is being hailed as the natural successor to Tottenham’s Hugo Lloris for the French national side. Arsenal have previously shown interest in the stopper, said to be one of the best passing keepers around due to his earlier years as an attacking midfielder.

Manchester United boss Ole Gunnar Solskjaer insists Portugal full-back Diogo Dalot has a future at the club despite having been loaned out to AC Milan, according to the Manchester Evening News. United bought the 21-year-old for £19m from Porto in 2018, but injuries restricted his opportunities until he eventually shipped to Milan. But he has maintained fitness there and started in eight of their nine Europa League games, leading Solsksjaer to say he is “looking forward to having him back”.

Mohamed Elneny: The 28-year-old midfielder wants to sign a new contract at Arsenal, having been welcomed back by Mikel Arteta after Unai Emery loaned him to Besiktas, the Evening Standard reports.