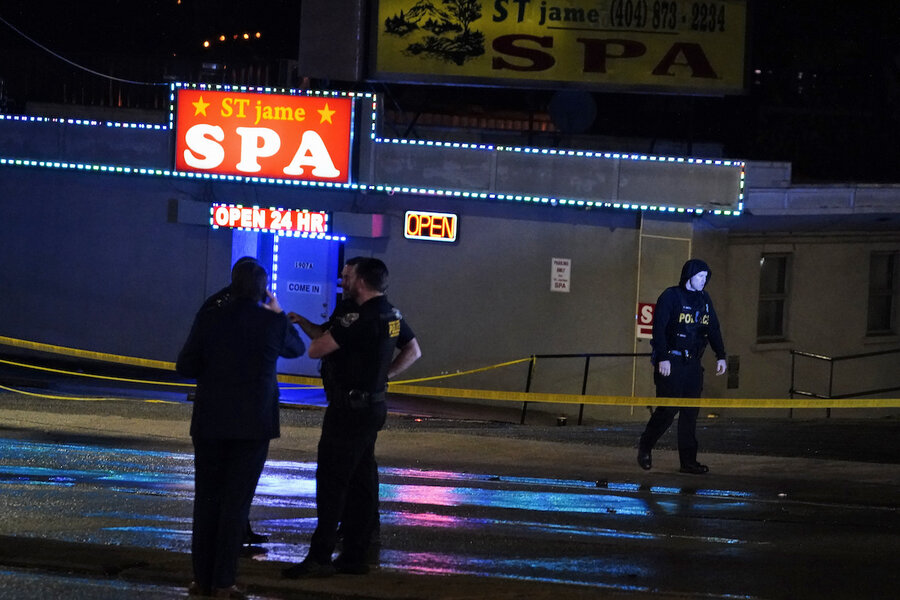 A series of shootings over nearly an hour at three Atlanta-area massage parlors left eight people dead and raised fears that the attack was yet another hate crime against Asian Americans.

Police arrested a Georgian man and said the motive wasn’t immediately known, though many of the victims were women of Asian descent.

“We’re in a place where we’ve seen an increase in hate crimes against Asian Americans since the pandemic started,” said Georgia state Rep. Bee Nguyen. “It’s hard to think it is not targeted specifically toward our community.”

About an hour later, police responding to a call about a robbery found three women dead from apparent gunshot wounds at Gold Spa near Atlanta’s Buckhead area, where tattoo parlors and strip clubs are just blocks away from mansions and skyscrapers in one of the last ungentrified holdouts in that part of the city. While there, the officers learned of a call reporting shots fired at another spa across the street, Aromatherapy Spa, and found another woman apparently shot dead.

“It appears that they may be Asian,” Atlanta Police Chief Rodney Bryant said.

Little is known about the suspect, Robert Aaron Long, of Woodstock, and authorities haven’t specified charges.

While the motive for the attack also remained unclear, many members of the Asian American community saw the shootings as an attack on them, given a recent wave of assaults that coincided with the spread of the coronavirus across the United States. The virus was first identified in China, and then-President Donald Trump and others have used racially charged terms like “Chinese virus” to describe it.

Over the past year, thousands of incidents of abuse have been reported to an anti-hate group that tracks incidents against Asian Americans, and hate crimes in general are at the highest level in more than a decade.

“We are heartbroken by these acts of violence,” Asian Americans Advancing Justice–Atlanta said in a statement. “While the details of the shootings are still emerging, the broader context cannot be ignored. The shootings happened under the trauma of increasing violence against Asian Americans nationwide, fueled by white supremacy and systemic racism.”

Police in Atlanta and other major cities deplored the killings, and some said they would increase patrols in Asian American communities. Seattle’s mayor said “the violence in Atlanta was an act of hate,” and San Francisco police tweeted #StopAsianHate. The New York City Police counterterrorism unit said it was on alert for similar attacks.

Other civil liberties groups and prominent Americans also expressed their dismay. The Rev. Bernice King, daughter of the Rev. Martin Luther King Jr., said she’s “deeply saddened that we live in a nation and world permeated by hate and violence. I stand with Asian members of our World House, who are a part of our global human family.”

Former President Barack Obama regretted that “even as we’ve battled the pandemic, we’ve continued to neglect the longer-lasting epidemic of gun violence in America.” While acknowledging that the shooter’s motive was not known, he said “the identity of the victims underscores an alarming rise in anti-Asian violence that must end.”

Surveillance video recorded a man pulling up to the Cherokee County business about 10 minutes before the attack there, and the same car was spotted outside the Atlanta businesses, authorities said. A manhunt was launched, and Mr. Long was taken into custody in Crisp County, about 150 miles south of Atlanta, Mr. Baker said.

Video evidence “suggests it is extremely likely our suspect is the same as Cherokee County’s, who is in custody,” Atlanta police said in a statement.

South Korea’s Foreign Ministry said in statement Wednesday that its diplomats in Atlanta have confirmed with police that four of the victims who died were women of Korean descent. The ministry said its Consulate General in Atlanta is trying to confirm the nationality of the women.

Crisp County Sheriff Billy Hancock said in a video posted on Facebook that his deputies and state troopers were notified Tuesday night that a murder suspect out of north Georgia was headed toward their county. Deputies and troopers set up along the interstate and “made contact with the suspect,” he said.

A state trooper performed a PIT, or pursuit intervention technique, maneuver, “which caused the vehicle to spin out of control,” Mr. Hancock said. Mr. Long was then taken into custody “without incident.”

Crisp County sheriff’s spokeswoman Haley Wade said Wednesday morning that Mr. Long, who is white, is no longer in their custody and that her office has turned over its information to the other Georgia agencies and the FBI.

U.S. Secretary of State Antony Blinken, who is in South Korea meeting with Foreign Minister Chung Eui-yong, mentioned the killings during an opening statement.

“We are horrified by this violence which has no place in America or anywhere,” he said.

“Our entire family is praying for the victims of these horrific acts of violence,” Gov. Brian Kemp said Tuesday evening on Twitter.