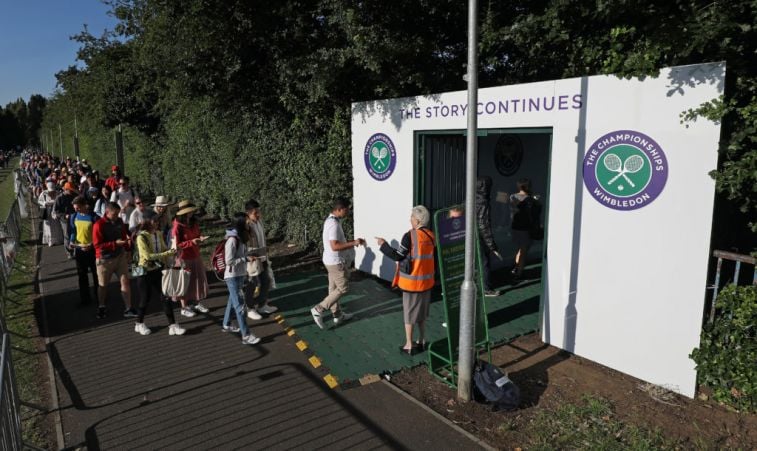 There will be no queuing at Wimbledon this year, © PA Archive/PA Images

Wimbledon’s famous queue will not operate for this summer’s Championships, the All England Club has confirmed.

The snake of people and tents in Wimbledon Park has become one of the defining sights of the event as tennis fans camp out overnight to secure access to the show courts, but coronavirus restrictions mean tickets will be distributed differently this year.

There will also be no reselling of tickets within the grounds, and a Wimbledon statement read: “Both the queue and ticket resale remain much-loved and important Wimbledon traditions and we look forward to their return in 2022.”

The AELTC has provided an update on plans for The Championships 2021, including public capacity, ticket distribution, the Queue and more ⬇️#Wimbledon

Organisers are working on the basis a reduced number of fans will be allowed into the grounds but are trying to be as flexible as possible to accommodate whatever the social distancing requirements are in June and July.

Everyone who secured tickets through the public ballot for the 2020 tournament, which had to be cancelled, will be given the opportunity to purchase the same tickets for this summer.

Wimbledon then anticipates an online platform for general ticket sales opening in June.

It had already been revealed that players, their support teams and officials would be required to stay in official hotels rather than private houses, while the invitation doubles events for former greats will not be held.

All England Club chairman Ian Hewitt said: “These remain challenging and uncertain times and our thoughts continue to be with all those affected by the pandemic.

“Although the promise of a return to a more normal existence is on the horizon, we are not there yet.

“As such, we have taken some key decisions in order to provide us with some certainty in our planning and yet also to retain flexibility where we need it the most.

“We remain committed to delivering on our aspiration of staging the best Championships possible.

“In line with the UK Government’s roadmap, we are cautiously optimistic that the Championships will play an exciting role as the country begins to embrace a return towards normality.”

The AELTC also revealed it hopes to commence development of the Wimbledon Park site next door in 2022, with the intention of staging qualifying for the main tournament within the grounds by 2028.