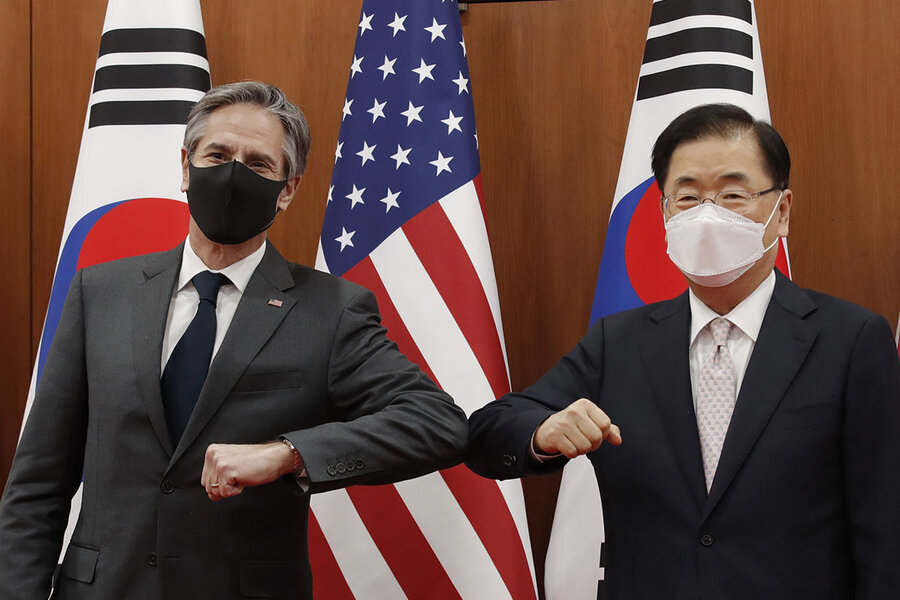 In that sense, the U.S.-led assistance effort was an early stab at countering the regional ambitions of a rising China.

By dispatching Secretary of State Antony Blinken and Defense Secretary Lloyd Austin together to Tokyo and Seoul this week, Mr. Biden aims to demonstrate that America’s alliances and cooperation with key democratic partners are back, aides say.

The trips also are recognition, some regional analysts say, that the U.S. has some catching up to do in what is perhaps the 21st century’s most critical region.

“There was a clear recognition in the administration that the United States had lost ground in Asia … and they needed to quickly build up a united front to deal with China on a range of issues,” says Michael Green, former National Security Council senior director for Asia under President George W. Bush and now senior vice president for Asia at the Center for Strategic and International Studies (CSIS) in Washington.

On Thursday, Mr. Blinken will carry with him the message from his meetings with democratic partners in the region when he meets in Anchorage, Alaska, with Chinese Foreign Minister Wang Yi.

Moreover, the two top national security officials’ Asia trip follows a first-of-its-kind summit last Friday of the leaders of the four countries of the Aceh effort – now more formally organized as the Quad. Mr. Biden initiated the summit as a way to demonstrate a foreign policy of values that is focused on “addressing people’s needs at a very basic level,” as one senior administration official says.

The 90-minute, four-leader forum resulted in an ambitious coronavirus vaccination distribution plan marshaling each country’s strengths to deliver 1 billion vaccines to Southeast Asia by the end of 2022. Other areas pegged for stepped-up cooperative action include climate-change mitigation, infrastructure development, and access to rare-earth metals.

“We are united by our democratic values and our commitment to a free, open, and inclusive Indo-Pacific,” Indian Prime Minister Narendra Modi told his counterparts at the opening of the virtual summit. “Our agenda today – covering areas like vaccines, climate change, and emerging technologies – make the Quad a force for global good.”

Yet if Mr. Biden chose the Indo-Pacific region for the inaugural run of his “values-based” foreign policy, it was to underscore how offering an alternative to China’s vision for the region has only grown in importance in the nearly two decades since the Indian Ocean tsunami.

Underscoring the stakes of the Biden administration’s foray into what China increasingly considers its backyard are the divergent approaches to “vaccine diplomacy” being pursued by the U.S.-led Quad countries on the one hand and by China on the other.

The differences between the two approaches could hardly be more stark.

China is well ahead in terms of regional COVID-19 vaccine distribution, but its approach has invited criticism over what many see as an aggressive and nationalist diplomacy that puts Chinese interests first. As one example, the Chinese government this week announced that it would begin admitting vaccinated foreigners at airports and other ports of entry – but only those foreigners carrying proof of having been administered a Chinese-produced vaccine.

On the other hand, the Quad countries’ vaccine initiative calls for tapping into each country’s strengths: harnessing India’s production capabilities in conjunction with U.S. biotech expertise, Japanese funding, and Australia’s logistics prowess.

In many ways, Mr. Biden’s Quad summit and the Blinken-Austin visits to Tokyo and Seoul are stage-setters for Secretary Blinken’s meetings with Foreign Minister Wang – chief diplomat of the country the secretary of state has in recent weeks described as America’s and indeed the “free” and liberal world’s chief rival and adversary. (After Seoul, Secretary Austin heads to New Delhi for discussions on enhancing military-to-military cooperation between the U.S. and India.)

Mr. Blinken’s expected message to Mr. Wang: This past week demonstrates not just that we are back in Asia, but that we intend to build a secure, prosperous, and free Indo-Pacific through our alliances and partnerships with democracies in the region.

Calling China in a speech last week the one country able “to seriously challenge the stable and open international system,” the chief U.S. diplomat said managing the U.S.-China relationship was likely to be the “biggest geopolitical test of the 21st century.”

Senior administration officials said Tuesday that Mr. Blinken – who will be joined in the Anchorage meetings by President Biden’s national security adviser, Jake Sullivan – does not expect to make any major announcements after meeting Chinese officials. Instead, the talks aim to set the tone and lay out the agenda of concerns – from China’s economic coercion of U.S. allies and partners to provocative military activities and human rights – for a “broader strategic conversation” going forward.

“We think it’s really important that each side understands where the other side stands,” says one senior administration official.

For regional analysts, the Biden administration’s Indo-Pacific week also is demonstrating that the U.S. intends to compete with China by building with regional partners a model that is better than China’s at meeting people’s aspirations for freedom and prosperity.

Mr. Green at CSIS says wrapping up the administration’s Asia week with meetings with senior Chinese officials “is a very smart play.” America’s Indo-Pacific partners and the Quad countries in particular “do not want the containment of China; they don’t want complete decoupling,” he says. “They want the U.S. to compete but be able to cooperate with China where it’s in our interests.”

Mr. Blinken is expected to sprinkle a tough stance in Anchorage with hopes for cooperating with Beijing on issues of mutual interest, including climate change, Afghanistan, and, Mr. Green adds, perhaps even Myanmar.

The question now for some regional analysts is whether the U.S. sticks to a comprehensive, values-driven diplomacy in the Indo-Pacific, or if a sense of the growing urgency to confront China prompts a shift to more hard-power initiatives like stepped-up joint military exercises and inter-military cooperation.

“The rhetoric from the Quad summit was reassuring and the emphasis on promoting the public good, with the vaccine initiative and climate change and infrastructure investment, was a very positive development,” says Sarang Shidore, a senior fellow at the Council on Strategic Risks in Washington.

“But China is the deeper reason the Quad was even born,” he adds, “and what I find worrying is that despite the recent attention to the values of the group, which include peace and inclusion, the military aspect has not really been pulled back.”

Pointing to Secretary Austin’s stop in New Delhi, Mr. Shidore says he sees the risk of a regional policy based on values and mutual interests shifting increasingly to an emphasis on China’s “compellence and containment,” something he says America’s regional partners don’t want.

And he says it is the U.S., as the Indo-Pacific regional powers’ “most powerful and consequential” partner, that will determine which course the region follows.

US, China spar over world order during their first meeting under Biden