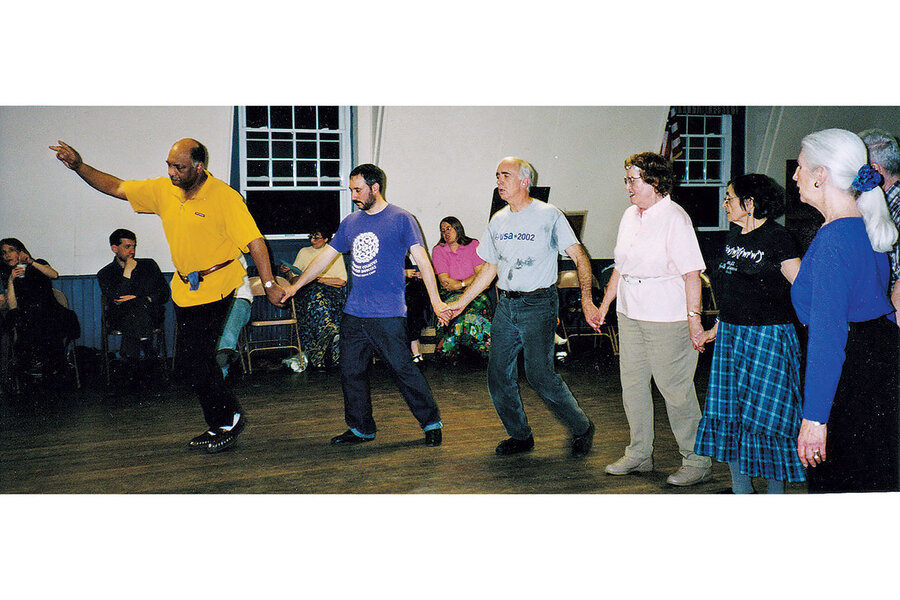 Dance etiquette was a shock. I found myself dancing in lines while holding hands with other men. What would Grandma Nana have said? She’d taught me, in no uncertain terms, the norms of behavior as far as she was concerned. Another of these was never to stare at someone, lest it be seen as a threat. That was a lesson I had to abandon quickly. How could I learn from a dance instructor without staring at them?

Chrissie and I stuck with it – or, rather, Chrissie stuck with me as I struggled. I gauged my progress by the decline in injuries to those around me. It was humbling to see others cringe based on painful prior contact. But there was usually a shortage of men at folk dances, so I could at least fill space or be an emergency substitute, neither of which reflected well on my folk dancing prowess.

But I was determined. I began attending multiple dance groups far afield on my own to expedite my progress. In remote areas of New England, where persons of color were seldom seen outside of TV crime dramas, there were lots of dropped jaws. Astonishment became alarm when, after a bruising initial session, I’d keep showing up.

I wasn’t trying to be mean, but my focus made me less sensitive to others’ stress. My quick-footedness should have been a blessing – except that it also made me inescapable. Experienced dancers who wore an extra belt for people to grab onto during fast, energetic dances were in danger of torn clothing if I grabbed the wrong belt – and there was no stopping for wardrobe malfunctions. Sincere, quick apologies ensued. I was just trying to get better.

I inspired fear, but I was not immune to it. Few things frightened me the way one particular dance teacher did. She was determined that I learn couple and set dances, in addition to line dancing. I could not count on an understanding Chrissie as my partner, so this was dangerous territory. When I saw couple dances coming up on the program, I’d retreat to the safety of the men’s room. This teacher would find me and demand that I come out – or she would come in. So I learned couple and set dances, too.

The turning point came when I finally mastered a few of the most difficult dances. Not many participants could lead these dances, so my ability to do so began to break down barriers. Even my detractors would seek me out to lead those dances, because they were also favorites. As I became recognized for my hard-won competence, I felt motivated to reach out to help others. By my fifth year I was regularly teaching and coaching, finding ways to connect with those needing help. As I had already broken every rule and made every mistake possible, I was well suited to this task. And that, in turn, helped me win forgiveness.

The lesson for a loner like me was in seeing the experience in terms of connecting with others more than simply mastering movement. Dance became a medium for friendships I never would have imagined. Patience, graciousness, compassion, and camaraderie propelled me from unfamiliarity to accomplishment. Those qualities, my wife’s encouragement, and that transcendent view of dance colored and informed the way I danced. As I grew in skill and mastered technique, I was no longer a danger to those around me. But more important, I was dancing more soulfully, more gracefully. And limited views of race gave place to a more inclusive sense of siblinghood.

My wife and I achieved our goal of quality time together. And by embracing a new experience, we found to our surprise that we had also embraced others.

Oscar nominees: Adding up the ways the field changed this year