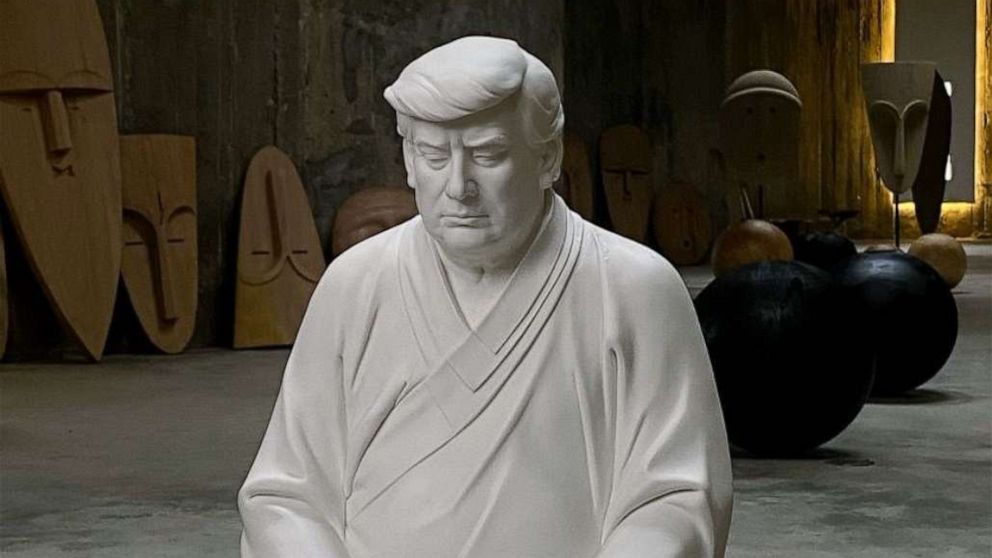 HONG KONG — By no means is former President Donald Trump famous for his Zen-like qualities, but that’s exactly how he has been dreamed up by one artist in the southern Chinese city of Xiamen.

The 45th president of the United States, casted in ceramic, is as the world has never seen him before — draped in robes, cross-legged, with his eyes gently closed as if in a deep meditative state.

ABC News approached the creator of the Trump Buddha statue, Hong Jinshi, with one major question in mind: why?

“Trump is successful any way you look at it, yet he’s still fixated on little things, always causing ruckus. But this figure is very peaceful. This and Trump’s personality are the extreme opposites. I think the juxtaposition is particularly interesting. It’s a collision,” Hong said.

Hong, who normally designs furniture, was inspired by one of Trump’s nicknames in China: ‘King of Knowing Everything’.

“There are a lot of videos where Trump gives the impression that he understands everything,” explained Hong, “So this image is of him in a state of all knowing, no one else can compete”.

Yet he insists it’s not a politically charged piece, “Trump sometimes feels that he is special. I just find him quite amusing.”

The statues are sold online, along with the description, “Make your company great again!” Depending on size, a Trump Buddha statue can set you back between $150 and $610.

One buyer, who spoke to the Global Times, said that they purchased the statue as a reminder to stay humble: “Trump can also be regarded as a representative of an era, and extreme egoism. Now the era has passed but I want the statue to remind me: Don’t be too Trump.”

Despite photos of Hong’s Trump Buddha creation becoming a viral hit in China, it hasn’t been a profitable business so far. That’s mainly because so many fake copies of his art have started popping up on e-commerce platform Taobao.

While Hong and his team are trying their hardest to get the fakes taken down from the site, the artist is also taking it as a form of flattery. “From another point of view, it makes me happy seeing [the pirated versions].”

Hong hopes Trump may have seen the statue by now and would be more than happy to one day gift Trump one himself. It’s not yet clear, however, whether his next installment will be a Buddha Biden.