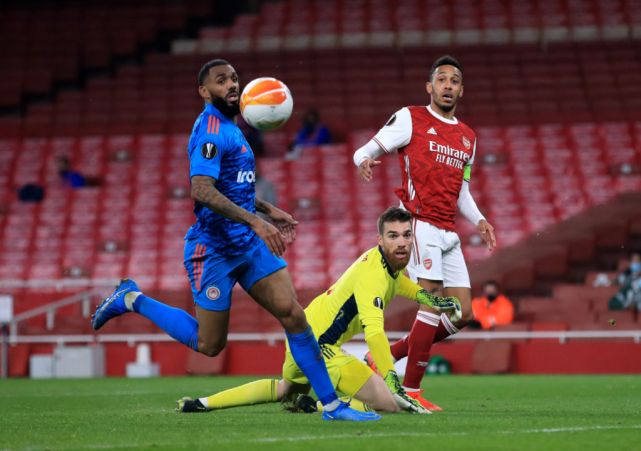 Recalled Arsenal captain Pierre-Emerick Aubameyang missed a number of clear-cut chances as the Gunners made heavy weather of progressing to the Europa League quarter-finals against 10-man Olympiacos.

Holding a 3-1 victory from the first leg in Greece, a poor display saw Mikel Arteta’s side lose 1-0 at the Emirates Stadium but advance on aggregate.

Arteta opted to recall Aubameyang after axing his captain for the north London derby win over Tottenham four days earlier following a breach in pre-match protocol.

But the skipper would pass up a number of opportunities to kill off the tie, with Youssef El-Arabi scoring in a third successive game against Arsenal to earn the Greek champions victory on the night despite the dismissal of Ousseynou Ba.

It had been a similar story in the round of 32 meeting between the sides last year, El-Arabi scoring the last-minute goal to send Olympiacos through as Aubameyang missed a sitter with virtually the last kick of the game.

Thankfully for Arsenal, the work had been done a week earlier in Athens this time around but Arteta will know they need to be much better in the next round if they are to keep alive their hopes of lifting the Europa League.

Arsenal created the better chances of a dull first half, Nicolas Pepe bursting through on goal and taking the ball around Jose Sa – but his effort was just about cleared behind for a corner by former Arsenal defender Sokartis Papastathopoulos.

At the other end, Bernd Leno was called into action for the first time as a long goal-kick completely wrong-footed the Arsenal defence with El-Arabi seeing his shot saved.

The hosts should have taken the lead at the midway point of the first-half, Aubameyang exchanging passes with Dani Ceballos before firing over.

Olympiacos would open the scoring after coming out for the second half on the attack.

El-Arabi would again be the man to get the goal as he converted past Leno with the aid of a deflection off Gabriel Magalhaes.

But the first hour of the game was summed up when Kieran Tierney’s low cross was hammered goalwards by Pepe – only for it to cannon up and over off the head of Emile Smith Rowe.

Arsenal were suddenly all at sea, giving away possession in their own half, unable to make forward passes in more dangerous positions and struggling to go toe to toe with a side they comfortably beat last week.

When they did break through on goal, they were wasteful – Odegaard ballooning over a good opportunity to level on the night.

Not for the first time, Aubameyang then missed a glorious chance, bursting free from the half-way line but poking a chipped effort well wide of the target.

The Olympiacos bench had been noisy all evening but was apoplectic when referee Carlos Del Cerro Grande sent off Ba with a little under 10 minutes to go.

The defender caught Arsenal substitute Gabriel Martinelli with a stray arm to earn a caution – with the second yellow following straight after as he protested against the initial decision.

Ba watched on from the tunnel, visibly upset and being consoled by backroom staff.

Aubameyang meanwhile, continued to miss good chances, seeing a flick from six yards saved before acrobatically volleying the rebound over the top.

Arsenal saw out the remainder of the game to advance, but it was not the sort of performance to appease Arteta.