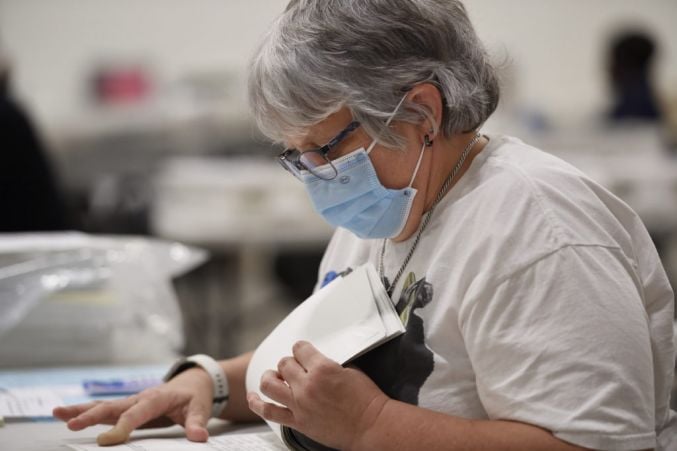 In the January 2nd call, Trump pressured Raffensperger to “find 11,780 votes,” the number Trump needed to win in Georgia

The Georgia secretary of state’s office said it had just 45 minutes notice of Meadows’ arrival in Cobb County, and it barred him from the room where state investigators were examining the absentee ballot signatures. A day earlier, Trump had publicly complained that the audit was moving too slowly after making baseless claims that Georgia’s signature verification system is rife with fraud.

Meadows’ trip set in motion a series of meetings and conversations in a pressure campaign by Trump and his allies that culminated in a January 2nd phone call in which Trump told Georgia’s secretary of state to “find” the votes he needed to win. That call, joined by Meadows and others, is now the central focus of an Atlanta investigation into whether Trump and his allies criminally interfered in the 2020 election in an attempt to overturn his Georgia loss to Democrat Joe Biden, according to two people familiar with the matter.

Meadows’ trip also highlights the top aide’s prominent role in the events under investigation by Fulton County District Attorney Fani Willis. He was among the eight participants identified in the January 2nd call, according to a transcript, and he kicked off the call with introductions of everyone on it. Meadows later pressed Georgia officials on the call for access to legally private voter information, a request they denied, the transcript shows.

A person with direct knowledge of the district attorney’s investigation told Reuters the office is likely to issue subpoenas for evidence to most or all of the call participants.

The Atlanta probe is one of two known criminal inquiries into Trump, who also faces a host of other legal threats. The Manhattan District Attorney’s office is investigating Trump’s private business ventures for possible fraud. Reuters identified four other ongoing investigations involving Trump and at least 17 active lawsuits.

Since launching her inquiry in February, Willis has added several high-profile attorneys to her team, including John Floyd, a national authority on racketeering. Willis is exploring potential racketeering charges in connection with Trump’s campaign to pressure state officials, and Floyd will consult on that investigation as well as other racketeering cases.

Georgia Secretary of State Brad Raffensperger, a Republican, had launched the Cobb County review in the wake of allegations that the county had not properly audited signatures during the June primary elections. The examination followed two statewide recounts that confirmed Trump lost to Biden in Georgia by about 12,000 votes, a dramatic political shift in the traditionally Republican state. State officials found no evidence to back Trump’s fraud claims.

During Meadows’ December 22nd visit, Georgia Deputy Secretary of State Jordan Fuchs, a Republican, greeted him in the hallway of the Cobb County Civic Center in the city of Marietta. She prevented him from entering the room where the signature audits were conducted, the secretary of state’s office told Reuters.

Meadows also spoke with the secretary of state’s chief investigator, Frances Watson, who was conducting the audit of about 15,000 signatures along with the Georgia Bureau of Investigation. Meadows gathered contact information from both Watson and Fuchs, including their cell phone numbers.

Trump called Watson the next day, urging her to find the “dishonesty” that he claimed, without evidence, had cost him the election.

“When the right answer comes out, you’ll be praised,” Trump told Watson, according to audio of the call reviewed by Reuters and first reported by the Wall Street Journal.

After his Georgia visit, Meadows called Fuchs to request a call between Trump and the secretary of state, according to a person with direct knowledge of the matter. When Fuchs asked Meadows what Trump wanted to talk about, Meadows did not give clear direction, the source said.

Trump’s January 2nd call to Raffensperger was one of 18 calls the White House attempted to make to the secretary of state’s office after the November election, said a state official. Raffensperger had initially avoided the calls out of concern they posed a conflict of interest, his office said.

In the January 2nd call, Trump pressured Raffensperger to “find 11,780 votes,” the number Trump needed to win in Georgia.

“There’s nothing wrong with saying that, you know, that you’ve recalculated,” Trump said, according to a transcript of the call.

When Willis announced her investigation in February, Jason Miller, a representative for Trump said “there was nothing improper or untoward” about the January 2nd call. – Reuters