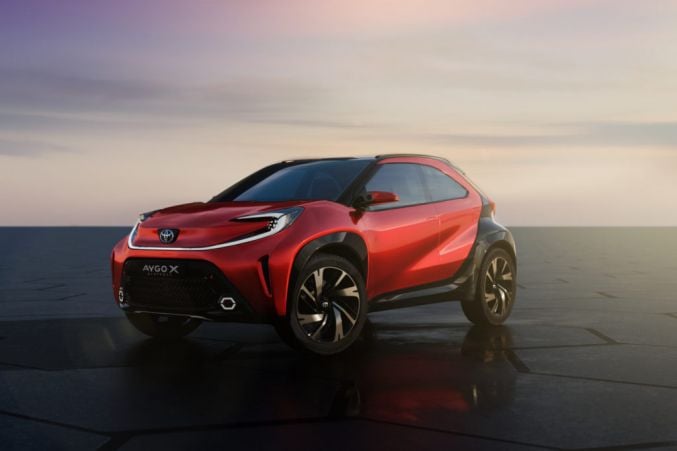 Toyota has shown off a concept version of a new Aygo, in which the tiny city car seems to have morphed into a chunky, more stylish, crossover

Toyota has shown off a concept version of a new Aygo, in which the tiny city car seems to have morphed into a chunky, more stylish, crossover.

The Japanese car giant recently confirmed it would make a third-generation of its small Aygo, and that the model would be sticking with petrol power – seemingly confirming concerns elsewhere in the industry that, right now, battery power is too expensive for the smallest, entry-level models.

Indeed, Toyota seems to have got around the issue of the Aygo’s smallness making it something of a low-profit exercise by simply making this new one larger, chunkier, and more crossover-y.

That will, presumably, allow Toyota to charge a little more for it, while still keeping the price down to a relatively affordable level where first-time drivers and downsizing older owners can afford it. Previously, Toyota has shared production of the Aygo with Peugeot (the 108) and Citroen (the C1) but that seems unlikely to continue now.

Toyota says that it is “committed to the future of the A-segment in Europe” and indeed that it wants to “revolutionise” that smallest car segment with this model.

There have been previous crossover-y A-segment cars – the Opel Adam Rocks, anyone? – but Toyota, and its European design studio, ED2 (pronounced ED-Squared), based in the south of France, does seem to be pushing the boundaries a little more by making this Aygo more aggressively tall and chunky, with an almost beach-buggy aesthetic.

“Everybody deserves a cool car. When I look at the Aygo X prologue, I’m really proud to say that ED2 Team created exactly that. I’m excited to see it revolutionising the segment” said Ian Cartabiano, president of the ED2 design studio.

The Aygo X Prologue is based on Toyota’s GA-B chassis, which you’ll also find under the new Yaris. The chassis has been shortened a little, to tuck the Aygo X’s dimensions in, but the X model will be taller and larger overall than the outgoing Aygo.

At the front are wraparound ‘clamp’ shaped headlights, with a connecting LED light bar between them, while at the rear there’s a similar light bar for the rear lamps.

As ever with an Aygo-badged car, if you’re going to fit a part, it has to be a multi-tasker, so that brake light bar also acts as the boot handle. Once again, as is Aygo tradition, the rear hatch is just a single, simple pane of glass, simplifying the design and saving weight.

Underneath that hatch, in the rear bumper, there’s an integrated mount for a bicycle rack, while the design team has also integrated a pair of ‘action cameras’ into the side mirror housings (useful for recording all the taxis that carve you up in city traffic, we guess…).

Toyota’s come over all a bit hipster when it comes to the Aygo X Prologue’s colour options, saying that the red, orange, green, and black paint finishes are based on “chilli, ginger, wasabi and black pepper.”

While Toyota hasn’t given us any technical details of the car as yet, it’s almost certain that it will use the same 1.0-litre three-cylinder petrol engine as the basic Yaris, with the possibility of both the larger 1.5-litre engine, and maybe even a range-topping hybrid version as well. The Aygo X will, when it goes on sale, sit beneath both the Yaris hatchback and the incoming Yaris Cross crossover in the Toyota lineup.

“When I was young, to draw cars and now the past 25 years I’ve had the pleasure to be able to do it as a job and get paid for it, which is kind of nice” said the Agyo X Prologue’s design director, Lance Scott.

“We wanted to give the car a very forward motion feeling, so combined with the big wheels and the lifted up stance of the car, that just give us very agile look, something that’s going to be independent outside the small roads in the city.

“That’s going to be fun to drive, and is going to give you a nice high visual point, when you’re driving in the city environment. We concentrated on giving the car a bit more of a cheeky look. Our ED2 studio is based in Europe and we very much want to promote the European style and the European dynamic within the cars that Toyota makes.”