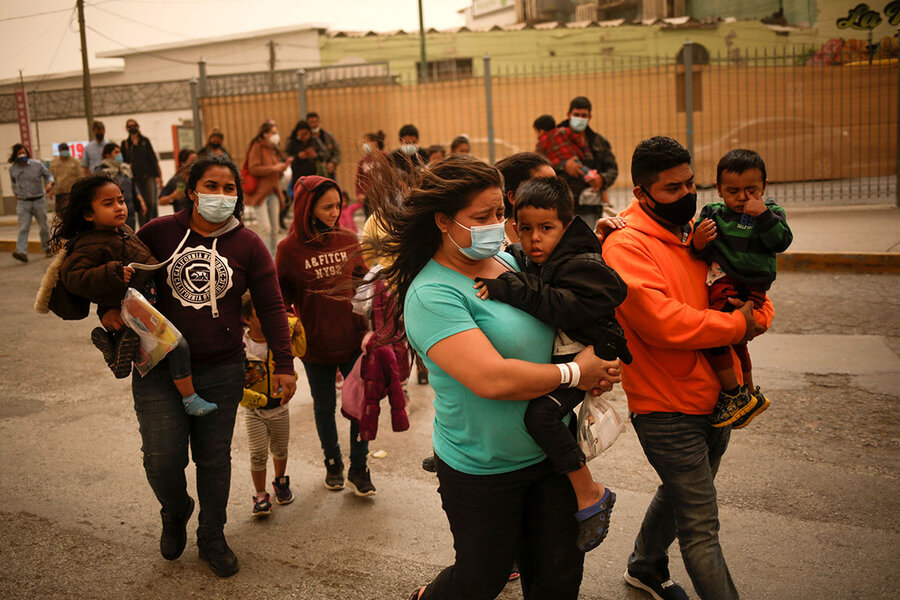 President Joe Biden is under increasing pressure to address a growing border crisis, as a surge in migrants tests his campaign promise for a comprehensive, humane approach to immigration. Amid criticism that his softer stance was to blame for the surge, Mr. Biden yesterday said plainly in an interview with ABC News, “Don’t come over.”

Last month, the United States detained nearly 100,000 migrants trying to cross into the country illegally – almost triple the total in February 2020, and more than in any other February since 2006. Among those were 9,300 unaccompanied minors. As the administration struggles to process them in a timely way during a pandemic, many have been kept in detention facilities beyond the legal limit of 72 hours, prompting conservatives to ask why Democrats are not again decrying “kids in cages” as they did during the Trump era.

Mexican officials have said that organized crime groups are taking advantage of President Biden’s more tolerant stance on immigration, developing “‘unprecedented’ levels of sophistication” to smuggle migrants into the U.S. and increasingly taking them on more dangerous routes. Some minors fall prey to child sex trafficking schemes. Drug trafficking also appears to be on the rise, with nearly twice as many pounds of drugs seized in February as the previous month. Not even halfway into this fiscal year, U.S. border authorities have already seized more fentanyl – a main driver of America’s opioid crisis – than in any of the three previous fiscal years.

Democrats criticized Donald Trump’s immigration approach as needlessly harsh. Now, amid a surge in asylum-seekers, the Biden administration is scrambling to come up with a practical alternative.

Rep. Maria Salazar, a Miami Republican who visited the border with a GOP congressional delegation on March 15, called on her community to pressure their representatives to act. “We – the Hispanic Americans in this country – have a problem, and we need to be part of the solution. We need to join forces and send a message that we cannot allow what’s happening on the border,” she said, speaking from El Paso, Texas. “We need to stop being pawns of the politicians in Washington and pawns of the traffickers who are trafficking with our children, our families, and our women.”

Many Democrats agree that the situation is unsustainable, but say the challenge requires a multifaceted response. Rep. Veronica Escobar, a Democrat who represents El Paso in Congress, said she sent a letter last week to Minority Leader Kevin McCarthy of California, offering to help connect the GOP delegation with migrants and advocates in addition to their meetings with Border Patrol, but never got a response.

“They want photo ops, and they use communities like mine as a prop,” says Representative Escobar, who says she can see a statue in Ciudad Juárez from her home in El Paso, and who feels the border is amply secure. “Here’s what makes us insecure: when we treat every human being arriving at our front door like they are a national security threat or a criminal. It takes law enforcement’s eyes off of the real security threats.”

A McCarthy spokesperson responded by saying that given the high numbers of migrants attempting to cross the border, including several individuals on the terrorist watchlist, and the threat of detained migrants spreading COVID-19 within the United States, the immediate priority must be to secure the border. “This is why Leader McCarthy led a congressional delegation down to the border this week – he wanted to assess the situation firsthand, including having discussions with migrants held at the facility, to gather the information needed to stop this crisis,” the spokesperson said. “He is ready to work with the president, or any Democrat, who wants to prioritize the security of our country.”

Democrats and Republicans have been trying for decades to develop an immigration policy that combines compassion and security – which both sides say are not contradictory ideals, though it often appears that way in political discourse. How to welcome those with bona fide asylum claims while upholding the laws of the land and preserving border security is a monumental challenge, one that former President Donald Trump tackled with aggressive measures that significantly reduced the number of migrants attempting to cross into the U.S. but also stirred controversy. In particular, he was criticized for his policy of separating children from their parents upon arrival, hundreds of whom still have not been reunited.

President Biden, who immediately halted or reversed some of those measures upon taking office, says it will take time for his administration to unwind the snarls of Mr. Trump’s approach. He has exempted minors from Title 42, a policy that immediately expels migrants due to the pandemic. And he has called for a review of the Migrant Protection Protocols (MPP), a Trump initiative that requires migrants who are denied entry to the U.S. (including asylum-seekers) to wait in Mexico until they can appear in a U.S. court. Mr. Biden also abruptly stopped congressionally funded work on nearly completed sections of the border wall, leaving gaps wide enough to drive vehicles through, and ended the so-called safe third-country agreements (STCAs) with Guatemala, Honduras, and El Salvador, which were designed to require asylum-seekers to first seek asylum in those Northern Triangle countries before applying to the U.S. Only the Guatemala agreement was implemented, and it has been suspended since the start of the pandemic.

“The bottom line is – and this is something about which we all agree – the immigration system is broken, and it is in need of legislative reform,” Mr. Biden’s homeland security chief, Alejandro Mayorkas, said in a March 17 hearing before the House Homeland Security Committee. “The president presented a bill, and there are bills pending before the House,” he added. “I am confident and optimistic that we will actually begin once and for all to fix this system.”

Though the current level of apprehensions is still below a summer 2019 peak, Mr. Mayorkas said in a statement that the U.S. is “on pace to encounter more individuals on the southwest border than we have in the last 20 years.” And while most adults are immediately deported, minors are not. The number of unaccompanied minors who were detained along the border increased by 63% from January to February of this year.

As these minors crowd into makeshift detention centers, awaiting transfer to the custody of the Department of Health and Human Services for placement with a sponsor, Mr. Biden and his Democratic allies have come under increasing pressure to demonstrate that they have a better solution to the same problem for which they lambasted Mr. Trump.

“These are the kids in cages who many of our Democratic colleagues were so outraged about a few years ago,” said Republican Sen. Chuck Grassley of Iowa on the Senate floor. “Curiously, we’re not seeing nearly as much outrage now.”

The prospects for comprehensive immigration reform in Congress – always difficult – appear particularly bleak now, with Democrats holding only a narrow margin in the House and a single tiebreaking vote in the Senate.

“The asylum claims are going through the roof. You’ve got to turn that off,” Sen. Lindsey Graham of South Carolina told reporters on Capitol Hill this week, as the House prepared legislation that would offer a path to citizenship for children previously brought here illegally, known as “Dreamers,” and another bill that would give agricultural workers an opportunity to apply for legal status. “You’re not going to get a bill on legalizing immigrants until you stop the flow.” Otherwise, he said, such a bill would act as an incentive for more to come.

Sen. Bob Menendez, a New Jersey Democrat and co-sponsor of a bill that would provide a path to citizenship for America’s 11 million unauthorized immigrants – a proposal Senator Graham called a “nonstarter” unless twinned with border security provisions – told reporters that there’s a constant effort to build a bipartisan coalition on the issue. But he added that Democrats are also looking at using the budget reconciliation process to fast-track some if not all of their immigration initiatives, which would bypass the need for getting 60 votes.

Most Democrats advocate for greater compassion for those fleeing poverty, gang violence, and corruption, which are rampant in the three Northern Triangle countries that have accounted for much of the illegal immigration to the U.S. in recent years. Former President Trump cut U.S. aid to these countries, which Democrats say exacerbated the problem, and also stopped a family reunification program that allowed minors to apply from their home country to join a parent in the U.S.

Republicans, for their part, tend to focus on the need to enforce U.S. law, for reasons of both ethics and safety. Allowing migrants to cross into and remain in the U.S. illegally simply incentivizes others to follow suit and undermines U.S. security, they say.

“If you let them in, more will come,” says Sen. Tom Cotton, an Arkansas Republican, calling the current situation on the border “a catastrophe.”

Many Republicans also push back on the criticism that they have no heart when it comes to foreigners seeking to flee desperate circumstances in their home countries. “It’s not compassionate to allow the illegal immigrants to cut in front of the line of millions of people around the world who are attempting to do it the right way – millions of people around the world that have valid asylum claims, that are being persecuted for their religion, for their gender, for their political beliefs, for their speech,” says Rep. Dan Crenshaw, a Texas Republican.

In a February executive order, President Biden laid out his own vision for achieving both compassion and security.

“Securing our borders does not require us to ignore the humanity of those who seek to cross them. The opposite is true,” he said. “We cannot solve the humanitarian crisis at our border without addressing the violence, instability, and lack of opportunity that compel so many people to flee their homes.”

Representative Escobar, the El Paso Democrat, says that will require working with leaders in the Northern Triangle, rebuilding the Obama-era program by which minors in those countries can apply for family reunification, and creating an orderly, humane process on the U.S. side.

“I believe that the Biden administration is going to be successful on all those fronts,” she says.