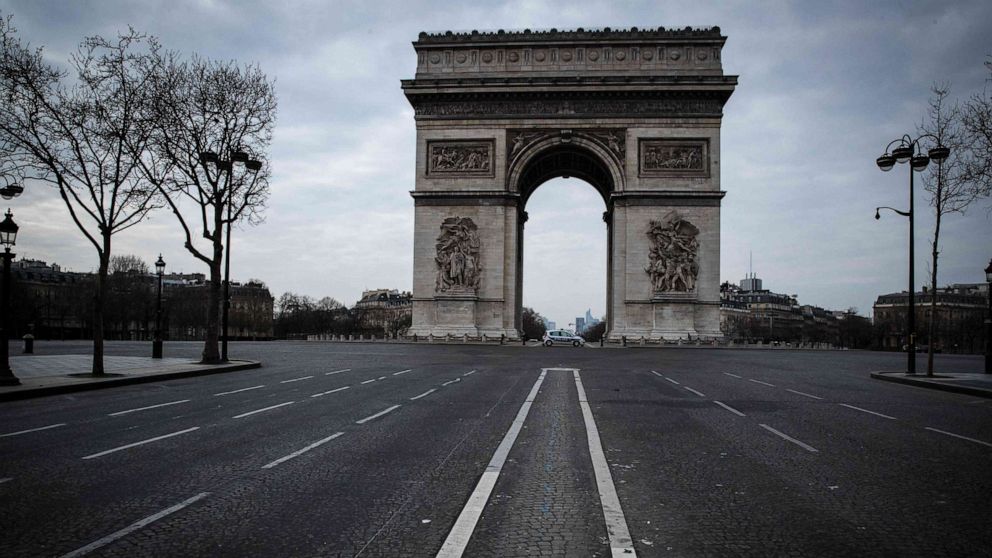 LONDON, PARIS and MOSCOW — Earlier this month, the World Health Organization reported that an estimated 641 million women had faced physical or sexual violence by an intimate partner over the course of their lifetime. Another 95 million were subjected to sexual violence from a non-partner, meaning that 1 in 3 women face such treatment at least once in their lives.

While the data, collected between 2000 and 2018, is shocking, the scale of the problem amid the coronavirus pandemic may be even larger, women’s organizations in Europe and the UN told ABC News.

That’s because over the past year, women around the world have had to stay at home with their potential abusers, unable to seek help in some cases, in what the U.N. has described as a “shadow pandemic” of domestic violence.

Data is still incomplete, but advocates in several countries have reported dramatic increases in requests for domestic abuse services. In the U.S., the National Commission on COVID-19 and Criminal Justice reported an 8.1% increase in incidents after lockdown orders.

And advocates and others have developed creative ways to empower women to report abusers and seek help amid the trying circumstances of the pandemic.

At one point in April last year, an Agence France-Presse database suggested that over 3.9 billion people, around half of the global population, had been asked to stay at home to combat the spread of COVID-19 either through mandatory lockdowns or voluntary restrictions.

While global infection rates reduced towards the end of summer, the coronavirus “second wave” saw a number of countries, particularly in Europe, re-enter lockdowns to halt the spread.

According to Anita Bhatia, the deputy executive director of UN Women, those circumstances have played a role in increasing the rates of domestic abuse globally.

“What the pandemic simply did was to create conditions for abuse that are ideal for abusers because it forced people into lockdown,” she told ABC News in a recent interview. “It provided institutional cover for people not being able to leave the house. And so it just was, if you will, the perfect set of circumstances for a perpetrator of abuse.”

With reports emerging last April of increasing rates of violence against women around the world, the UN called the situation a “shadow pandemic.” Yet by September, only 1 in 8 countries had measures in place to protect women from the economic and social impacts of the pandemic, they said, including to tackle violence against women and girls.

Experts on domestic abuse say that the stay-at-home orders ushered in by the pandemic have exacerbated the problem. By having movement so heavily restricted, abusers have had more opportunities to exert control, and the economic crisis has placed an even greater strain on abusive relationships, they say.

A preliminary overview from the EU on the issue of intimate partner violence during the pandemic published this month said that the full scale of the problem is not yet calculable, but “no government can deny the gravity and urgency of the situation in the light of the wave of violence we saw in 2020.”

Two women in England and Wales are killed each week by a current or former partner, according to Refuge, the police receive a call about domestic abuse related call every 30 seconds. Those stats, Lisa King, Refuge’s Director of Communications, told ABC News, are “horrific.” She described the national lockdowns seen at various points across the U.K. as a “bit of a perpetrator’s playground.”

“Women are controlled financially, sexually, psychologically and increasingly technologically as well,” she told ABC News. “A huge, huge issue that has definitely been compounded by the pandemic. We would not say that COVID had caused domestic abuse, but it’s certainly exacerbated pre-existing behaviors. And those who certainly experienced domestic abuse will most likely have experienced it more frequently and more severely.”

In France, the National Federation of Women’s Solidarity, which manages a major domestic abuse hotline, saw their shelters completely fill up during the first lockdown. They were forced to open more shelters for women seeking to escape abuse as callouts escalated. After the first lockdown, there were many cases of women and their children experiencing post-traumatic stress disorder, Françoise Brié, the organization’s director, told ABC News.

“When you are just like in jail with your perpetrator, it’s more difficult for you to find help,” Brié said. “It’s more easy for the perpetrator to control your activity.”

During the second national lockdown in France, which was less severe, women were “able to go to work, their children are going to school, so it was less difficult for them to reach the calling centers, or the shelters,” she said.

Economic loss and unemployment have exacerbated the issue, Joanna Gzyra, director of communications at the Center for Women’s Rights in Warsaw (CWR) told ABC News.

“Most abusers are good manipulators, so they are often pleading for forgiveness and promising to do better in the future,” she told ABC News, noting that a problem like job loss is an issue even in the best of times. “It causes tension even in most stable relations. In an abusive relationship, such a problem is a pretext, for an illegitimate behavior. The victim often justifies the abuser, because he is really stressed but would never do it otherwise.”

The novelty of the extent of the domestic abuse crisis has led people to develop creative ways to report suspected abuse.

In Poland, Krystyna Paszko, a high school student, won a prize this year from the European Union for setting up a fake cosmetic website which allows women to report domestic abuse in a discreet way. When the user places a skin care item into their online basket, a series of coded questions are prompted from psychologists specializing in crisis intervention. They ask, for instance, how long the problem has been going on for, whether it is impacted by alcohol, if the problem also affects your children. Lawyers are also involved, and based on the responses, the authorities will be called to check in.

“I thought I would help one person, maybe two,” she told ABC News. “I am also shocked there was a need for me to create [the website] and that it wasn’t a government initiative, and that so many people need it… it was because of the increase in domestic violence cases due to the COVID-19 pandemic, because of that I decided to face this problem and try to help these people.”

Paszko was inspired after reading reports in France of inventive ways of reporting domestic violence. This month, the French feminist campaign #NousToutes (equivalent of #MeToo in France) will distribute 615,000 bread bags to bakeries around the country. The bags are plastered with information on hotlines to call, as well as educational messages to help identify what domestic abuse actually is. Their reasoning is that the country’s bakeries are some of the most accessible places for vulnerable women, even for the isolated amongst them, in France go out to get bread – and they hope the initiative will raise awareness.

And in the U.K. the government has supported the “Ask for Ani” campaign, a domestic abuse codeword that will signal to pharmacies that you are a victim.

“There’s a lot of creativity unleashed in times of crisis,” Bhatia said. “And we need to see as many creative initiatives as possible because the standard ways of reporting just don’t cut it.”

Similarly, more governments have addressed the issue in coronavirus daily briefings, something unheard of in the past.

“I think that’s been a real turning point, in the kind of that that the public and women’s understanding of what domestic abuse is,” King said. “You can only do something about a problem if you know what it is and you’re experiencing it. So that’s helped. And then government, too, has not been able to turn a blind eye to the problem.”

Forced to stay at home, more women have come to recognize the relationships they are in as abusive, according to Brié.

“We also noticed that some women said that they understood at the beginning of the pandemic that they were victims of violence, because they were confronted to the perpetrator every day,” she said. “They didn’t speak about it before.”

Despite this awareness and creative new ways to report violence under trying conditions, there seem to be troubling signs that the reported increase in violence may outlast lockdowns.

“I wish I could say that those countries which have opened up actually have seen declines in violence,” Bhatia said. “We are tracking the data… We see that the levels of violence against women remain fairly consistent. They go up in lockdown, but conversely, they do not necessarily go down when countries open up.”