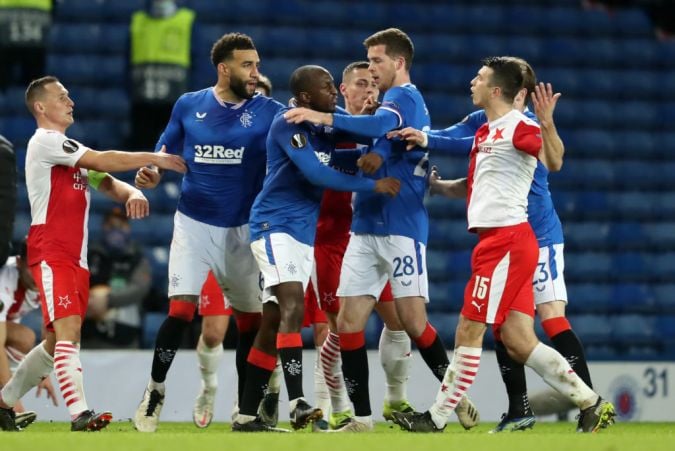 Slavia Prague have asked police to investigate allegations that a Rangers player carried out an assault in the Ibrox tunnel – and claim Gers boss Steven Gerrard is a key witness.

The fresh allegations come with Light Blues chiefs having earlier hit back at what they claim are deflection tactics aimed at masking the racism storm which erupted following Thursday’s Europa League clash.

Midfielder Glen Kamara had to be held back by team-mates as he reacted with fury when Czech defender Ondrej Kudela wandered alongside him late in the game, cupping his hand before whispering an alleged discriminatory slur into the midfielder’s ear – something Kudela denies.

The match, which was won 2-0 by Slavia after Gers had two men sent off, was played to a finish as the Light Blues opted against walking off in protest.

Gerrard and Rangers chairman Douglas Park, however, were later seen confronting the Slavia delegation after the full-time whistle as they raged against the treatment of Finland international Kamara.

Now Slavia are claiming Kamara landed a punch on Kudela as the altercation spilled over into the tunnel.

UEFA has already announced it will be investigating the game – but Slavia are also demanding that police officers probe events.

In a statement, the Czechs – who now will face Arsenal in the Europa League last eight – said: “Slavia Prague filed a criminal complaint with the Scottish Police through the Embassy of the Czech Republic in Great Britain for physically assaulting player Ondrej Kudela.

Rangers have opted not to respond to the latest development but managing director Stewart Robertson earlier released a statement insisting the newly crowned Scottish champions will object to any attempt to “deflect” away from the alleged racial abuse aimed at Kamara.

Steven Gerrard has arrived to speak to the media.

🎙️ SG: I spoke to Glen last night and will speak to him again after this press conference. It is important for me to listen to Glen and find out how he is feeling.

Gerrard has already warned UEFA it must not allow the claims to be “brushed under the carpet”.

And Robertson has also turned up the heat on European football’s governing body as he insisted “enough is enough”.

He said in a statement: “The racist abuse suffered by Glen Kamara will not be tolerated by Rangers. As a club, we stand resolutely behind Glen as we support him and his team-mates.

“Several of our players have subsequently received racist, threatening and sickening abuse online. This is abhorrent and once again highlights the responsibility social media outlets have in eradicating abuse from faceless cowards.

"This situation is over to Uefa now. I just hope it doesn’t get brushed under the carpet" pic.twitter.com/l6GT93zIvW

“We refuse to acknowledge any attempt to defend, deflect or deny the abuse Glen Kamara experienced last night.

“This incident has been reported to the UEFA match delegate and we understand that it has formed part of his match report.

“UEFA will be well aware the football world is watching. We expect a robust and unequivocal response in relation to this incident. It cannot be merely ‘swept under the carpet’- we are not prepared for Glen Kamara to be yet another statistic. Enough is enough.”

UEFA initially said it was “aware of an incident which occurred in the tunnel after the end of the match” before later confirming it had now launched an investigation.

A UEFA statement read: “In accordance with the Article 31(4) of the UEFA Disciplinary Regulations, an Ethics and Disciplinary Inspector will conduct an investigation regarding the incidents that occurred during the 2020-21 UEFA Europa League round of 16 second leg match between Rangers and Slavia Praha on March 18 2021.”

Club statement: We denounce any form of racism. Any form of racial discrimination is contrary to our values and principles and we shall never tolerate such conduct.

Slavia were quick to deny the allegations, issuing a late night statement which said Kudela had only called Kamara a “f****** guy”.

But they launched into a stinging criticism of Rangers and their “unprecedentedly malicious play” and “brutal tackles”.

Ondrej Kolar was left with a fractured skull and 10 stitches after Rangers striker Kemar Roofe planted his studs into the Slavia keeper’s face in a high challenge, while Leon Balogun was also dismissed after collecting two bookings.

“Ondrej Kudela is one of the team captains elected in secret polls by the players who choose characters that enjoy their trust,” it said. “He is a football gentleman and categorically denies and refutes any allegations of racism.

“We are shocked that his reputation and the club’s reputation are being smeared without a single piece of evidence. The only ‘alleged’ evidence is the player covering his mouth – which Ondrej does on a regular basis when he talks to his team-mates during our games.

“Under the patronage and in the presence of the UEFA delegation, the coaches of both teams, Ondrej Kudela and Glen Kamara met. After the arrival of Slavia representatives, Ondrej was physically abused by the player of Rangers who then fled into the locker rooms followed by the manager Steven Gerrard without a single word of apology.

“We have felt a great respect to Rangers for their recent football performance and glorious history. However, we wish for a UEFA investigation into all incidents related to the recent match and will fully co-operate.”

Police Scotland told the PA news agency on Friday evening that they have not heard anything from either club yet.

The force said on Friday morning: “No reports of criminality have been made by either club in connection with last night’s match. Police Scotland has contacted club officials and assured them that should any allegation be received it will be investigated thoroughly.”