Hello, dear visitors of the site “Visiting Samodelkin”!
Today I want to introduce you to my next unpretentious homemade product. This is a “carrying” lamp made in the form of a torch. 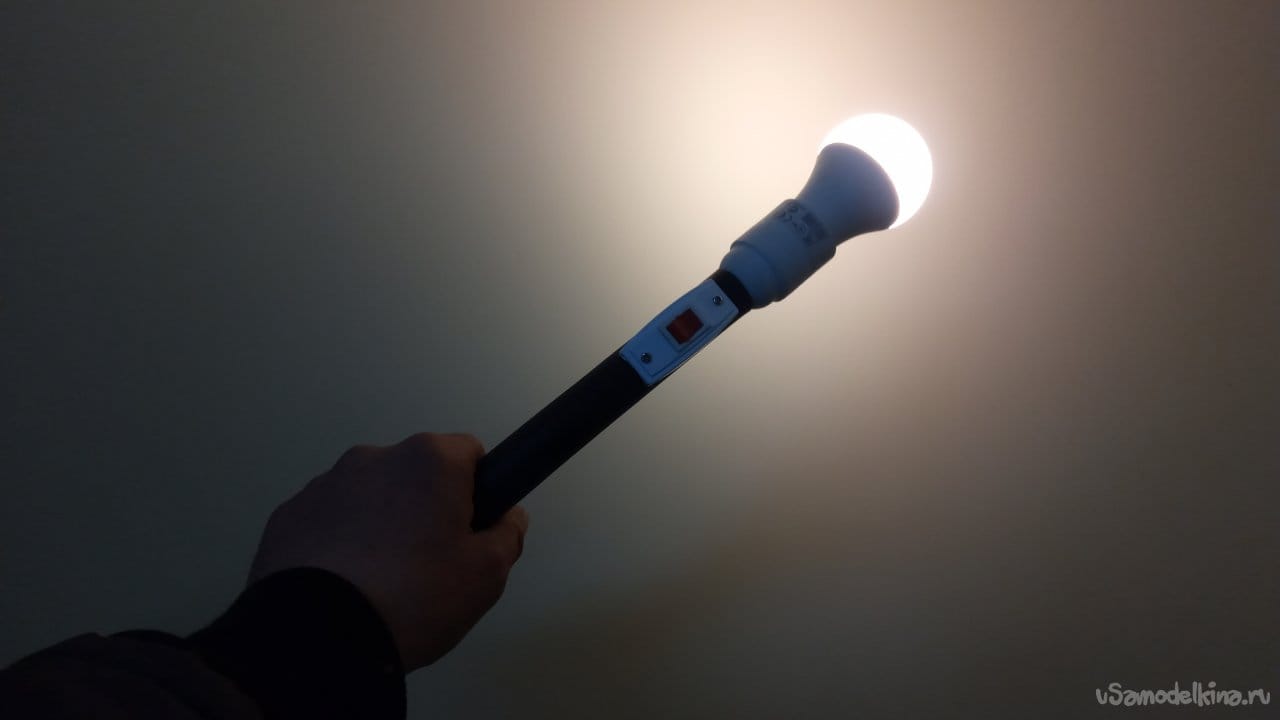 What prompted me to create it? .. The fact is that I am now leveling and filling the walls in my lady. I decided to bring the walls out for painting. This, of course, is much more time consuming, but …. for some reason they decided that way. (By the way, I heard the opinion that they do this to save on wallpaper.))) In fact, even if you do not pay for the work, but do it yourself, the materials will pull as much, or even more, as expensive wallpapers cost. And if you hire finishers, it will become many times more expensive! )
So, after several layers of ordinary putty, several more layers of a more finely dispersed finish are applied. And after that, the plane of the wall is sanded with sandpaper in several steps, with a decrease in the grit size of the sandpaper. After all, it is necessary to ensure that the level difference on the wall is minimal! You can easily check this by attaching a long and right to the wall.lo, and placing a light source behind it .. An acceptable level of alignment is such that the gaps between the rights and scrap and wall do not exceed a millimeter in thickness, provided that their length is not less than a meter! But this is not enough! The fact is that there are scratches on the wall from coarse sandpaper and subtle defects formed during the application of the finishing putty. While the wall is white, you can't see it But the paint will necessarily “show” (And will not hide, as many think))). In order to eliminate them, the finished wall plane is cleaned with finer emery paper (No. 240 and higher). And in order to clearly see all small defects on a white wall, craftsmen usually use a carrying lamp. If you rest the lamp with the bulb against the wall, in the immediate vicinity of it everything will be very clearly visible, even the smallest irregularities – a bright light, “sliding along the wall”, highlights them very well.
And so, having reached this stage, I also took the E-27 cartridge, attached a long cable with a plug to it, wrapped the lamp and started working … And I realized that the right decision would be to spend an hour or two making a more convenient light source , because working with an ordinary light bulb is not convenient for several reasons :
1. You need to hold it directly by the cartridge, which is inconvenient.
2. It has nowhere to put it until it is needed (when I saw an unevenness and for some time I eliminate it, working with sandpaper, I have to hold the lamp in another one. That is, my hand is busy all the time). Even standing on the floor, there are certain inconveniences, and what can we say, if you work on a “goat”.
3. It is impossible to quickly turn it on and off. And, even if you even managed to fix it somewhere nearby, until you need it, it, like evil, lies just so that it blinds your eyes and interferes!))))
Having spent an hour, I made a lamp, devoid of these disadvantages. I did it from what I found “here and now”, so, perhaps, some solutions will seem a little strange choice to you …)))).
Here's what I used:
1. Cartridge E-27.
2. ShVVP cord 2×0.5
3. Fork.
4. Switch for installation on the cord.
5. Cutting HDPE pipes with a diameter of 20 and 25 mm.
6. Hairpin М10.
7. M10 cap nut.
8. An old knitting needle.
I started by trying to make some kind of handle for a lamp holder. I noticed that there is an M10 thread at the end of the cartridge. 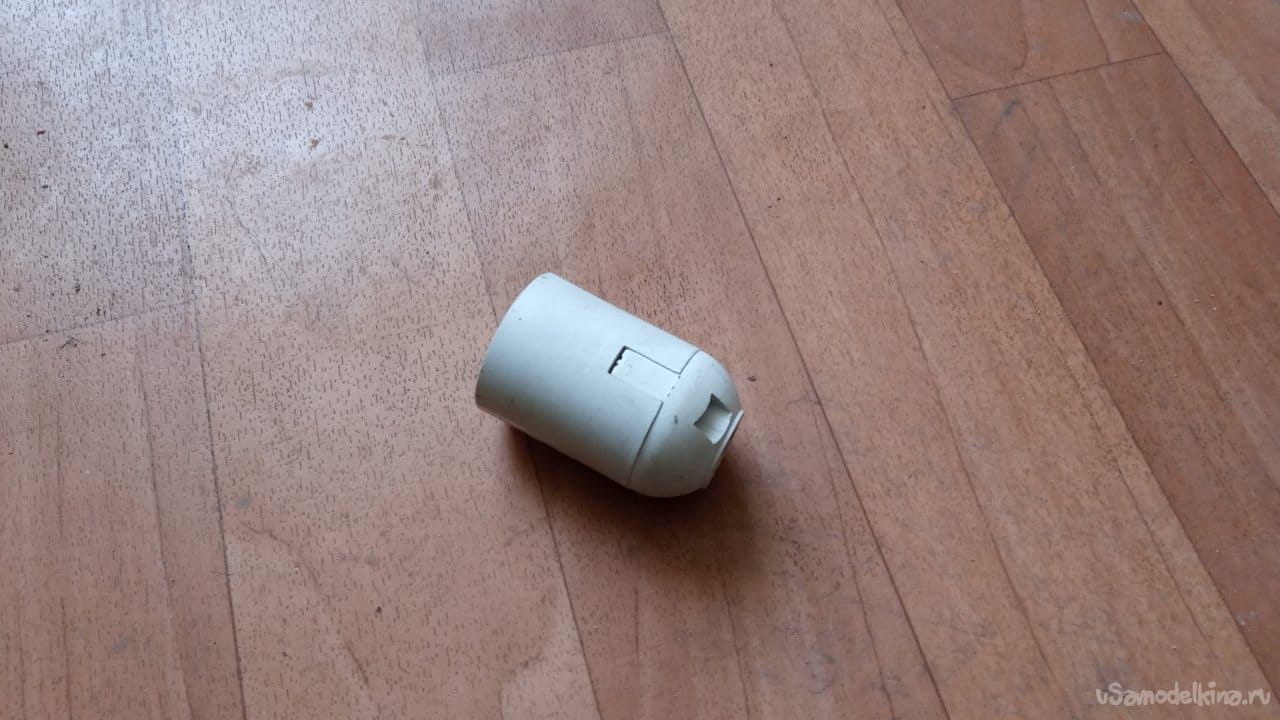 At first I thought to find some kind of long enough bolt, put it on its tube (again, some kind)))), wrap it in a cartridge and so get a handle. But the bolt was not of the correct length. But I always have threaded rods in stock! And I had the idea to make the handle longer. I cut off a piece of hairpin, wrapped it in a cartridge. I wrapped it with electrical tape (there was no blue, sorry))). 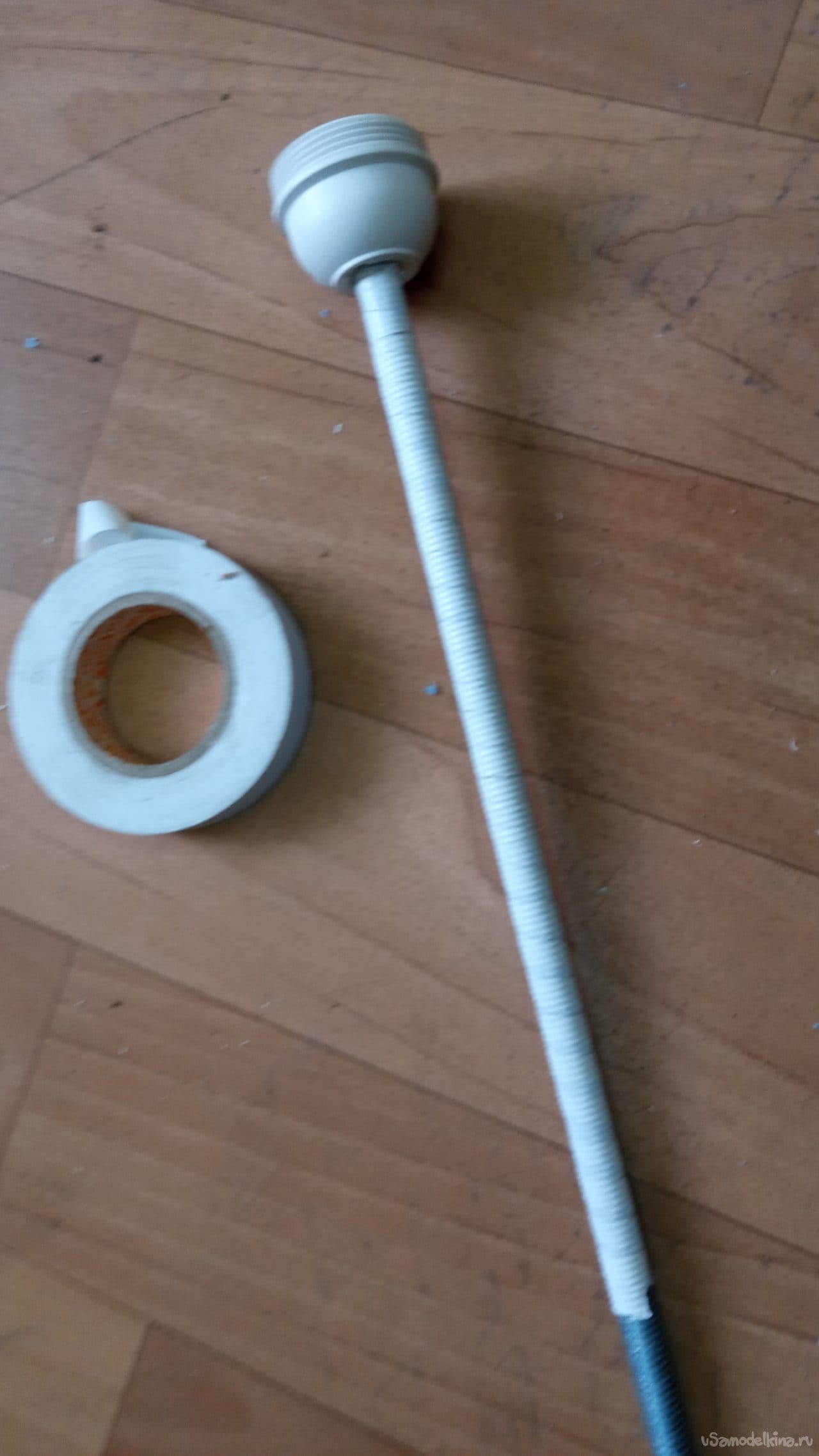 But now it will not be possible to remove the wires from the cartridge – the hole is plugged with a hairpin. I quickly solved the problem by drilling two holes in the plastic, through which the wires of the cut ball screw 2×0.5 cord would pass 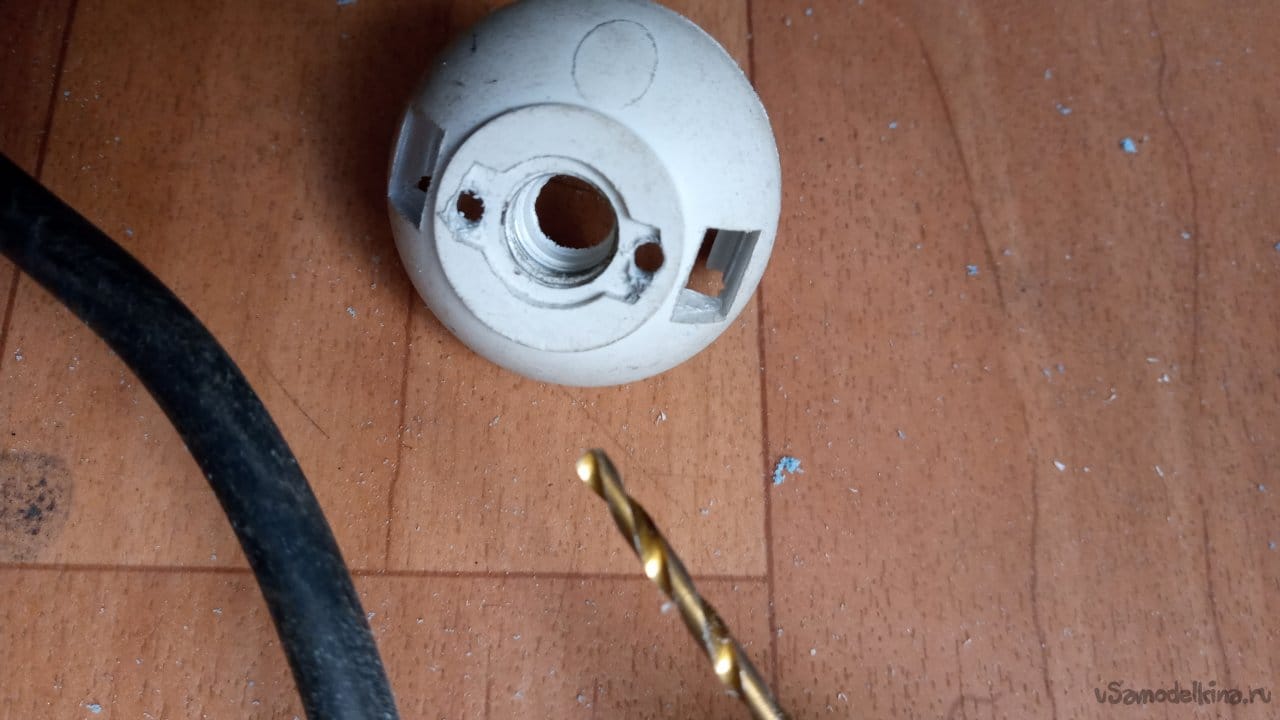 Now you need to somehow “cultivate” the handle. I decided to put on a hairpin a piece of HDPE water pipe. There were cuttings of pipes with a diameter of 20 and 25 mm: 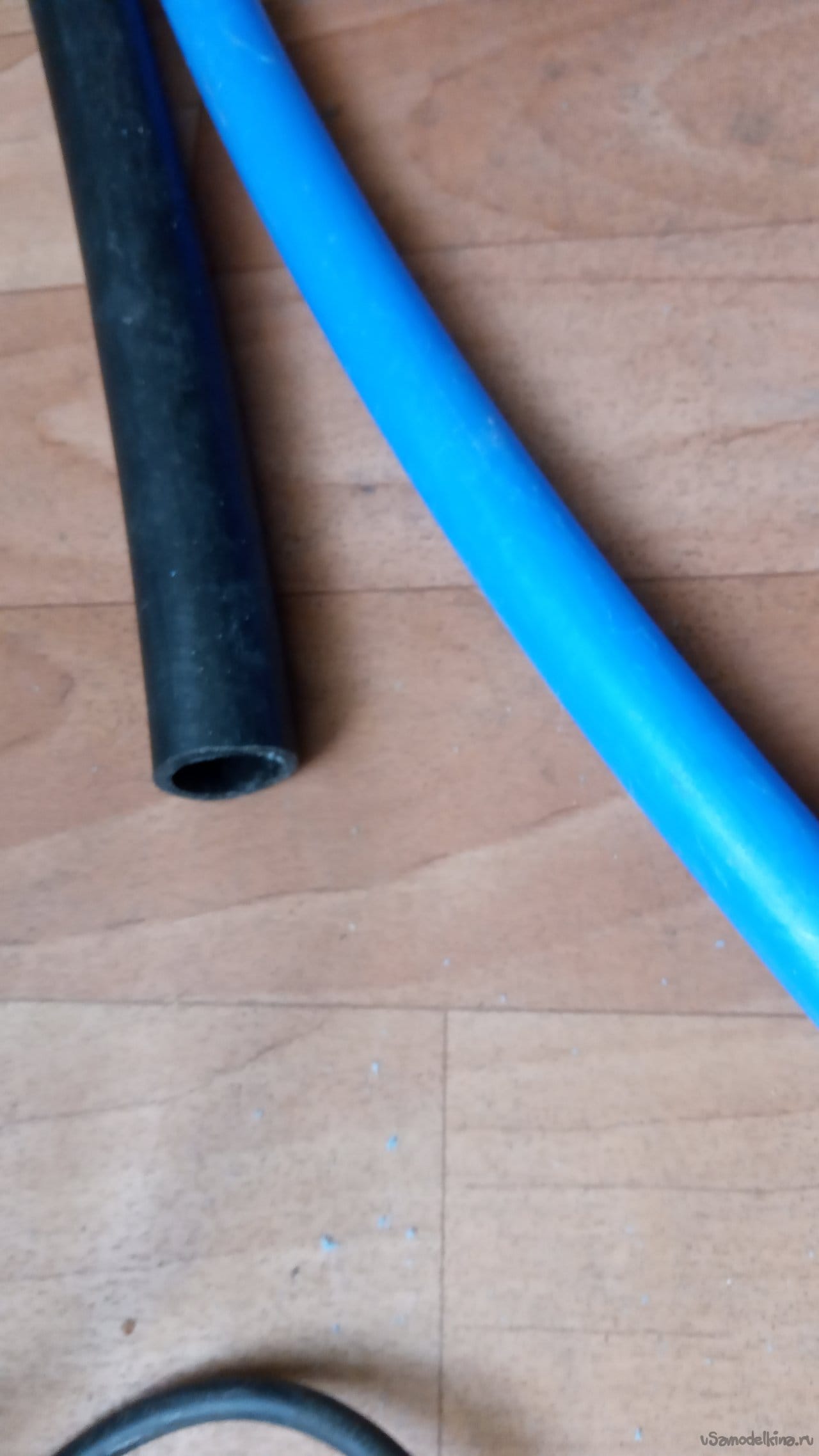 I chose the twenty-fifth, as it is more comfortable to hold in the hand. But it turned out that it turns out to be painfully crooked – the HDPE pipe is not rigid, and, since its inner diameter significantly exceeds the outer diameter of the stud, when tightening the nut at the other end, it bends strongly. It is necessary to somehow reduce the difference in diameters. There were thoughts of winding cardboard, but my gaze rested on a piece of the twentieth pipe. It does not enter inside, but if you cut a strip out of it, then the problem will be solved. What I did with the grinder:
Now she goes inside: 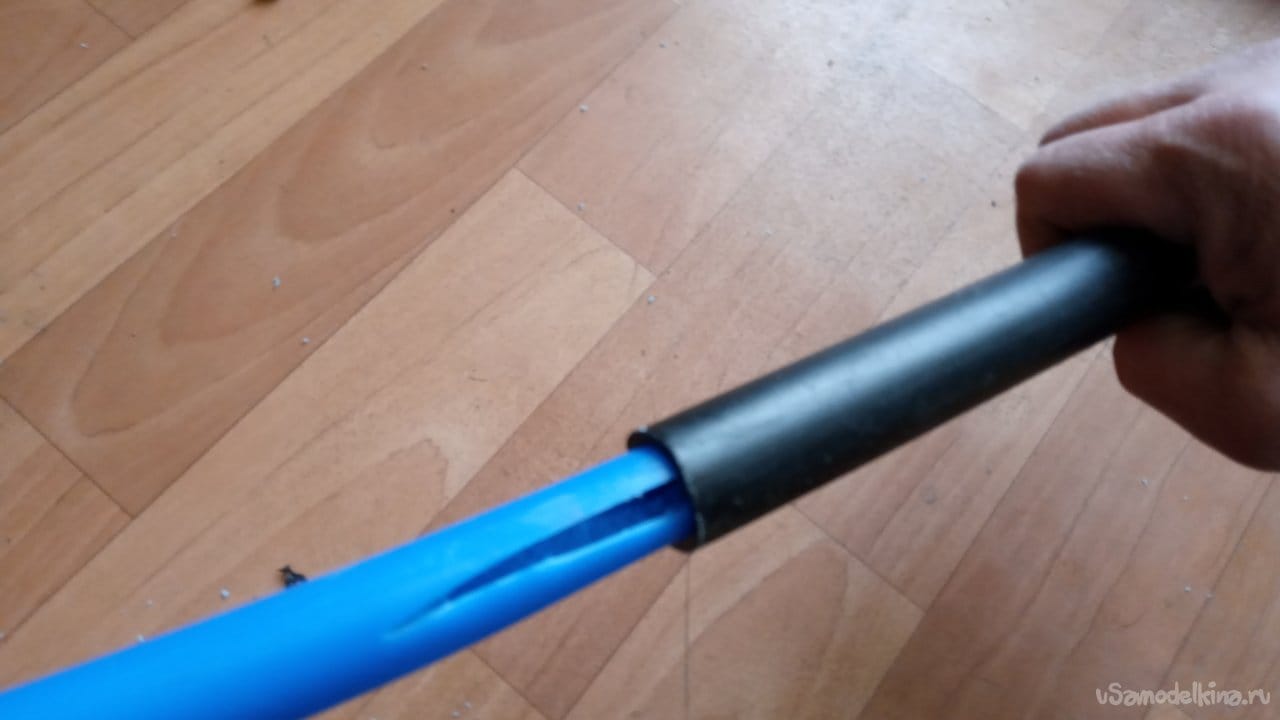 Now we need to solve problem number two – to make some kind of hook, so that you can quickly and easily, hang the lamp on the belt with one left hand until it is needed. Having rummaged through the “necessary scrap metal, I found an old knitting needle: 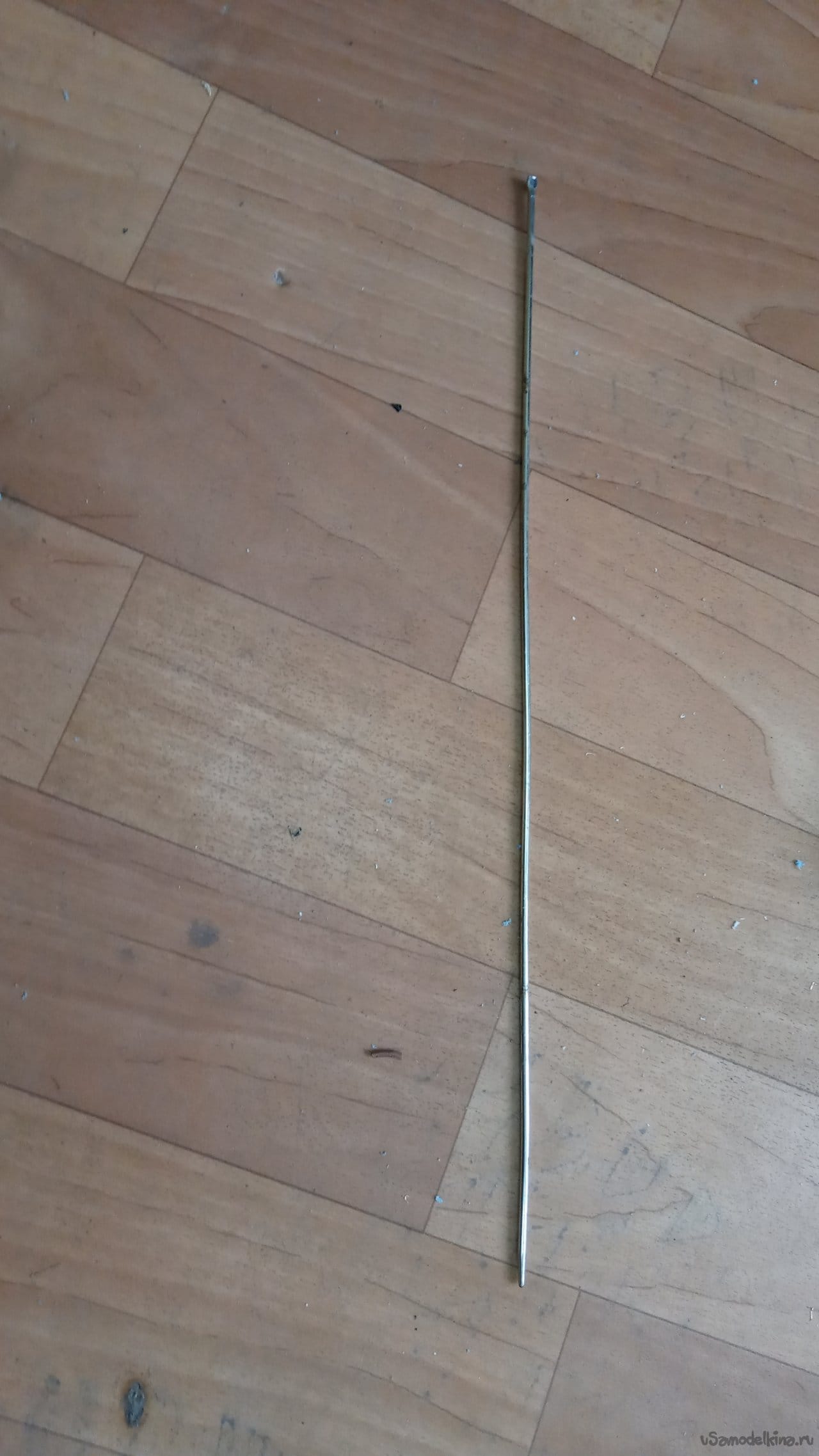 Using pliers, I bent the following bracket out of it: 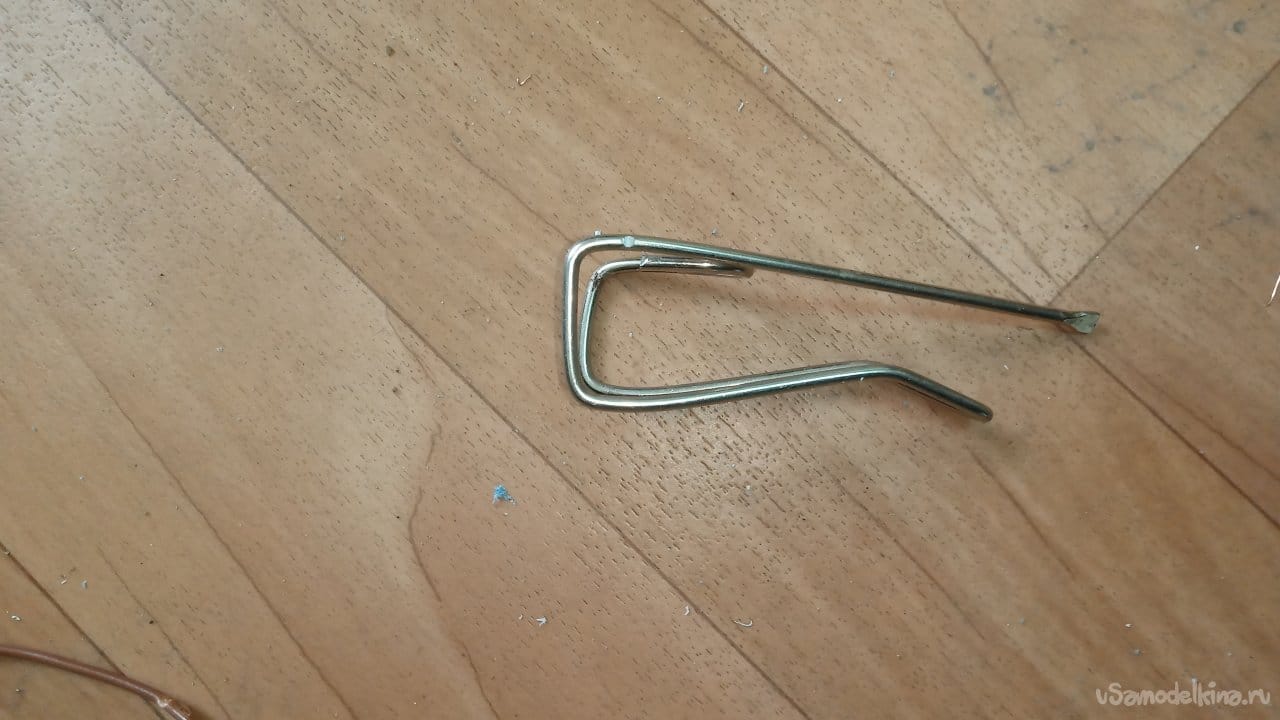 inserted it into the end of the pipe and pressed it with an M10 cap nut through an enlarged washer. 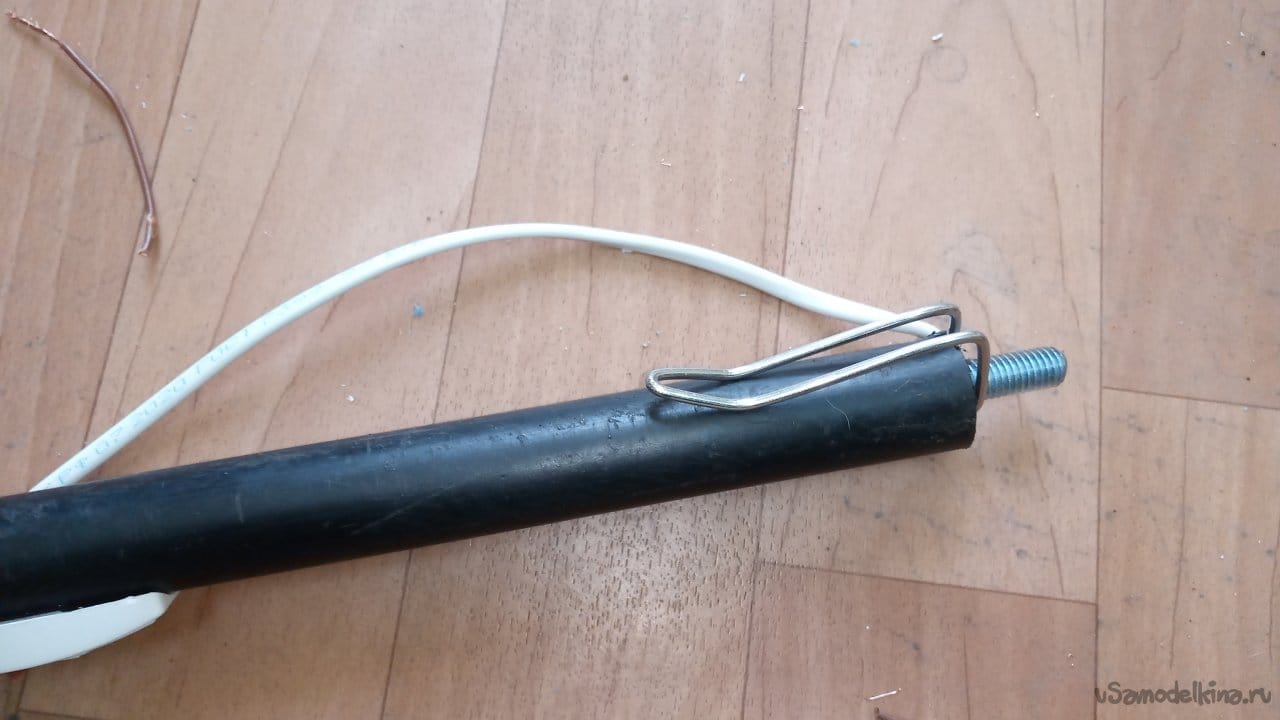 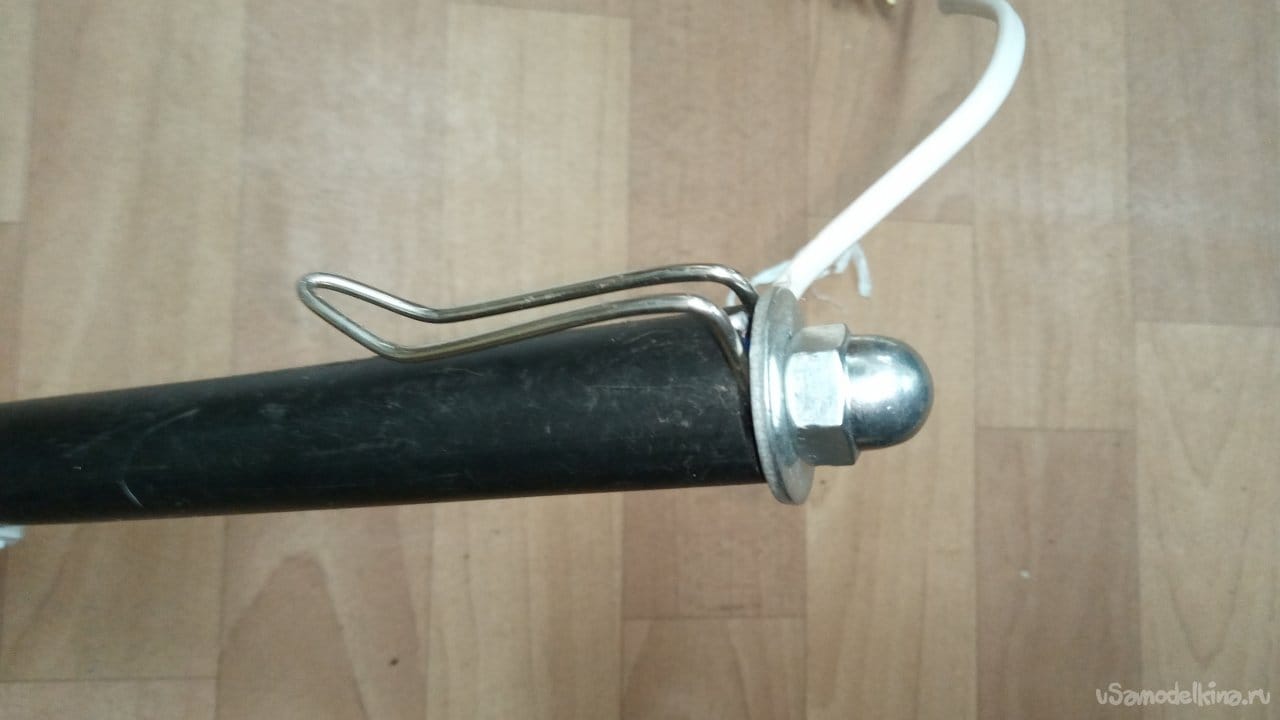 The lamp is ready. It remains to solve the third problem – the switch. I always have wires, sockets, plugs, and switches in stock. I decided to use the following switch for the sconce, which is hung in the cord break: 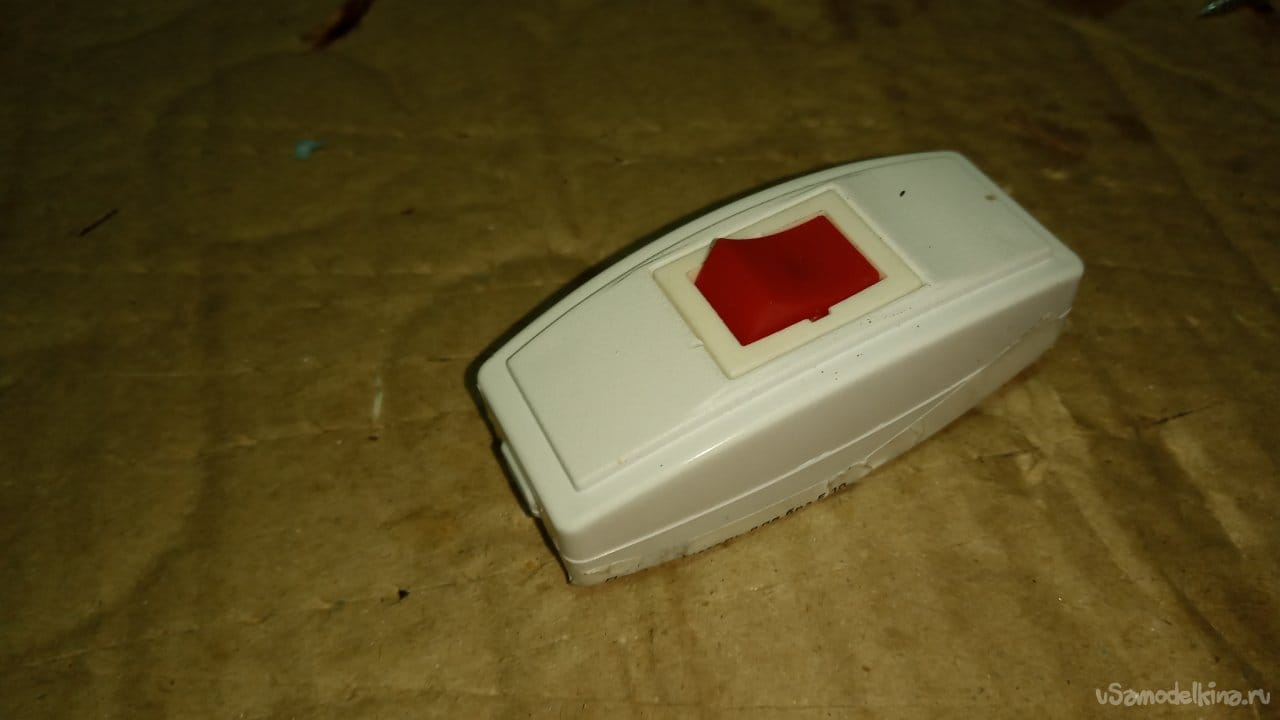 At first I just wanted to place it immediately at the exit from the handle. But, I thought that it would be possible to use it only when the lamp was not in hand. That is, in order to turn it on or off, you first need to hang the lamp somewhere. This is not very convenient. In addition, given the specifics of the upcoming use, it will be necessary, without looking, to “catch” the switch with your left hand …
Still, it is better to place it directly on the handle!
I knew the device of such switches (I often use them in my “electric” homemade products. That is why I always have it in stock). Inside the case there is a unified push button switch, inserted “on latches”: 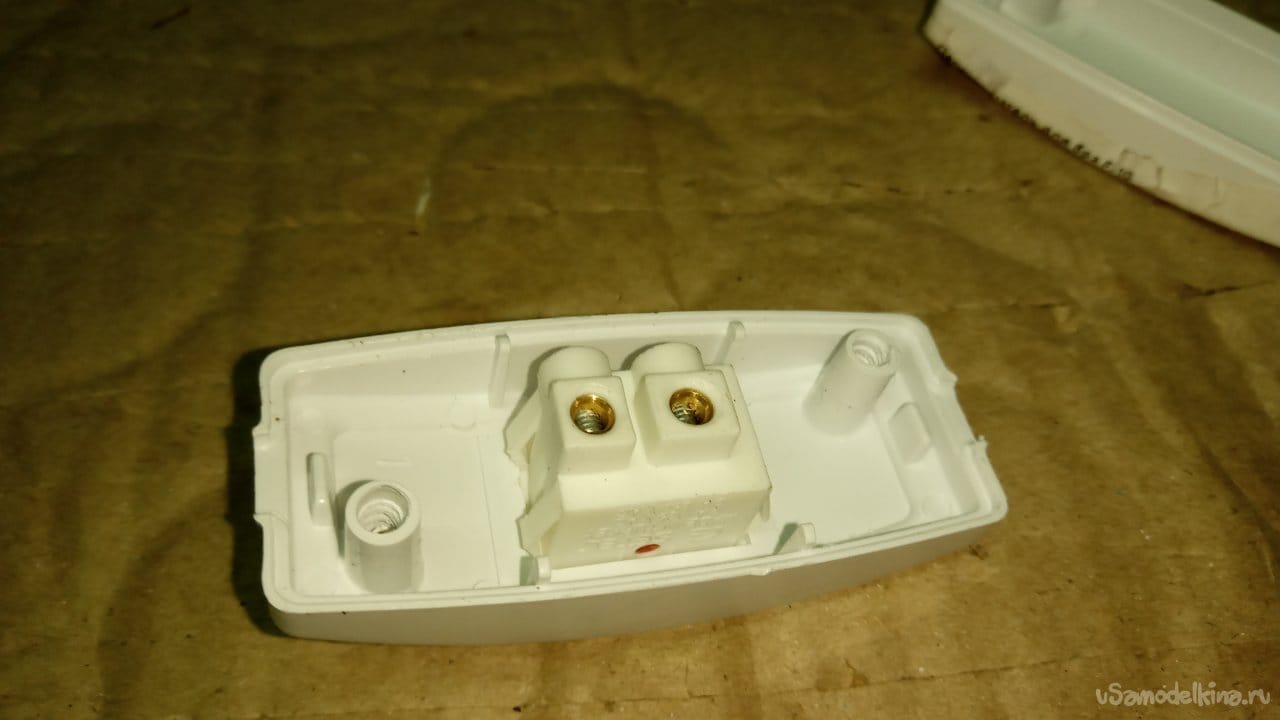 I decided to take it out and insert it directly into the handle, for which I cut a hole in it with a knife:
But this did not work out – I did not take into account that the wires in this model of the switch are switched in its lower part. And I did not have enough depth – the wires rested against the hairpin. Then I decided to raise it above the pipe, installing it together with the front half of the body. For this reason, rounded cuts were made in its ends for a closer fit to the pipe: 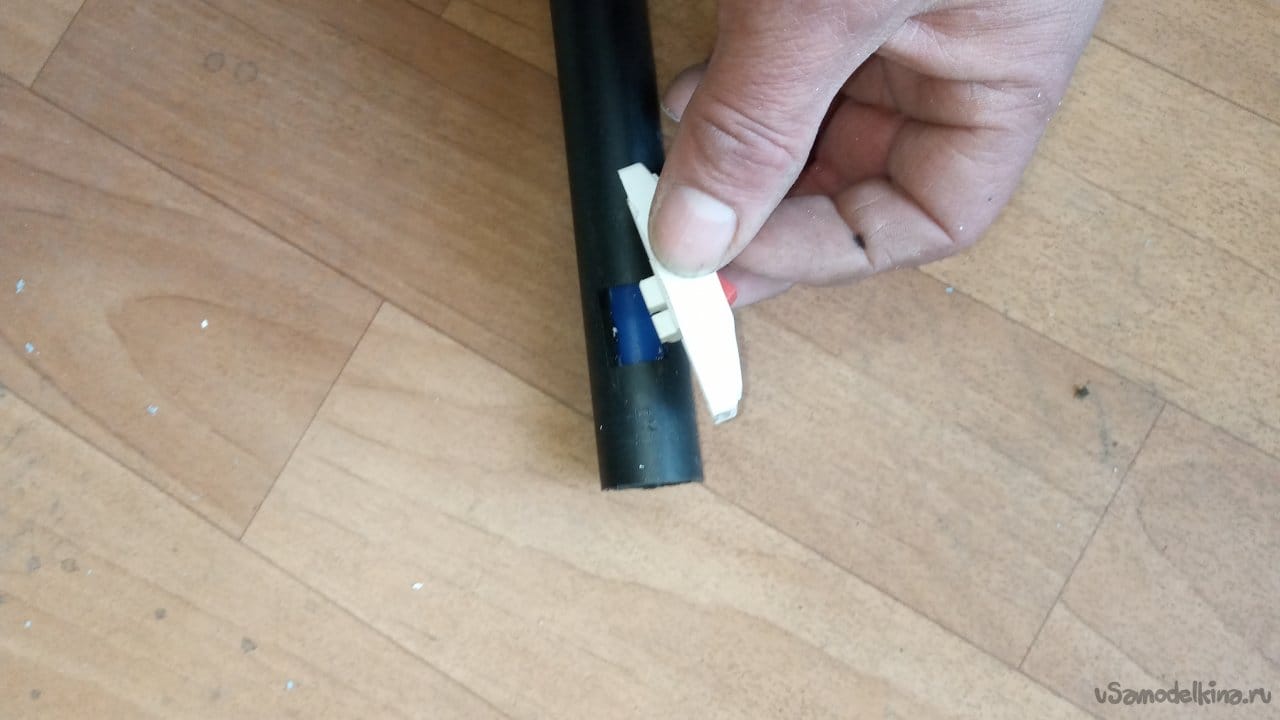 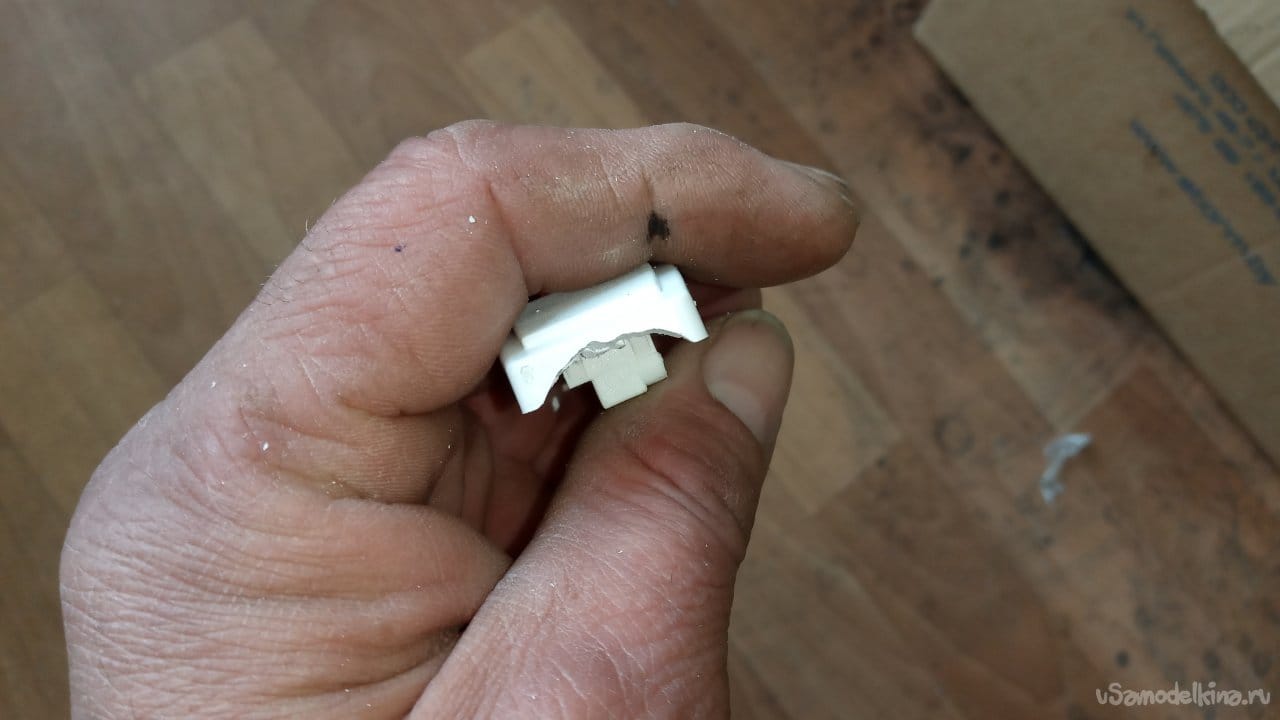 I decided to fix it with two screws, for which the holes were drilled: 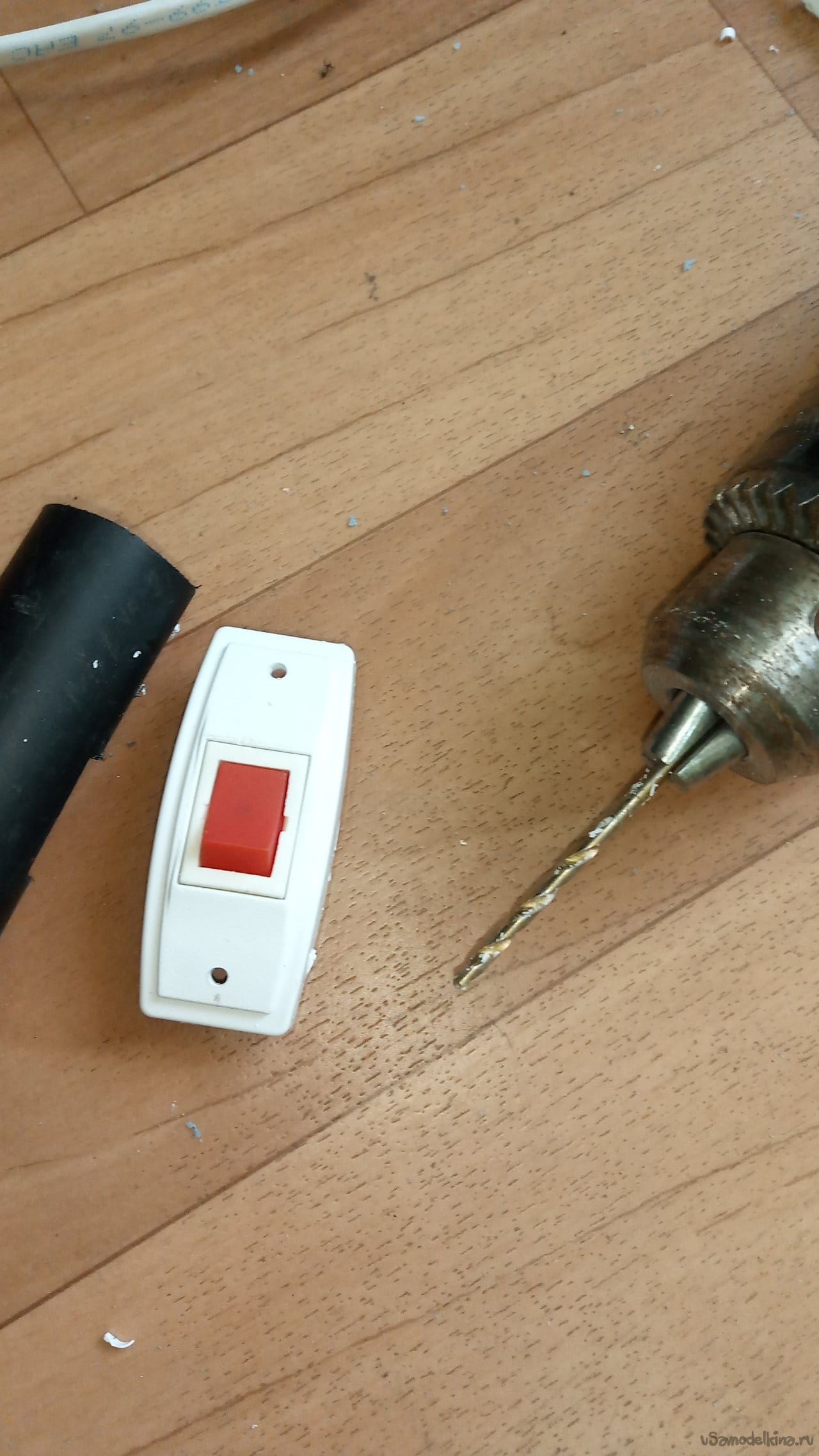 Everything is ready, you can collect: 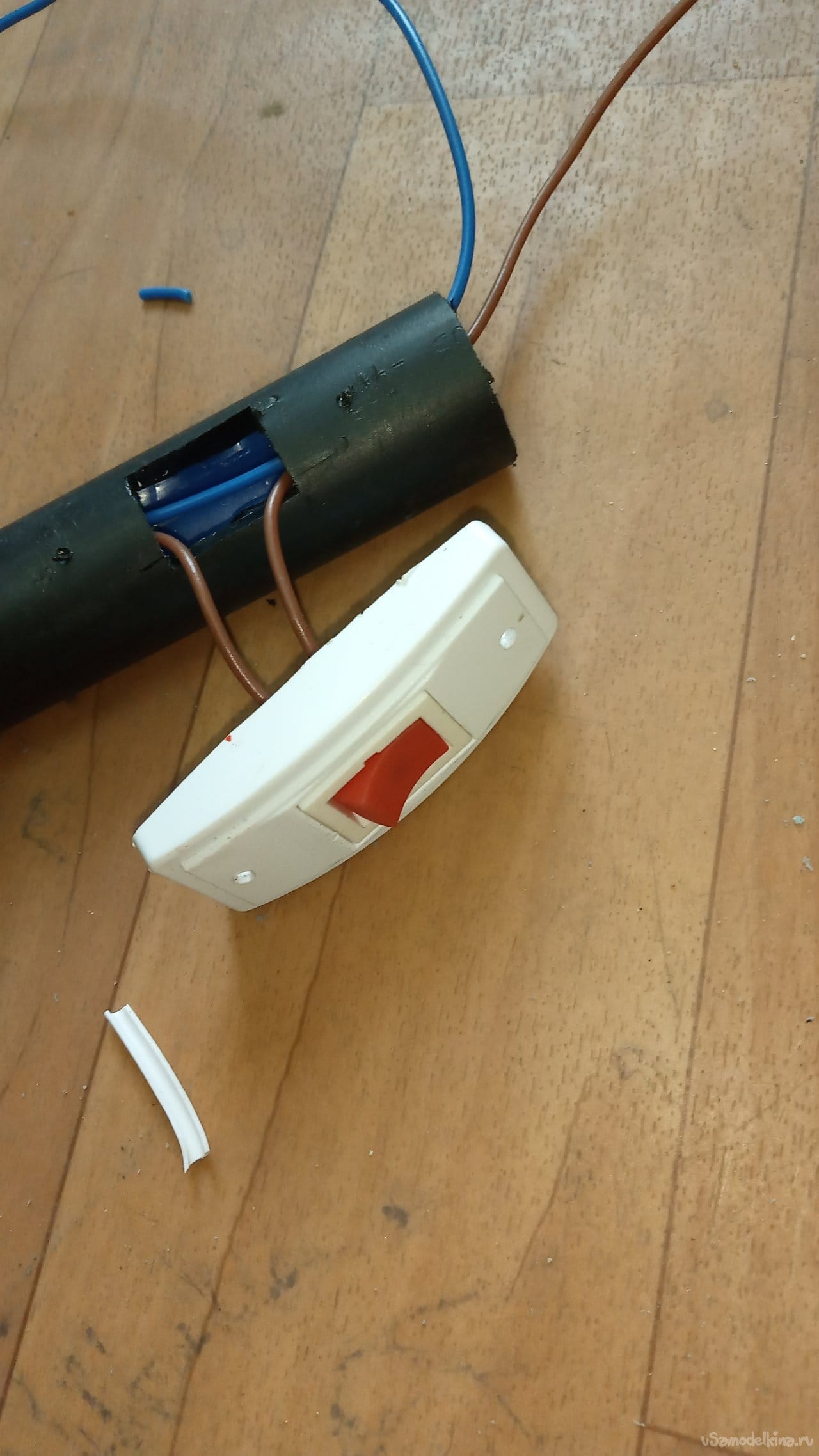 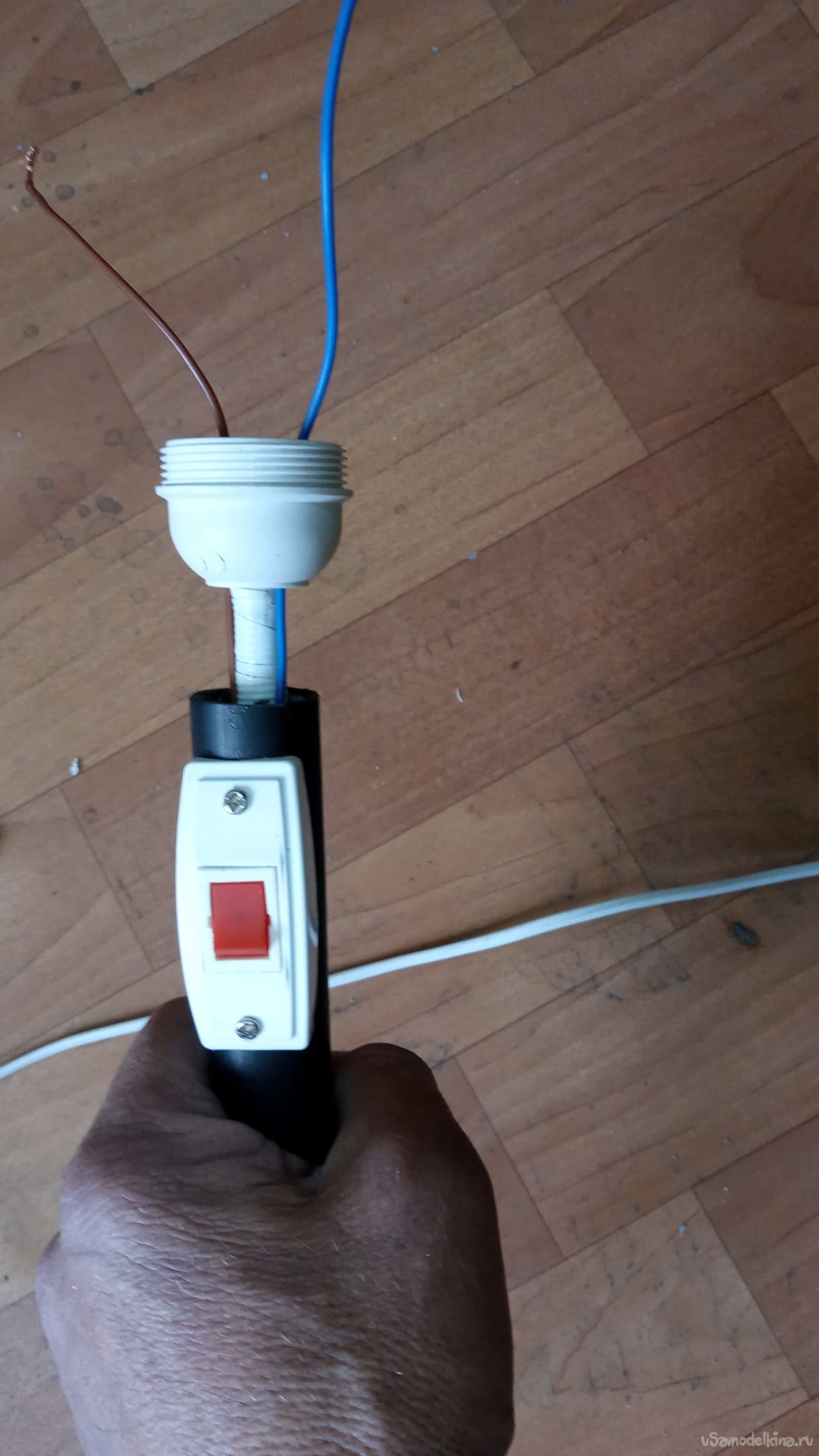 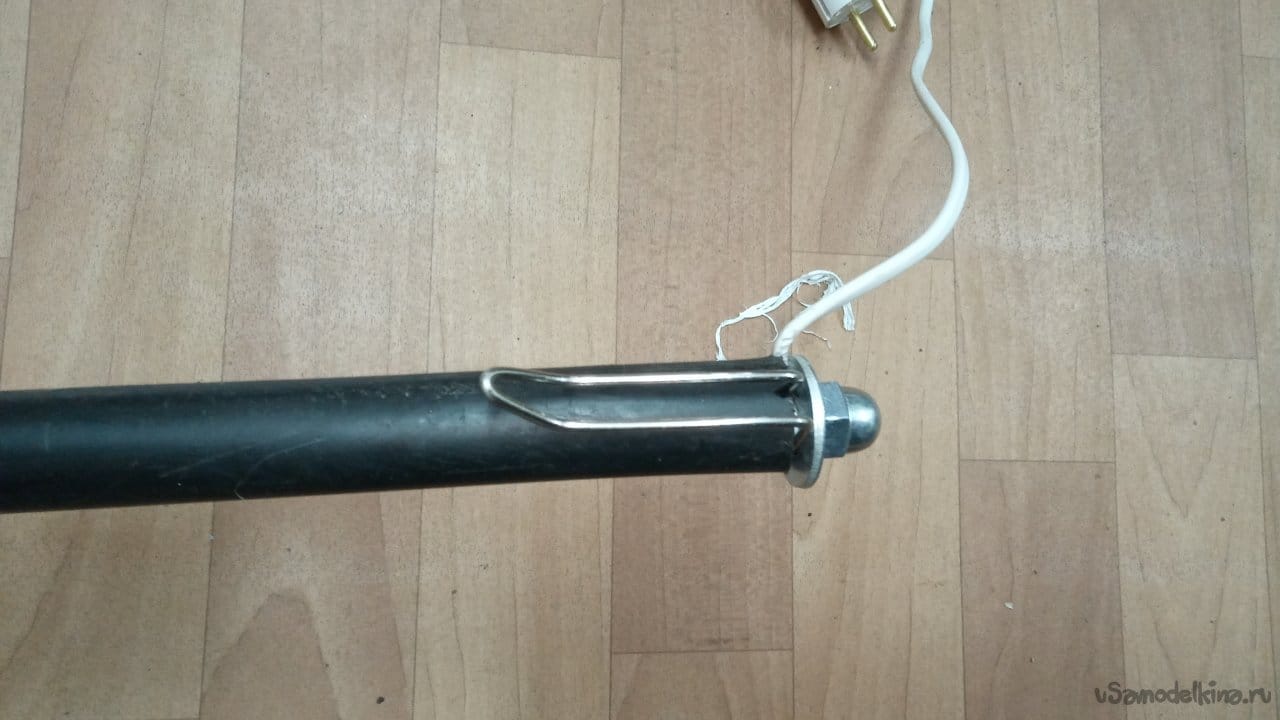 That's all. The lamp is ready: 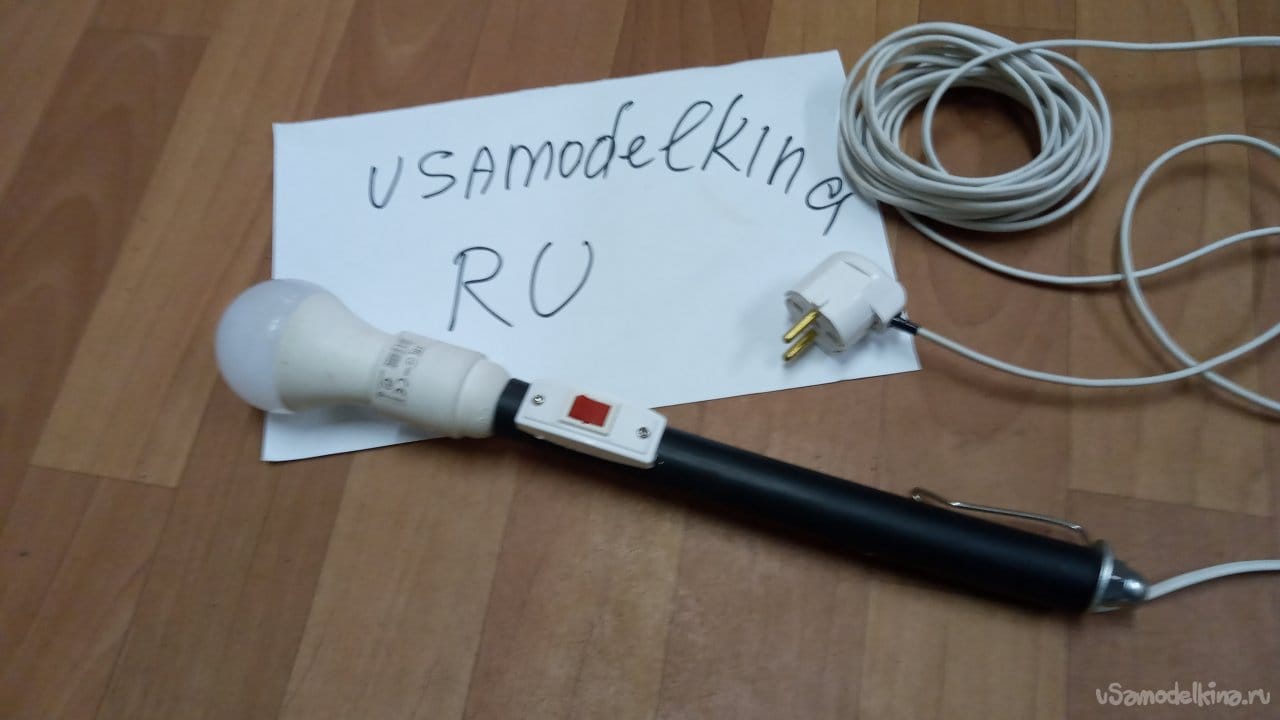 It turned out to be very convenient. Without looking, it can be easily turned off with one hand and hung on a belt, or by a trouser pocket. It can be easily and quickly removed and turned on. The elongated handle allows for further illumination. And it is also convenient not only as a “putty equipment” … With it, it is convenient, for example, to look for something, highlighting darkened areas. A kind of powerful “flashlight on a cord”. 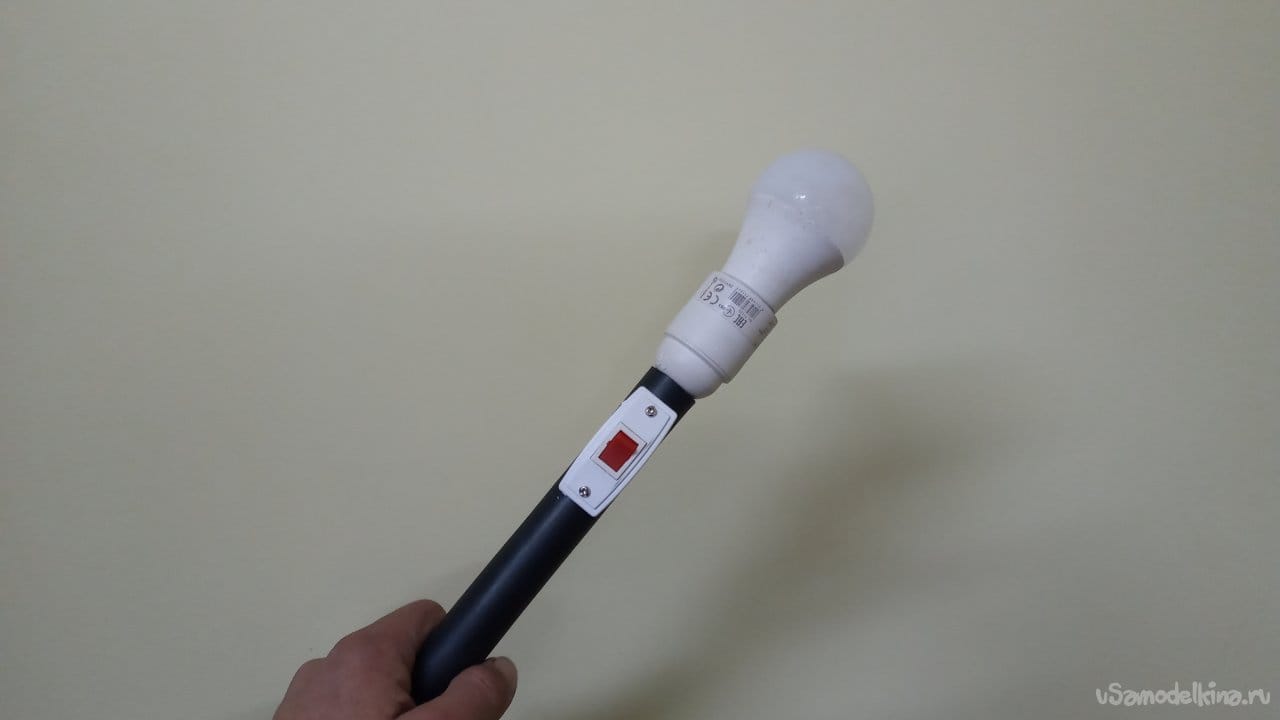