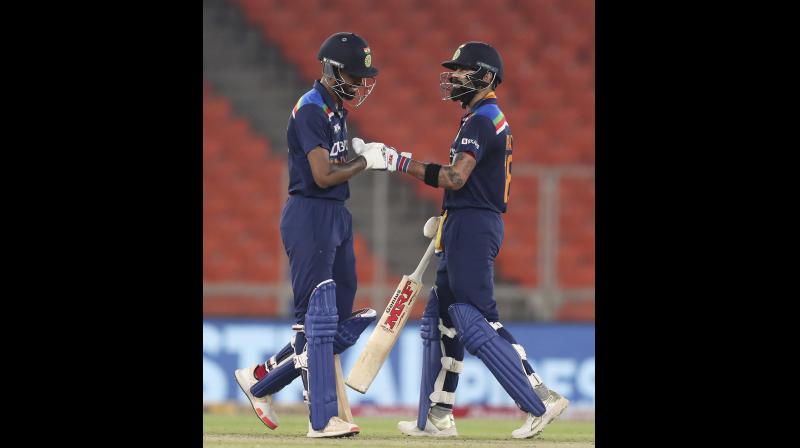 Ahmedabad: Dishing out a dominating all-round show, India toppled England in the high-scoring fifth Twenty20 to not only claim the series 3-2 but also prove that their preparations for the T20 World Cup are moving in the right direction.

Rohit Sharma’s sensational 64 off 34 balls and skipper Virat Kohli’s unbeaten 80 off 52 balls powered India to a massive 224 for two, their best ever total against England, after the visitors won the toss for the fourth time in the series and opted to field on Saturday.

In the run chase, Jos Buttler (52 off 34) and Dawid Malan (68 off 46) kept India on the edge with a threatening 130-run stand but England’s challenged fizzled with the fall of the wicketkeeper-batsman in the 13th over bowled by Bhuvneshwar Kumar.

England’s innings eventually ended at 188 for eight as they lost match by 36 runs.

The dew was a factor in the second innings but the Indian bowlers overcame that to defend the target on a batting beauty.

Bhuvneshwar was impressive in his comeback series and saved his best for the decider to end with two wickets for 15 runs in four overs.

Earlier, preparing themselves for success in all conditions ahead of the World Cup, India thrived under the pressure of a series-decider to produce their batting performance of the series.

Jofra Archer and Mark Wood had troubled the Indians with their extra pace in earlier games but Rohit and Kohli sent them to the cleaners on way to their 94-run stand off 54 balls. The other major contributions came from Suryakumar Yadav (32 off 17 balls) and Hardik Pandya (39 not out off 17 balls).

The hosts hammered 67 runs in the last five overs to give the innings a perfect finish.

Barring Ben Stokes and Adil Rashid, all England bowlers leaked more than 10 runs per over with Chris Jordan (0/57) being the most expensive.