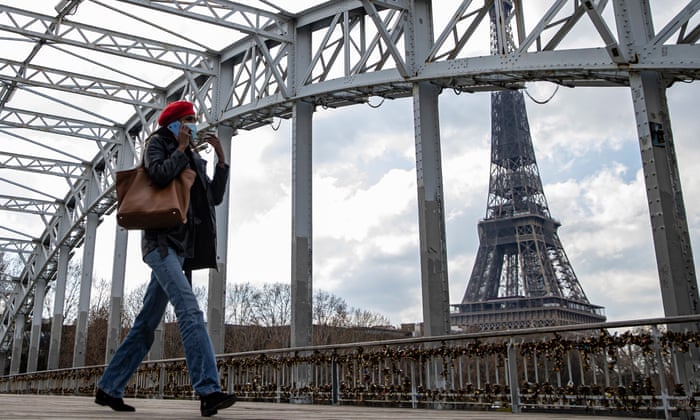 A rise in coronavirus cases across Europe could jeopardise the UK’s roadmap out of lockdown and makes foreign holidays “extremely unlikely”, experts have warned.

Several European countries have recorded increases in the number of coronavirus cases in recent weeks, with Italy recording a near-doubling in the past month and Paris entering a new month-long lockdown to curb the spread.

Andrew Hayward, a professor of infectious disease epidemiology at University College London and a member of the Scientific Advisory Group for Emergencies (Sage), said the EU surge showed “the potential for cases to shoot up” in the UK, warning that Britain needed to be careful in easing lockdown measures.

He said the increasing rates in Europe could last up to several months, and that it was “very worrying” to see a possible third wave of the virus while vaccination rates were comparatively low.

“From what I understand, quite a lot of that is the emergence of the strain that came from the UK, the B117 strain, which is more transmissible, which is the same strain that’s still here now,” he told Times Radio on Saturday morning. “I think it just shows that the lockdown in the UK is necessary and we need to be careful as we release and to watch the figures because this shows the potential for cases to shoot up.”

When asked if another wave of coronavirus was possible in the UK, Hayward said it was “possible, likely even”, but that the impact was likely to be less severe due to the vaccine programme.

“I guess the difference is that another wave will cause substantially fewer deaths and hospitalisations because of high levels of vaccination across the sorts of people who would have ended up in hospital or unfortunately dying if they haven’t been vaccinated,” he said. “So the consequences of another wave are less. I think the challenge is, of course, we don’t know exactly how much less.”

With many Britons eager to book holidays, he also warned that the news “obviously” had implications on travel.

Dr Mike Tildesley, a member of the scientific pandemic influenza group on modelling, a Sage sub-group, said the increases in Europe made foreign summer holidays look “extremely unlikely”. He said travellers risked bringing back new variants of coronavirus that may be less affected by vaccines.

“I think that international travel this summer is, for the average holidaymaker, sadly I think extremely unlikely,” he told the BBC Radio 4 Today programme. “I think we are running a real risk if we do start to have lots of people going overseas in July and August because of the potential for bringing more of these new variants back into the country.

“What is really dangerous is if we jeopardise our vaccination campaign by having these variants where the vaccines don’t work as effectively spreading more rapidly.”

Turkey, a popular travel destination which had announced it would welcome tourists without vaccination passports, negative tests or quarantine, is also experiencing a rise in cases. Its daily cases increased from 8,424 on 1 March to 21,030 on Friday night.

The general secretary of the Turkish Medical Association told the Times that whether or not the country would open up to tourists depended on the success of its vaccine rollout – which has now given the necessary two doses to just 5.8% of the population.

Across the EU, citizens are entering new restrictions to curb the growing spread of the virus. Nearly a third of the population of France entered a month-long lockdown at midnight on Friday after the country recorded almost 35,000 cases in 24 hours, with cases rising by a quarter in the past week alone.

Schools and shops are closed across Italy and restaurants are operating under limited capacity after a rise in cases this month, while non-essential shops and cultural venues have closed for three weeks in Poland.

The German chancellor, Angela Merkel, said it was likely the country would need to apply an “emergency brake” and reimpose lockdown restrictions, with the Robert Koch Institute (RKI) for infectious diseases warning that coronavirus was spreading at a “very clearly exponential rate”.

In China, authorities recorded the first locally transmitted case since mid-February on Saturday, a staff worker at a hospital who had received two shots of a vaccine between the end of January and early February, according to state media.