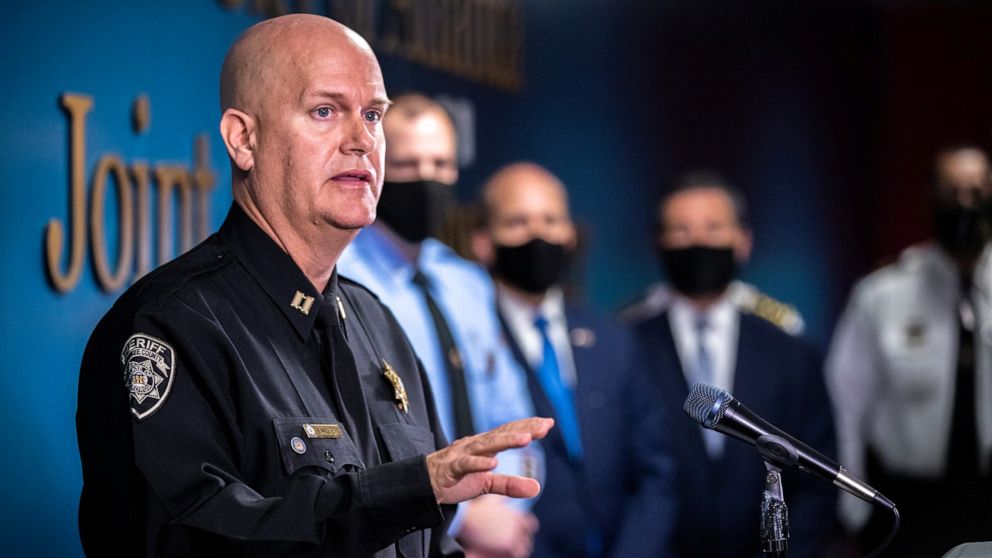 The sheriff’s department in Cherokee County, Georgia, is facing backlash after a captain described the alleged gunman in the killings of eight people at Atlanta-area spas as having “a really bad day.”

The suspect, 21-year-old Robert Long, was taken into custody hours after the Tuesday shootings which took place at three different locations: one in Cherokee County and two in Atlanta.

“And he was pretty much fed up and had been, kind of, at the end of his rope. And yesterday was a really bad day for him, and this is what he did,” Baker said.

“This is rage inducing. Not even 24hrs since he killed 8 people & a Cop apologizes for him,” tweeted Qasim Rashid, a human rights lawyer and former candidate for Congress.

Eliza Orlins, a candidate for Manhattan district attorney, tweeted, “As a public defender, I’ve had cops call a young client of mine names I refuse to repeat for sleeping on a train platform. Two. Systems. Of. Justice.”

Some police officials told ABC News that they believe Baker was trying to convey to reporters what Long told investigators, and that the use of the phrase “bad day” was Long’s words.

Cherokee County Sheriff Frank Reynolds in a statement on Thursday defended Baker, saying his comments were “taken or construed as insensitive or inappropriate” but that they “were not intended to disrespect any of the victims, the gravity of this tragedy, or express empathy or sympathy for the suspect.”

“Captain Baker had a difficult task before him, and this was one of the hardest in his twenty-eight years in law enforcement,” Reynolds said.

“I have known and served with Captain Baker for many years. His personal ties to the Asian community and his unwavering support and commitment to the citizens of Cherokee County are well known to many,” he continued. “On behalf of the dedicated women and men of the Cherokee County Sheriff’s Office we regret any heartache Captain Baker’s words may have caused.”

Reynolds, who attended a vigil for the victims Thursday night, told Atlanta ABC affiliate WSB that a new public information officer from outside the sheriff’s office had been assigned to the case.

A post from March 30, 2020, said, “Place your order while they last,” with a smiley emoji next to an image of T-shirts for sale that read, “Covid-19 Imported from Chy-na.”

Baker did not immediately respond to ABC News’ request for comment.

The eight victims, the majority of whom were women of Asian descent, were gunned down at three spas in the Atlanta area amid a rise in anti-Asian American and Pacific Islander hate crimes across the nation.

Long allegedly admitted to the killings, telling “investigators that he blames the massage parlors for providing an outlet for his addiction to sex,” the Cherokee County Sheriff’s Office said in a statement. Baker said at the news conference, “It’s a temptation for him that he wanted to eliminate … those were comments that he made.”

The Cherokee County Sheriff’s Office said that “Long told investigators the crimes were not racially motivated.” Reynolds said at Wednesday’s news conference, “It may be targets of opportunity. We believe he frequented these places.”

However, Atlanta police said Wednesday evening, “Investigators are taking a hard look at what motivated the shooter. Our investigation is far from over and we have not ruled anything out.”

President Joe Biden on Thursday ordered flags to half-staff in honor of the victims until March 22.

New Jersey Rep. Andy Kim tweeted Wednesday, “I’ve been asked if the violence against [Asian Americans and Pacific Islanders] is new, and if it is getting better with the increased recent visibility. The answer to both is no. Discrimination/violence existed before COVID and it will continue after. And sadly, I don’t think we have seen the worst of it.”

“I can’t tell you how much it means to me and others that anti-AAPI violence has gotten attention,” he continued. “Now we need follow through. Give AAPI communities more resources/coordination.”

“It’s up to us to speak out against it and to act against it,” he said.

Long is charged with eight counts of murder. Long waived his first court appearance, according to his attorney, J. Daran Burns, who was appointed to represent Long by the Cherokee County Office of Indigent Defense on Wednesday.

“Everybody is doing their jobs, both law enforcement and the District Attorney’s Office. Now, our firm will conduct a thorough investigation on our client’s behalf,” Burns said in a statement.