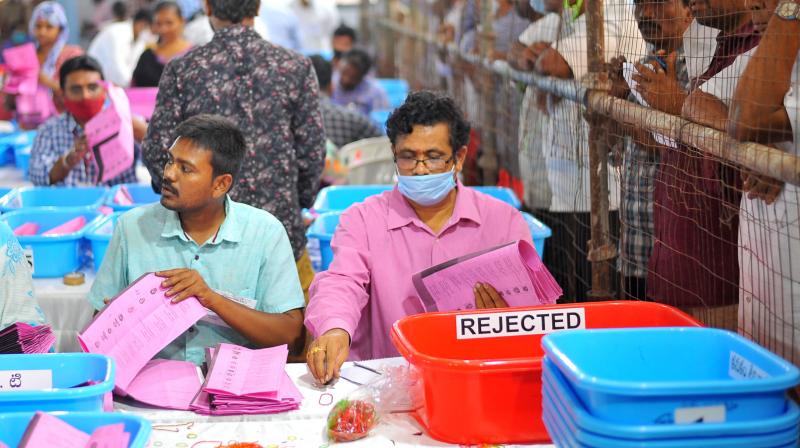 Hyderabad: With no candidate securing more than 50 per cent of votes in the Hyderabad-Ranga Reddy-Mahbubnagar and Nalgonda-Warangal-Khammam graduate constituencies of the Legislative Council, the Election Commission has begun counting the second preference votes for both the seats on the third consecutive day of the counting of votes for the elections.

The counting of valid first preference votes was completed in seven rounds in which TRS candidate Palla Rajeshwar Reddy was ahead with 1,10,840 votes while independent candidate Teenmar Mallanna was placed second with 83,290.

This put Rajeshwar Reddy ahead by 27,500 votes against his nearest rival in first preference votes. In the due process, 55 out of 71 candidates with the least votes were eliminated and Reddy was leading with 1,11,190 votes while Mallanna got 83,629.

Telangana Jana Samiti candidate Prof. Kodandaram who got 70,472 votes turned out to be crucial to decide the winner.

In Hyderabad, TRS nominee Surabhi Vani Devi was leading with 1,12,921 votes followed by N. Ramchander Rao, the incumbent MLC from the BJP, with 1,04,885 votes and independent candidate Prof K Nageshwar with 53,747 votes. Vani was winning all successive rounds in first and second preferences votes. As many as 49 candidates out of the total 93 with the least number of votes were eliminated.

Trends suggest that Surabhi would most likely touch the magic figure of 1,68,519 votes (half-way mark) +1 vote to emerge as the winner.

As many as 43,000 votes have been declared invalid in both the seats. On the instruction of the Election Commission, returning officers at the counting centres deployed more staff to speed up the counting.

If the main candidates do not get a majority in the second preference vote, the EC will have to take up the counting of third preference votes. This would require another 24 hours and the process would continue till any one candidate gets 50 per cent-plus one vote.

Officials said that at Nalgonda-Warangal-Khammam constituency, counting of third preference votes would be inevitable and the results will most likely be announced after Saturday evening.

Domestic violent extremist attacks could be ‘elevated’ in US in 2021: Report