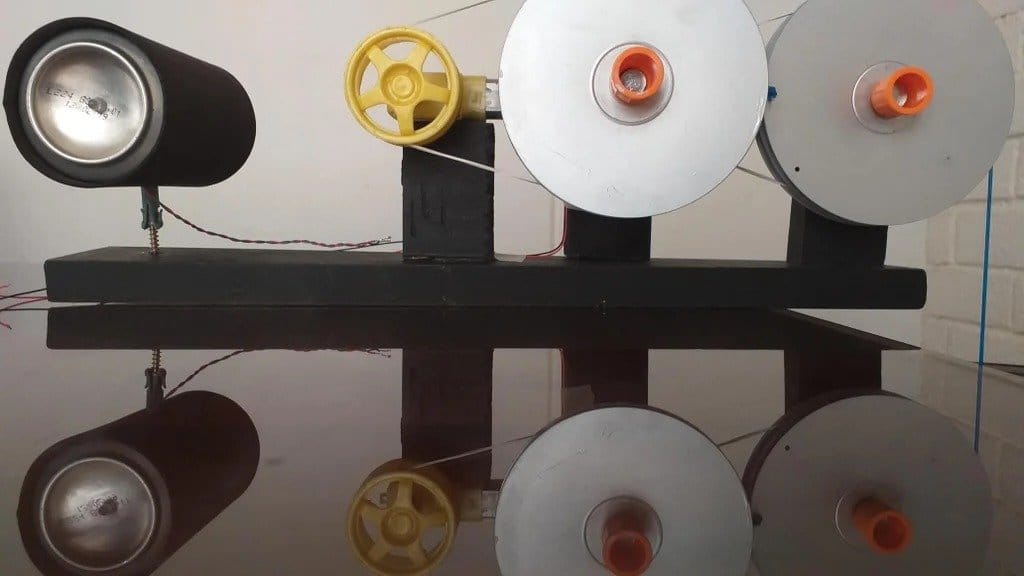 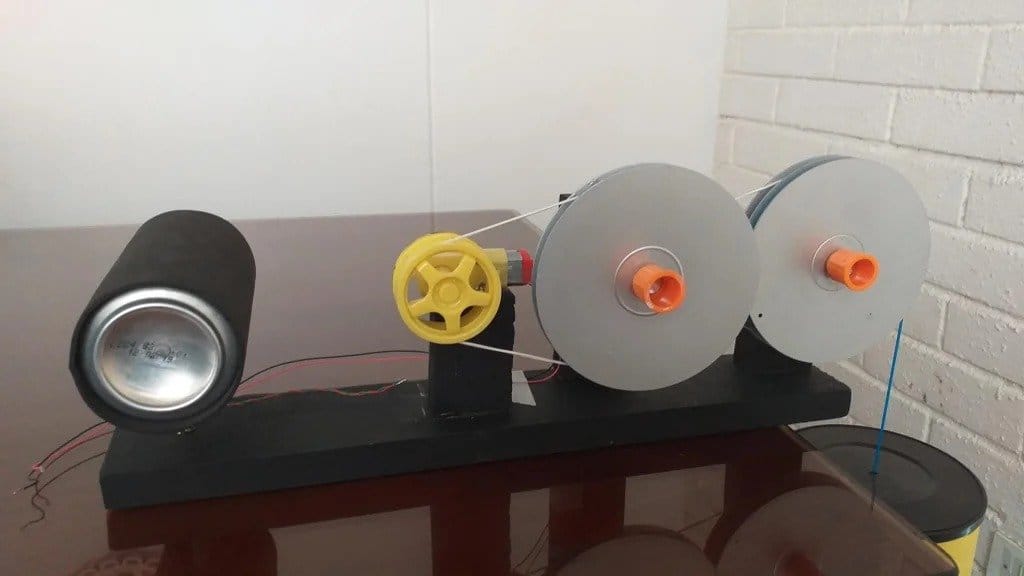 In our Since then, one of the most popular proposals for alternative renewable energy sources is solar panels. However, systems based on them have a number of disadvantages:
1) Although the price has decreased in recent years, the cost of solar panels is still high
2) The efficiency is very low, the most famous models have up to 30%
3) Energy storage is done using battery systems or supercapacitors, which makes solar-powered systems much more expensive.
4) On rainy and cloudy days and nights, solar panels are completely ineffective.
Inventor with the nickname zezarandrade tried develop a system capable of storing solar energy for indefinite periods of time. It is such a mechanical battery based on the simple operation of a belt and a pulley. To substantiate his theory, he decided to build a model of the device.

To build a demo models he uses the following
Tools and materials: – DC motor with gear + 2 wheels;
– CD CD – 5 pieces;
– Wooden slats
(12 cm x 4.5 cm x 2 cm) – 2 pieces
(7 cm x 4.5 cm x 2 cm) – 1 piece
(40 cm x 7 cm x 2 cm) – 1 piece;
-Cork;
– Plastic lid – 3 pcs;
-Jar with a diameter of 14 cm;
-Fasteners;
-LED;
-Resistor 220 Ohm;
– Aluminum can;
-Nylon cord 1 meter;
Step one: principle of operation and theoretical calculations
It has long been known that energy is not created and not collapses, but transforms.
Taking into account this principle, we can take part of the energy produced by solar panels or some other source of electrical energy, and convert it, say, into potential energy.
The idea is very simple: if we take the mass m (kg) and raise it to the height h (mts), then we will have the value of the potential energy Ep = m * g * h, where m is the mass in kg. , g is the acceleration of gravity, h is the height in meters at which the mass is located.
We are going to raise and lower this mass using a system of pulleys and belts.
A pulley is a wheel on an axle or shaft designed to support movement and change the direction of a belt or tensioned cable. In a belt and pulley system, the belt runs along a groove in the pulley so that power can be transferred either from one pulley to another, or from a pulley directly to an application that requires power.
A belt drive is a loop of flexible material that transfers motion from one rotating pulley to another. Each pulley is mounted on a shaft. The main function of the belt is to transfer power (rotational energy) from one source to another. While the pulley, which has a groove around the circumference, allows the belt to pass smoothly through it when transmitting rotational motion.
Figure 1 shows the general operation of the system:
During the day, on sunny days, the energy generated by solar panels or other form of energy causes the engine M to start and raise the mass m to a height h, in the absence of sunlight or at night the mass m under the action of gravity starts to descend, and now the engine behaves like a generator (G), generating the necessary electricity.

problems to raise the weight m, we resort to a system of pulleys and belts similar to that shown in Figure 2.

One of the interesting characteristics of pulleys and belt systems is that we can lift large loads with little effort.
The figure shows that the relationship between the radius of a pulley on the motor shaft and the radius of the next pulley (P2) is:
K1 = R/r1, where K1 is the ratio between pulleys P1 and P3, R is the radius of the pulley P3, and r1 is the radius of the pulley P1.
Similarly, the ratio (K2) between pulleys P2 and P4 is: K2 = R/r2, where R is the radius of the P4 pulley and r2 is the radius of the P2 pulley.
For the proposed system:
r1 = 2.5 cm, r2 = 1.5 cm, R = 5 cm.
So, K1 = R/r1 = 5/2.5 = 2; K1 = 2
This means that for a full turn of the P3 pulley it is required to turn the P1 pulley two turns.
Then we have: K2 = R/r2 = 5/1.5 = 3.33, which means, that in order for P4 to complete a full revolution, P2 needs to make 3 1/3 revolutions.
The overall gear ratio of the entire pulley system is: K = K1 * K2 = 2 * 3.33 = 6.66, which means that 6.66 revolutions of P1 is required for a full revolution of the P4 pulley.
Although it is true that the speed of the pulley P4 decreases, it is also true that the force on the last pulley increases 6.66 times, and the higher the K-factor, the lower the required force.
On the contrary, the gear ratio is 1/K = 1/6.66 = 3/20, that is, 3 revolutions of the P4 pulley is converted into 20 revolutions of the P1 pulley, and therefore 20 revolutions of the motor shaft.
This is a small but very important part of the calculations made by the foreman.
Based on theories and calculations, he draws the following conclusions:
1) Using a pulley and belt system allows us to lift heavy loads with low energy consumption.
2) Raising a mass to a certain height allows us to store a certain amount of potential energy, which, by turning the reverse process can be used and transferred to the engine, which now acts as a generator, and thus obtain electrical energy.
3) Low maintenance cost of the device
4) Easy to install and dismantle
5) Simple design
6) No lubrication required
7) Easy to replace due to low cost.
8) Power can be transmitted vertically, horizontally or diagonally.
Step Two: Assembling
Figures 3a, 3b, 3c, 3d, 3e and 3f show the mounting of a motor on a board. The craftsman removed the rubber covering the wheel and used a yellow plastic part as the first P1 pulley. 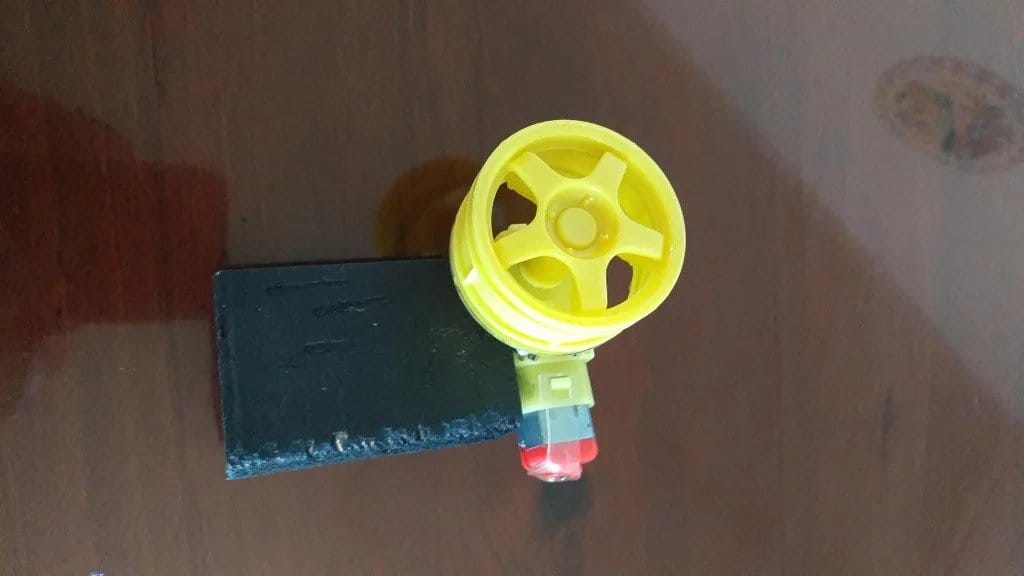 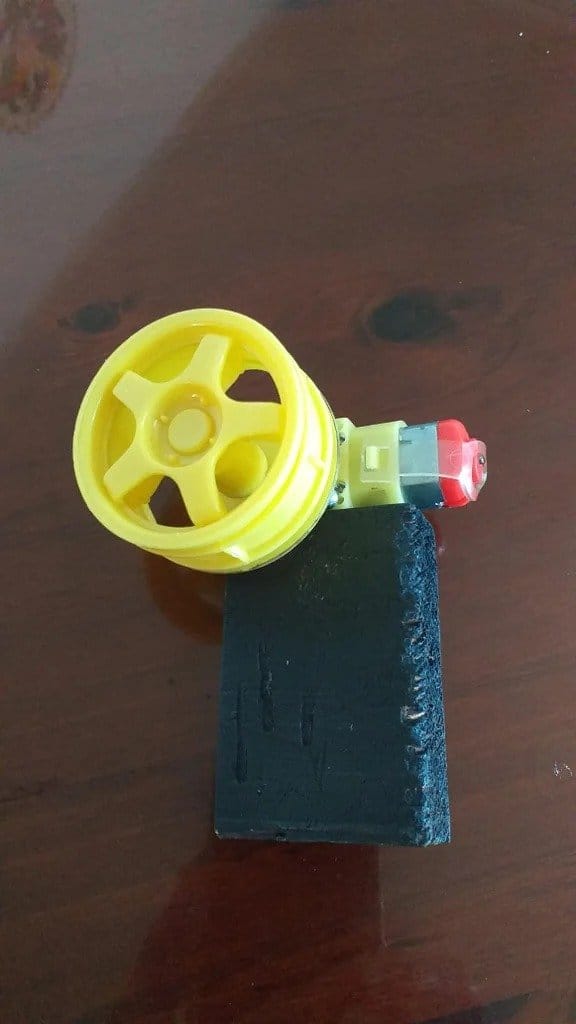 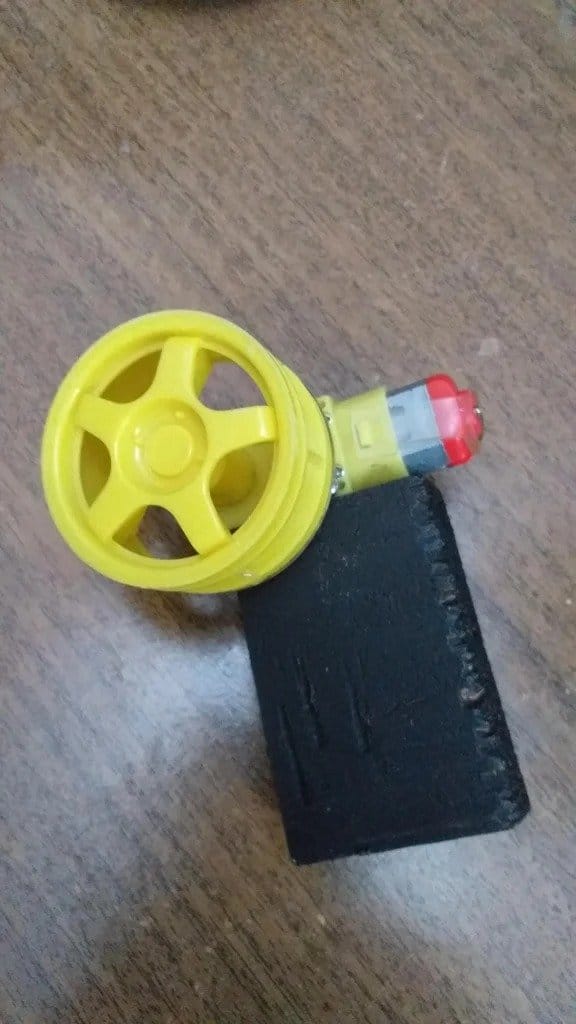 Figures 4a, 4b and 4c show details of pulleys P2 and P3.
The craftsman made a P2 pulley from a wine bottle cork and two round pieces of cardboard.
P3 pulley consists of two CDs, and in the middle he placed a plastic coffee can lid.
Both pulleys, P2 and P3, are mounted on plank as shown in the photos. 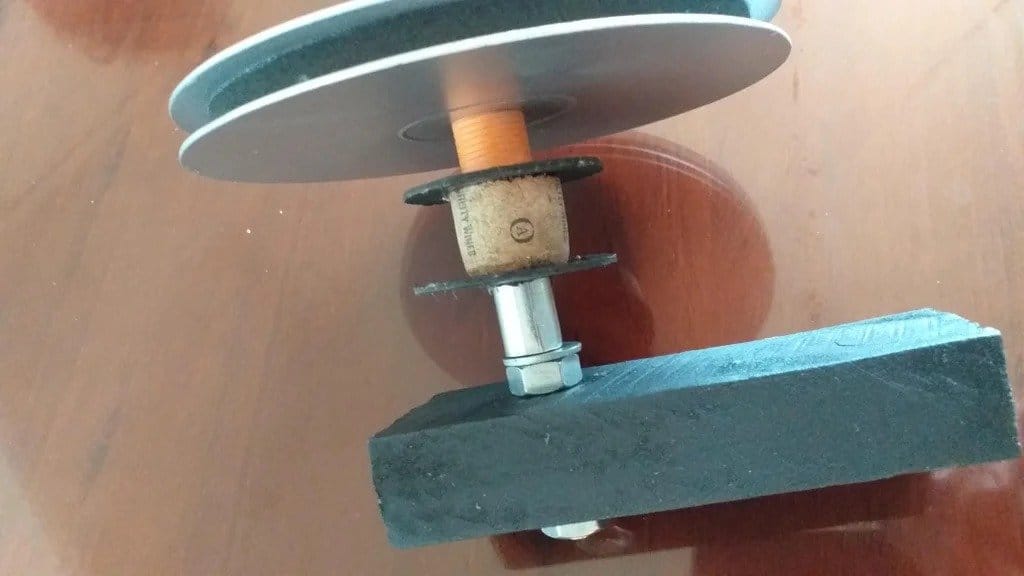 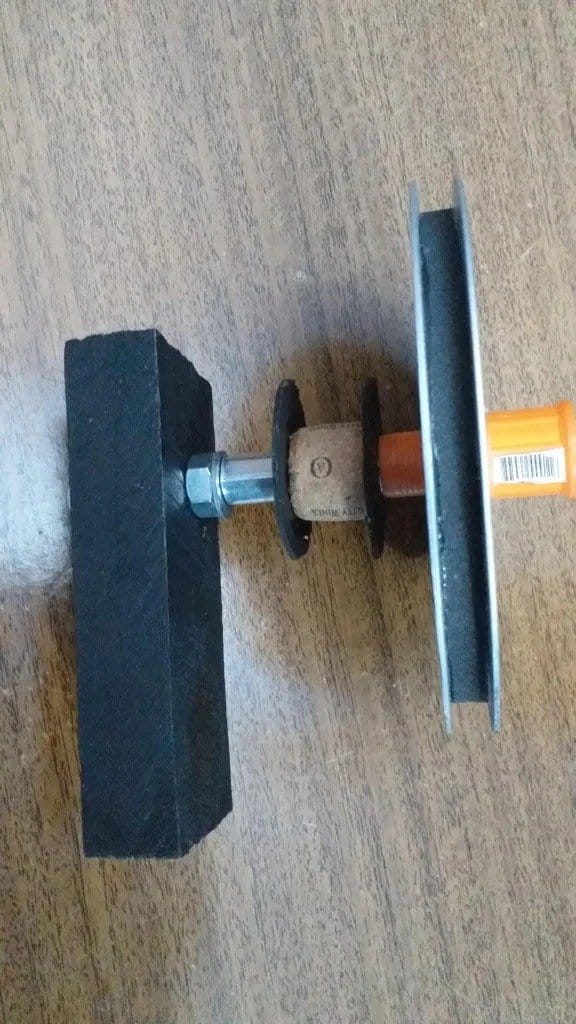 Figures 5a, 5b, 5c, 5d, 5e, and 5f show a P4 pulley consisting of 3 CDs separated by two plastic covers, one of the spaces for a nylon rope supporting the weight m. 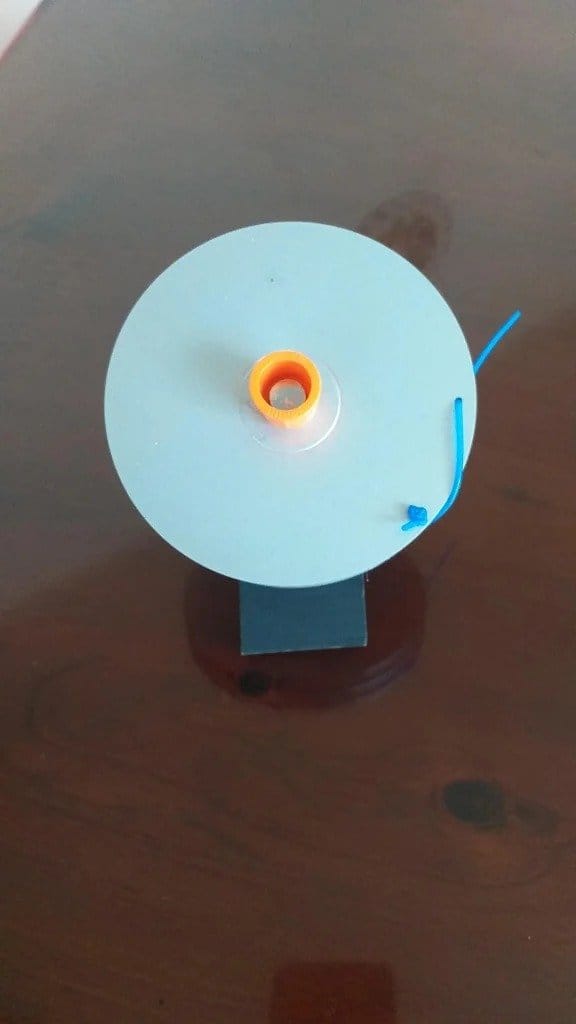 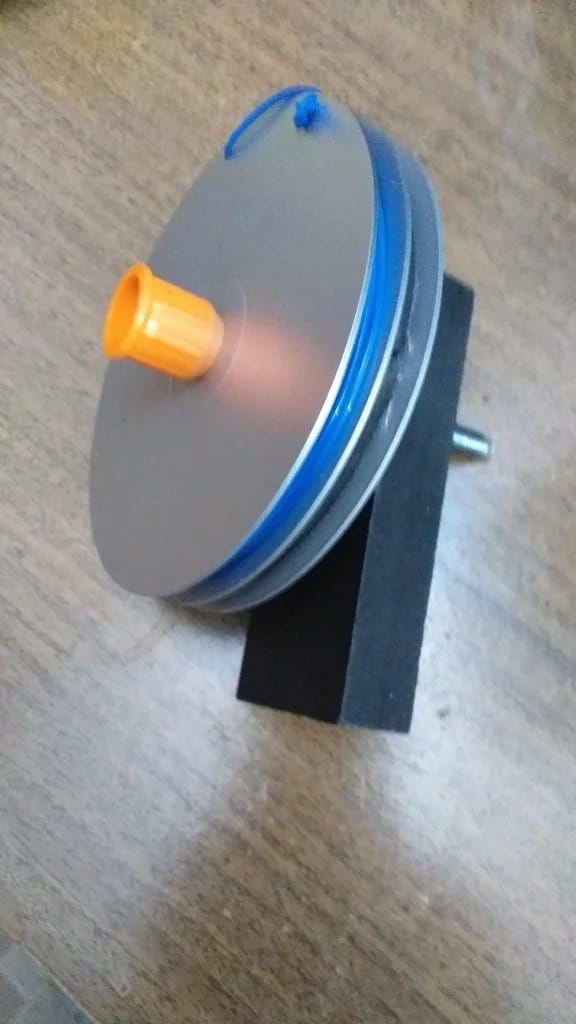 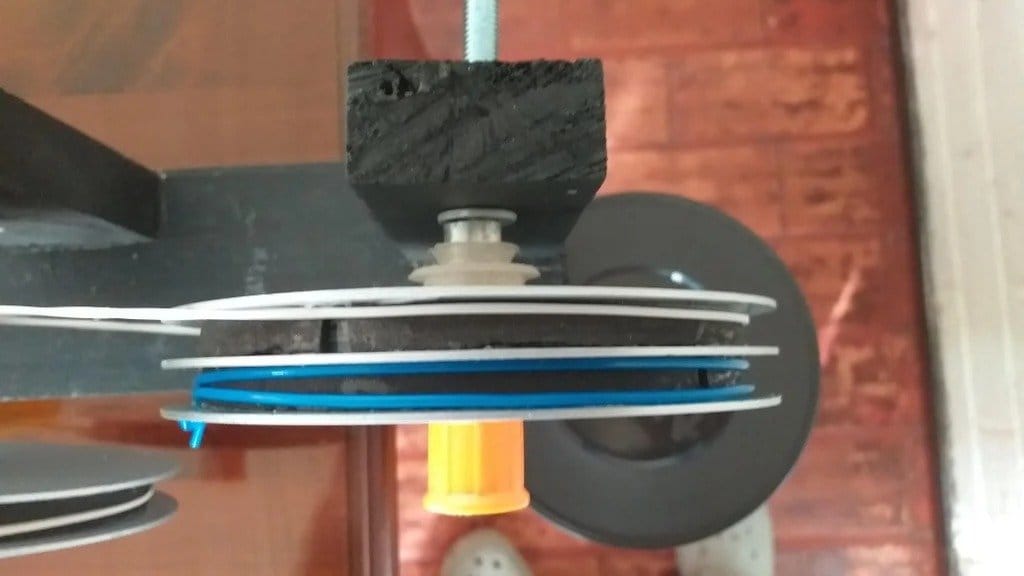 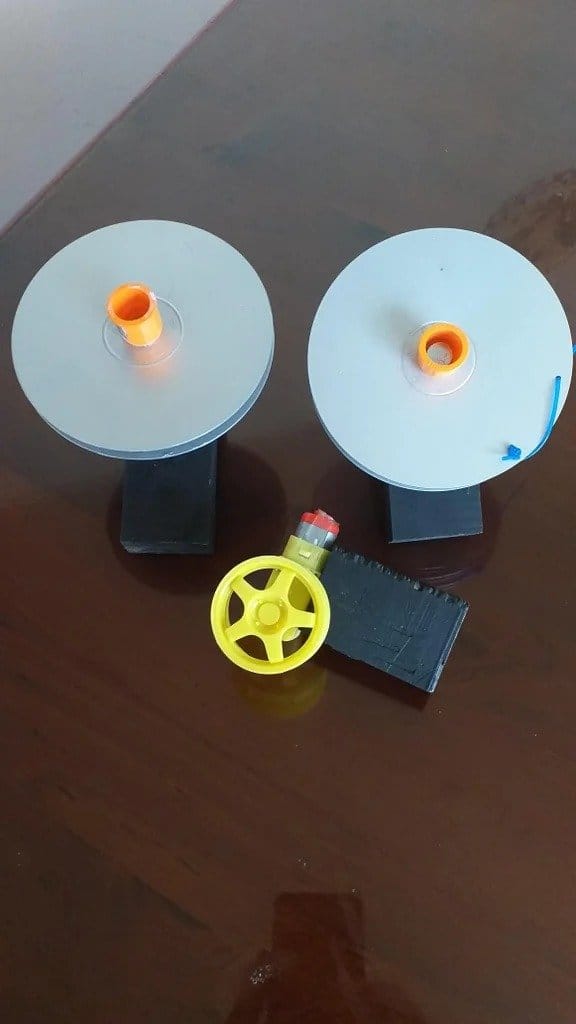 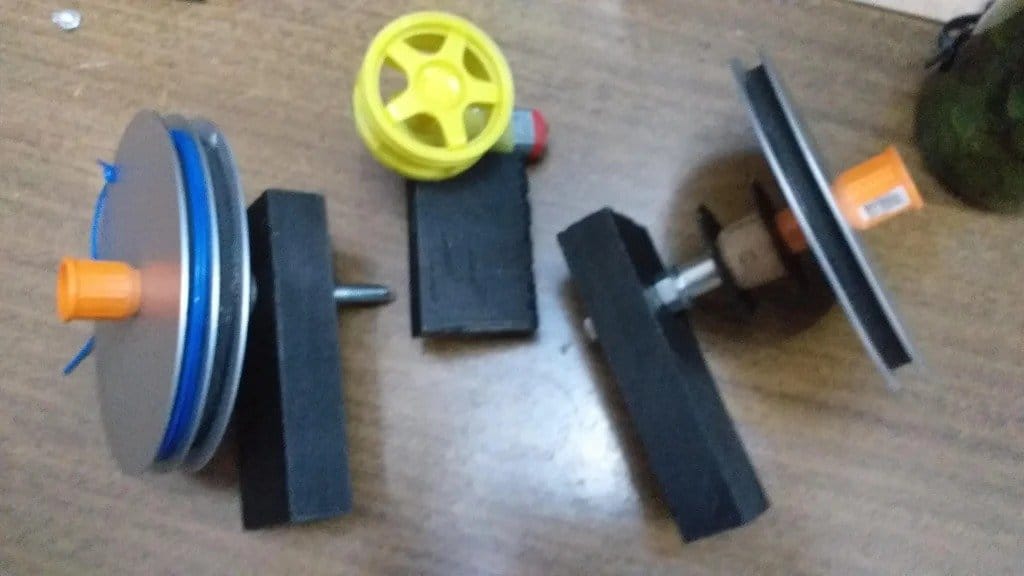 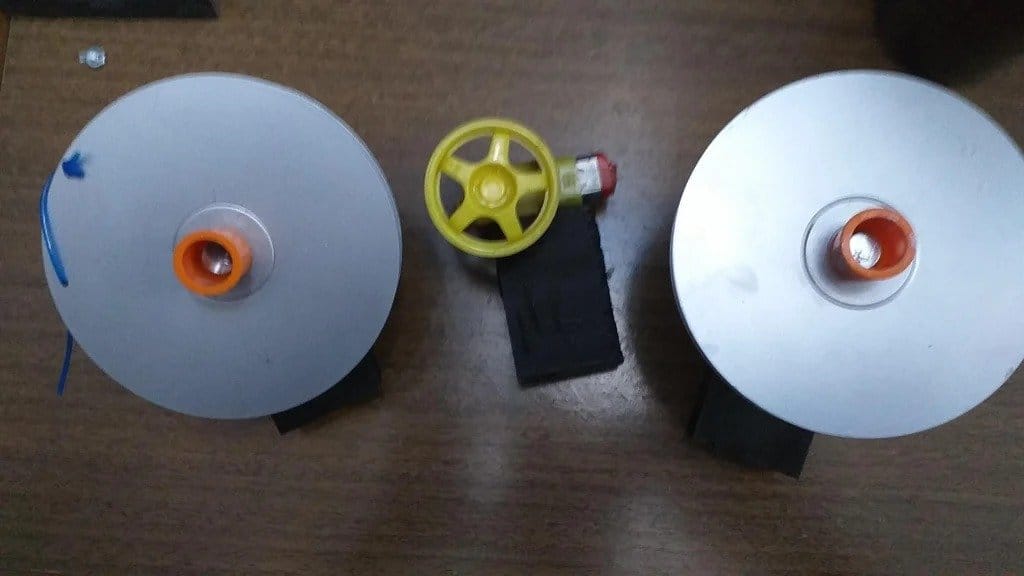 Finally, everything is assembled. 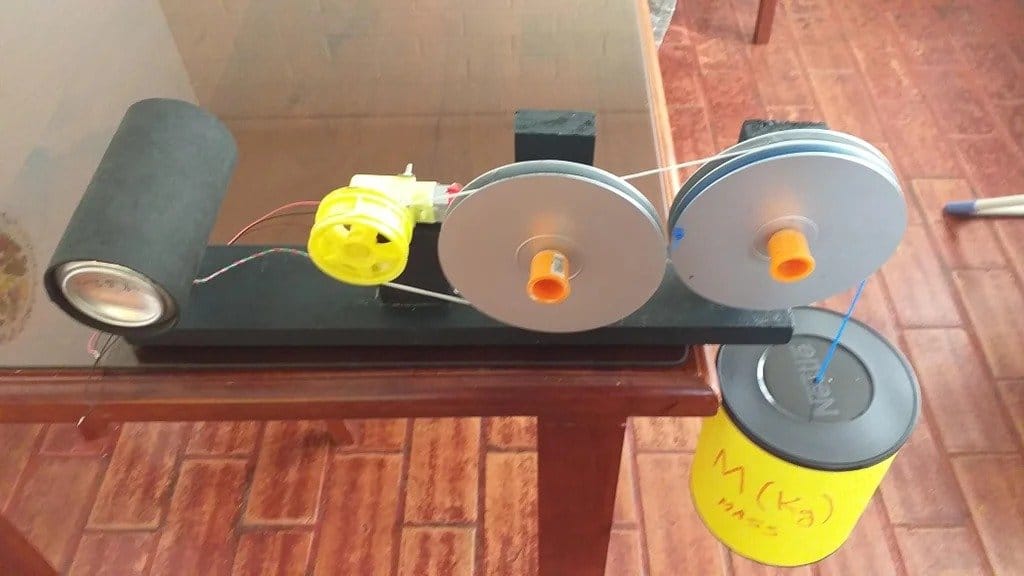 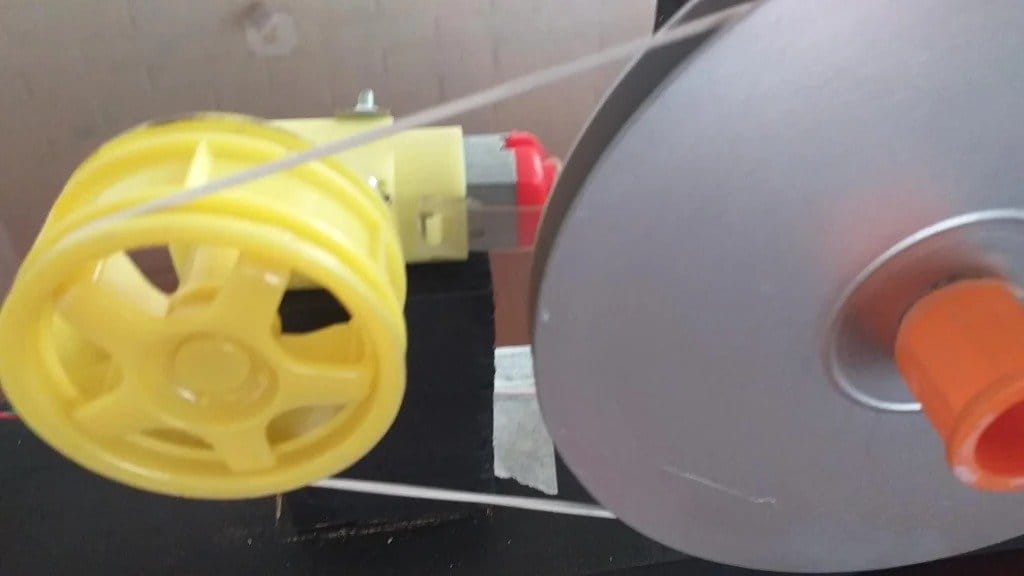 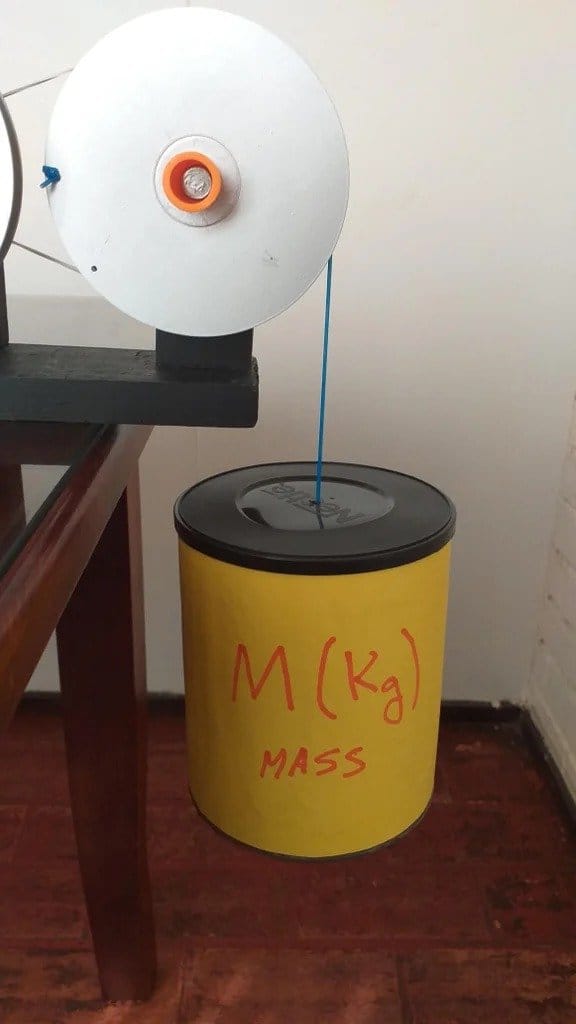 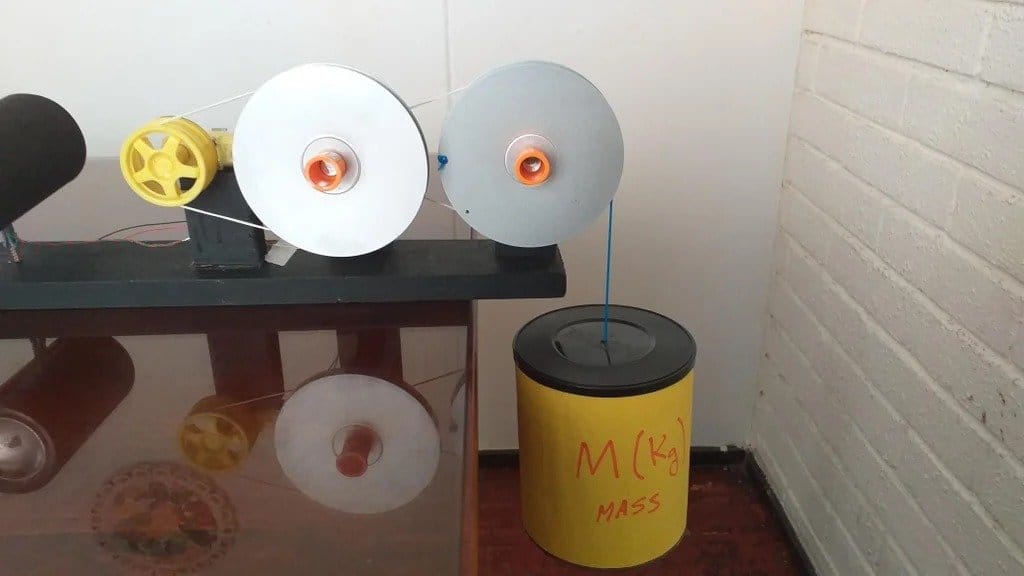 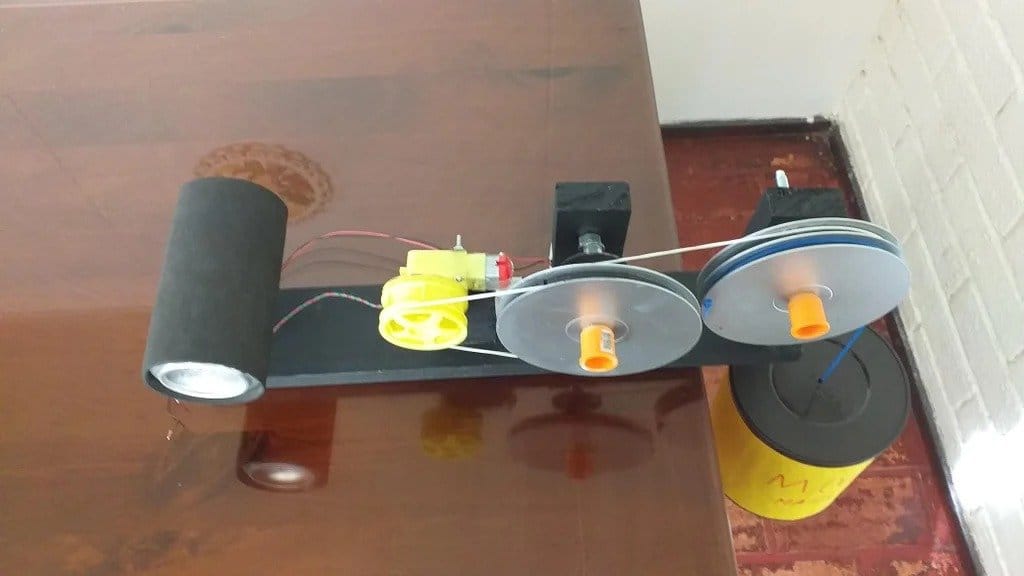 Step three : electrician
To test the system, I used the circuit shown in the figure.
This is a very simple scheme. When switch S1 is in position “1”:
the power supply supplies the motor with a voltage “V”, which drives the belt pulley system, causing the mass m to rise to a height h.
When the switch is in position “2” and the mass begins to fall due to gravity: < The belt pulley system is activated, but in the opposite direction, causing the motor shaft to rotate and the motor now acts as a generator.
The electric power generated by the engine (generator) feeds the LED until the mass m touches the ground (h = 0)
Of course, the idea itself is not new, but interesting in relation to solar energy. True, one question arises, and perhaps the key question, where to get the “height” to which the device should be installed?
Obviously, in urban conditions this is ineffective, but in rural areas there are simply no such high-rise buildings.
But now it is no longer for the master , and the thought came to my mind, what if instead of the system engine – pulley – belt – pulley – load, use a spiral spring. Then the engine could directly turn the axle on which the spring is installed and thus “wind” it according to the principle of the spring on the old grandmother's alarm clock. Accordingly, at night, the spring begins to unwind and turn the engine.

Carrying lamp in the style of “torch”))