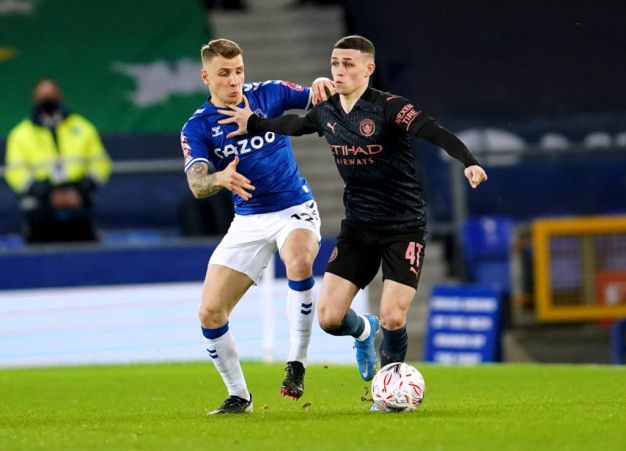 Late goals from Ilkay Gundogan and Kevin De Bruyne kept Manchester City’s bid for a quadruple on track as Everton’s defensive resilience was eventually broken in their FA Cup quarter-final at Goodison Park.

Germany international Gundogan made the crucial breakthrough with his third goal in as many games in the 84th minute, before substitute De Bruyne ended any hopes the home side had of forcing extra time by making it 2-0.

It was harsh on Everton, who had followed manager Carlo Ancelotti’s game plan to the letter, as their dreams of a first trophy since 1995 were extinguished.

The result leaves City effectively seven wins away from a quadruple, not that manager Pep Guardiola will even consider that at this point.

He will have been pleased, however, with how his side stuck to their task in the face of opponents well-drilled in an Italian defensive masterclass.

In the last round, on this ground, Everton won a nine-goal thriller against Tottenham, but there was no chance of lightning striking twice.

Perhaps understandably Ancelotti opted for a back five but surprisingly left out arguably his best defender, Michael Keane, to give Yerry Mina his first appearance in almost five weeks after injury.

The Colombia international did not let him down, throwing everything he had at every shot or cross in his vicinity, while the relentless Allan led by example in midfield.

Everton’s tactics, which gifted the vast amount of possession to their opponents, was absolutely dependent on them not conceding the first goal and they had a minor scare when Mason Holgate left a leg dangling as Phil Foden tried to skip past him, but the slightest of touches from the defender proved enough.

Somewhat criminally facing a 21-year-old goalkeeper making only his second start, City did not test Joao Virginia until the 18th minute and even then the shot from Raheem Sterling – back in the side after being left out for the last three – was weak.

Richarlison hooked a shot over before the hosts’ best, and probably only, passing move saw Gylfi Sigurdsson slide through a pass for Dominic Calvert-Lewin, only for Zack Steffen to get there first and the half ended with Mina’s flicked header being nodded away by Oleksandr Zinchenko.

In the second half, Virginia denied Sterling from Fernandinho’s cut-back but the unmarked City forward should really not have given the goalkeeper a chance.

Foden drove just wide, but Everton were doing a better job in the second half of turning City around until De Bruyne arrived with 10 minutes remaining to help secure a 25th victory in 26 matches.