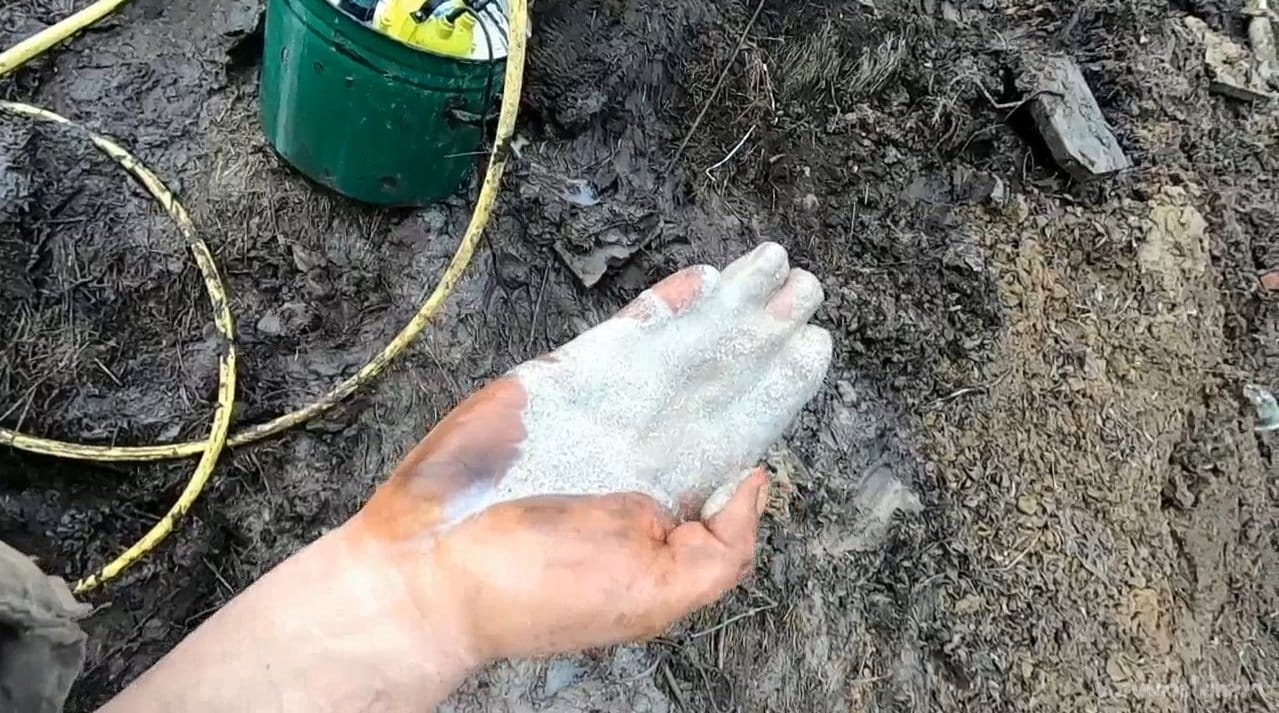 Hello everyone, I will share a detailed experience of drilling a fairly deep well into limestone with my own hands. The components were asked to “just work”, to drill one well for themselves once, not for professional drilling. And I will start a long story with the most interesting, with drilling operations.
Getting Started
The place for drilling was chosen – a lowland, almost a swampy area, only two meters below the level there is already water in the stream
We worked together, it is very hard to do the work alone, you have to carry water, put the barbells and so on.
So, we drilled three meters, and a terrible absorption of water began, a bucket of water flew away in 20 seconds, I did not have time to run to fetch water into the well. Most likely, we got into the water/quicksand, it is a mixture of clay and coarse sand, the water in this horizon is dirty. 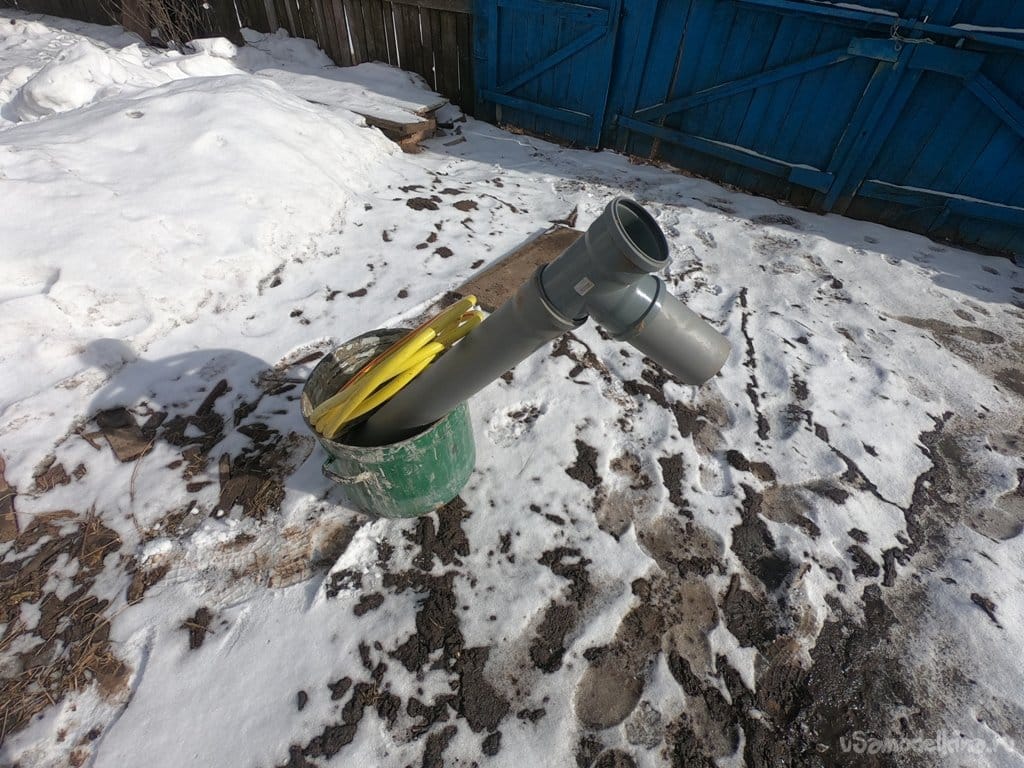 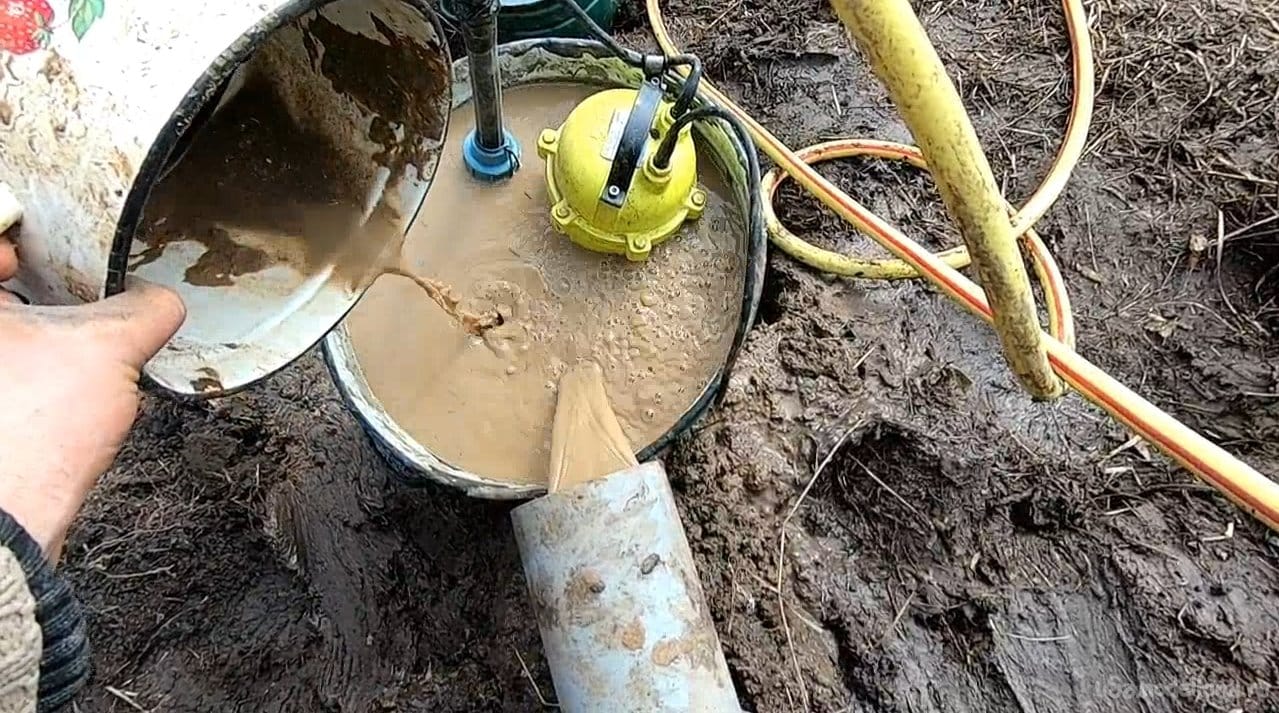 After a while, the water stopped circulating in a circle, it left and went endlessly into the ground. It was one of the most difficult periods of drilling, as we had to carry a lot of water and the drilling proceeded slowly.
At about 9 meters, the absorption of water stopped, most likely, the drilling shaft was covered with clay. Yes, I know, they usually use special drilling compounds, but I did not think that it would be needed on clay.
Further, at 15-18 meters, we entered fine yellow, and then gray sand. The absorption on it was very weak, so we decided to go further. From about 20 meters we entered some kind of gray rock, the Internet suggested that it was gray/black clay or bentonite.
Water carrier!
A few meters later we went into the lime, white crumbs began to appear at the exit, and the water turned white, and over time it became like milk. Periodically, we changed the water in the pan, it became too “thick” from lime.
Further, 28 meters of lime drilling (in total, we went into it already 6 meters), water absorption began. The water left about a bucket per minute, I concluded that we entered the aquifer, this horizon is called “water-saturated limestone”.
So, the absorption of water can be both weak and strong, and vice versa, it can be self-flowing. So it’s important not to miss the moment and understand what’s going on. Our absorption was relatively small because the static level is only 3 meters underground. When the pump was turned off, the water from the pan flowed down the bar by gravity into the well. 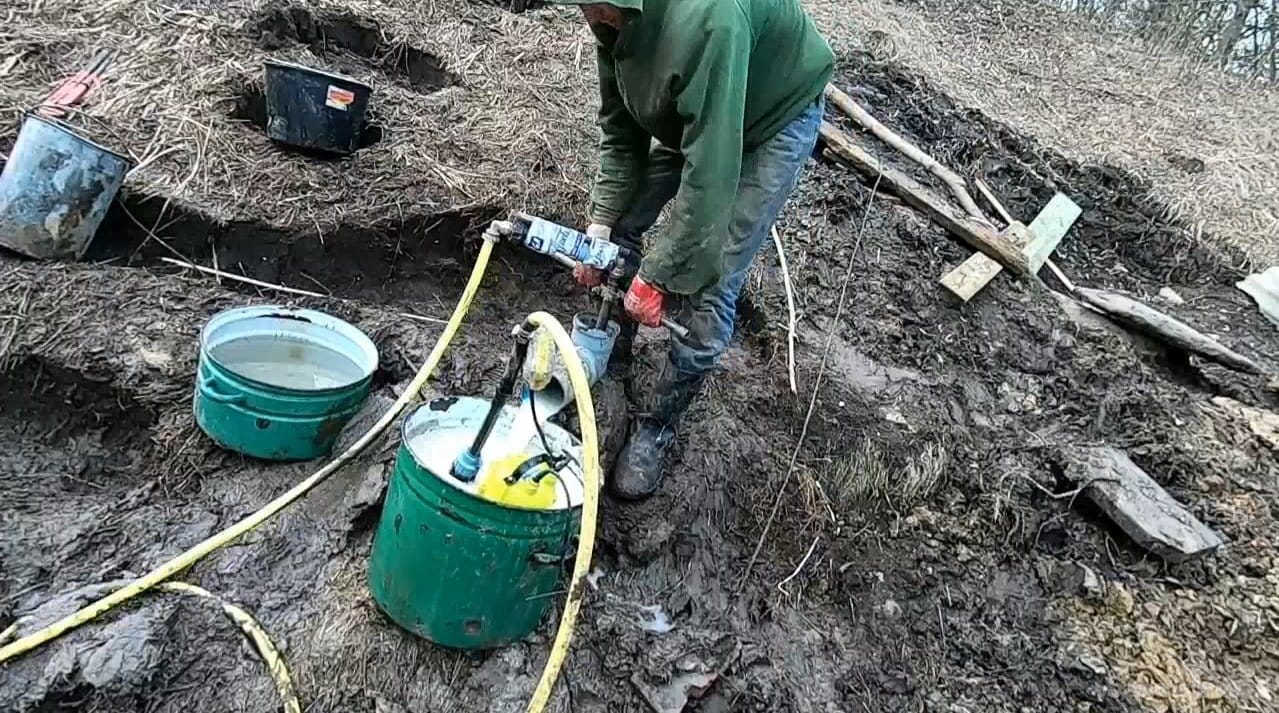 How the limestone was drilled
Lime was drilled hard, it is very viscous, it did not give in by simple twisting of a drill. We pounded the lime, raised the drill, and then, under its own weight, it flew down and deepened so much.
As a result, we drilled a well at 33 sacred meters, the absorption of water remained the same, about a bucket per minute, and here we landed.
In the limestone, there was something like pebbles/fossils, the drill sometimes stalled, sometimes it went a little easier.
Often, when drilling lime, the water stopped circulating, you had to lift the drill so that the tip was washed.
Yes, the tip clogged twice, once after a daily stand-by of the drill (it was hammered by 15 centimeters with sand). Pulled out and cleaned. And once again it got hammered in lime, but after tapping on the pipe, the cork flew out.
In such cases, the pipe can be blown out with either a more powerful pump or cleaned with a long steel wire.
Discussed
I used LDPE 32 as a casing, drilled about 5 meters of pipe as a filter, and sealed the end of the pipe. A mesh filter for lime is not needed, this is already a solid rock.
The pipe went in very easily so that clay and sand would not fall from above, screwed an impromptu oil seal with tape. Then this pipe will grow in a circle with clay and everything will be hermetically sealed.
At the moment, the well is swinging, the debit has grown from the initial 10 to 15 liters/minute, the water is still muddy, with lime. At first, a lot of sand and clay was washed out, now this is not observed. The static level is located 3 meters underground, the water does not end, it took about 7 hours of swing at the time of this writing. 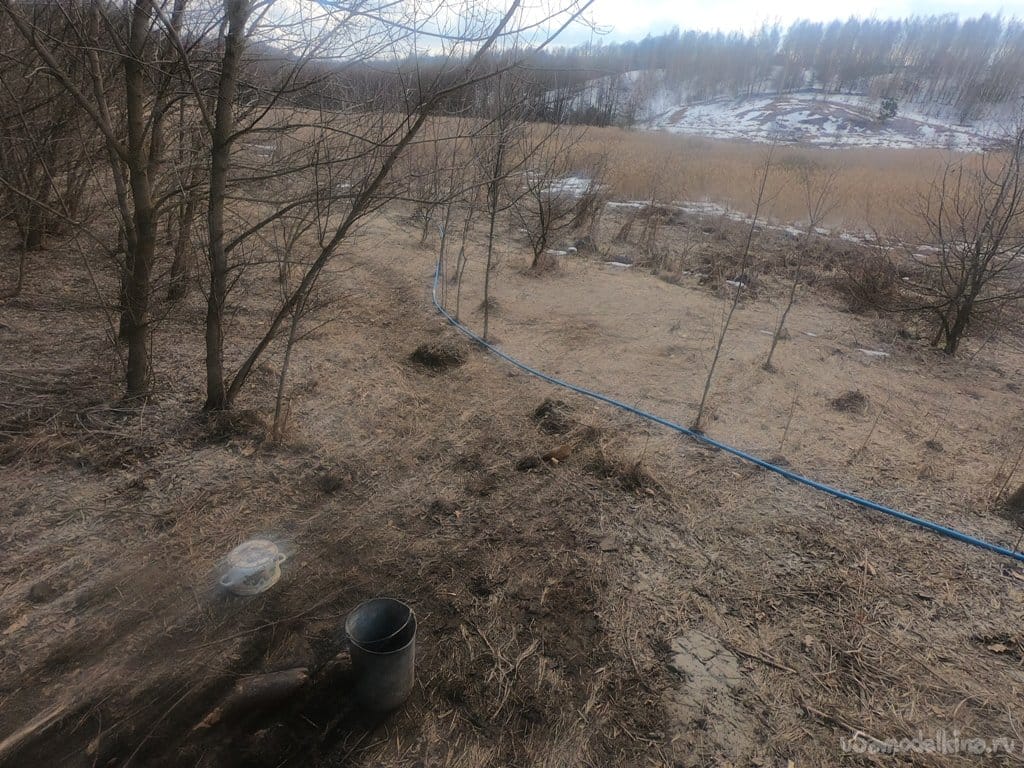 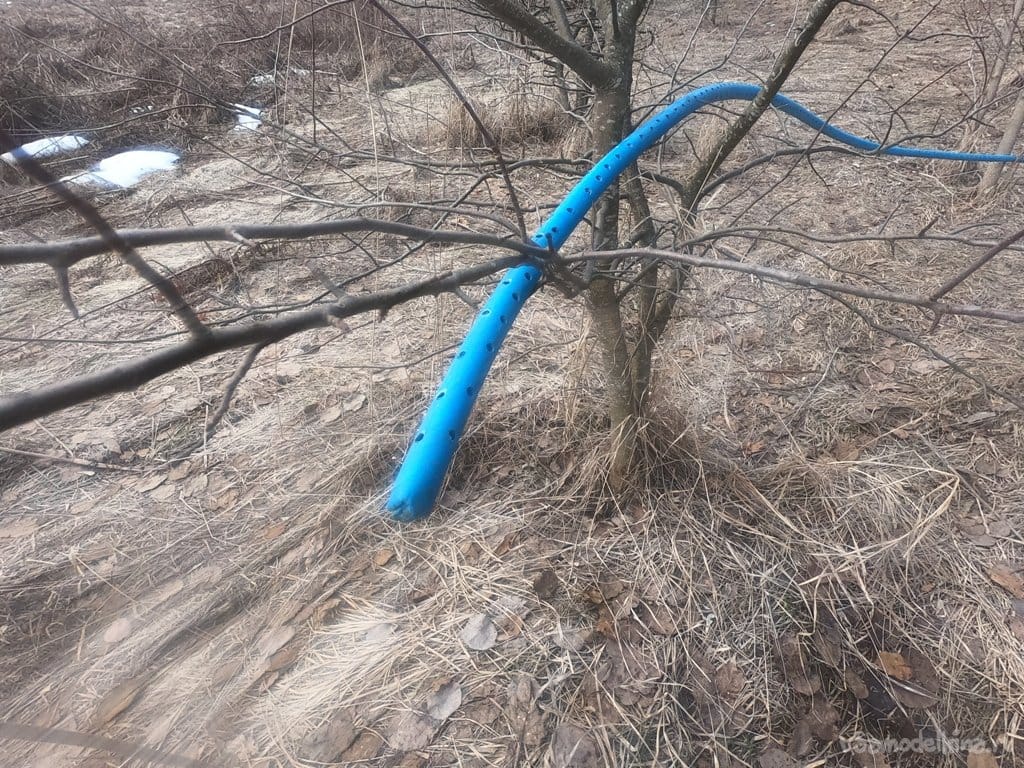 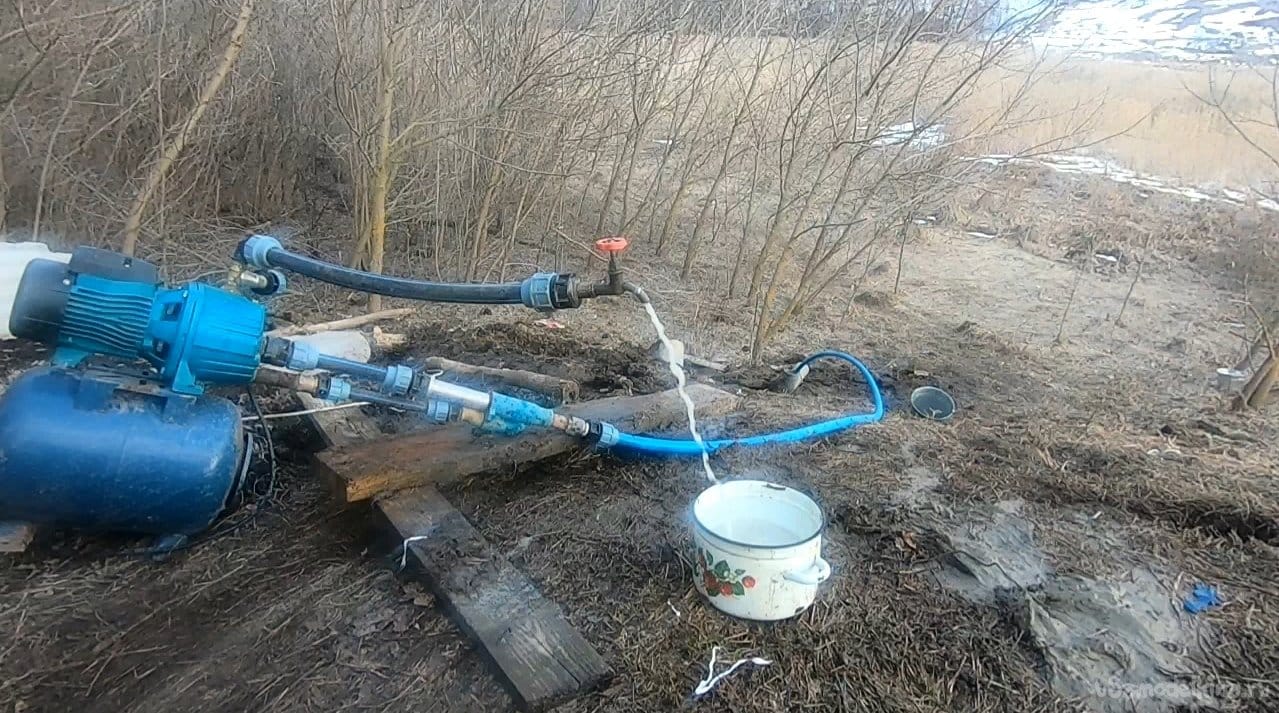 How I assembled the drill!
Materials and tools:
Materials:
– pipe DN20 (rods 3 meters each!);
– welded thread DN25 and couplings for 25;
– a piece of steel plate for a knife (go and “raw”);
– pipe, studs, nuts, etc. (for the handle);
– garden hose du20 5 meters (not less);
– fittings, piece pnd25, fitting, etc. (for “gander”);
– drainage pump (12mX400l/min, power 2kW);
– a piece of sewer pipe and a tee;
– LDPE or HDPE 32 (for casing);
– clamps, electrical tape, wire and of course scotch tape! 
Tools:
– grinder;
– welding inverter;
– hammer;
– drill;
– adjustable pipe wrench (and preferably two! ).
Manufacturing process:
Step one. Thread
We weld on the threads; on seamless pipes, a thread of 25 is put on with a minimum gap. But on the welded pipes, the thread came with a gap. Grabbed, rotated and then boiled. Be sure to clean the welds for slag holes and weld if found. For one pipe (two threads), I had about one electrode three.
I screwed the couplings onto one side of the tow and put a drop by welding so that there were fewer potential zones for unwinding. The threads were short (1.5 cm), but their length should ideally not be less than 2 cm! Shorter threads can break if used intensively! 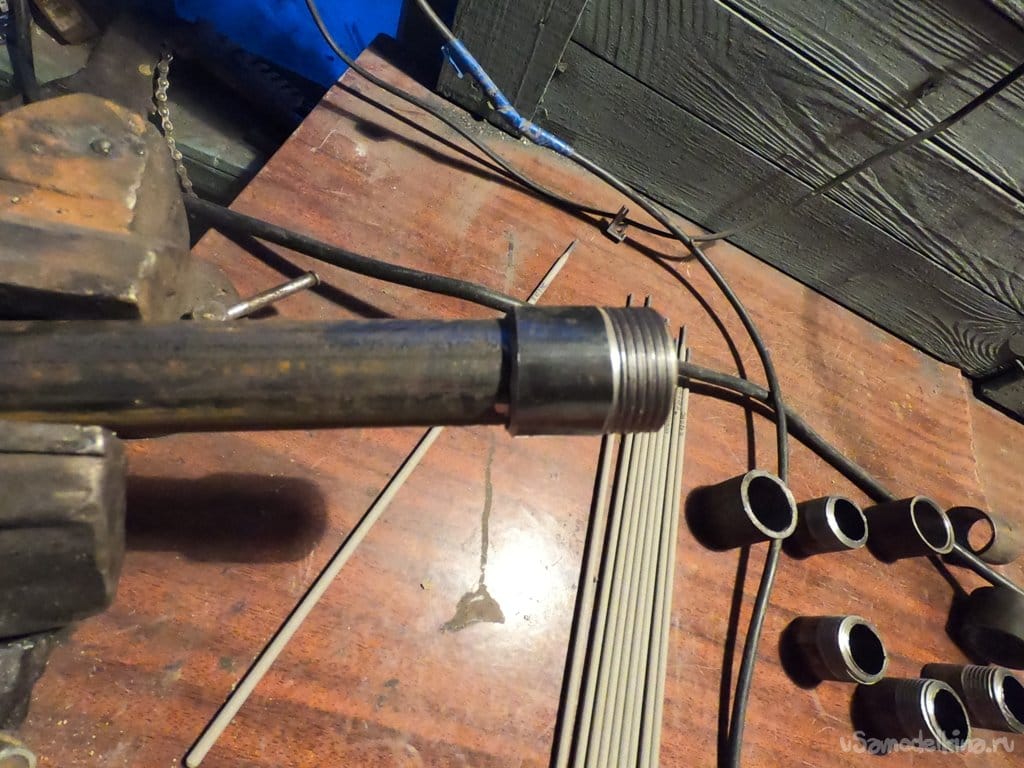 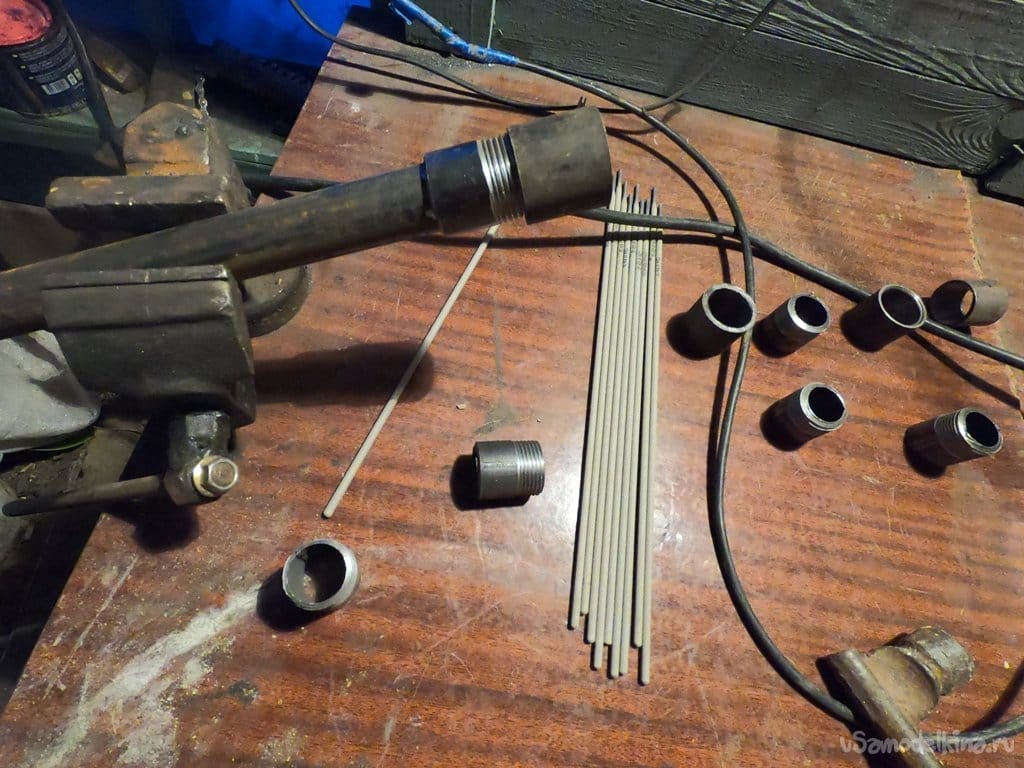 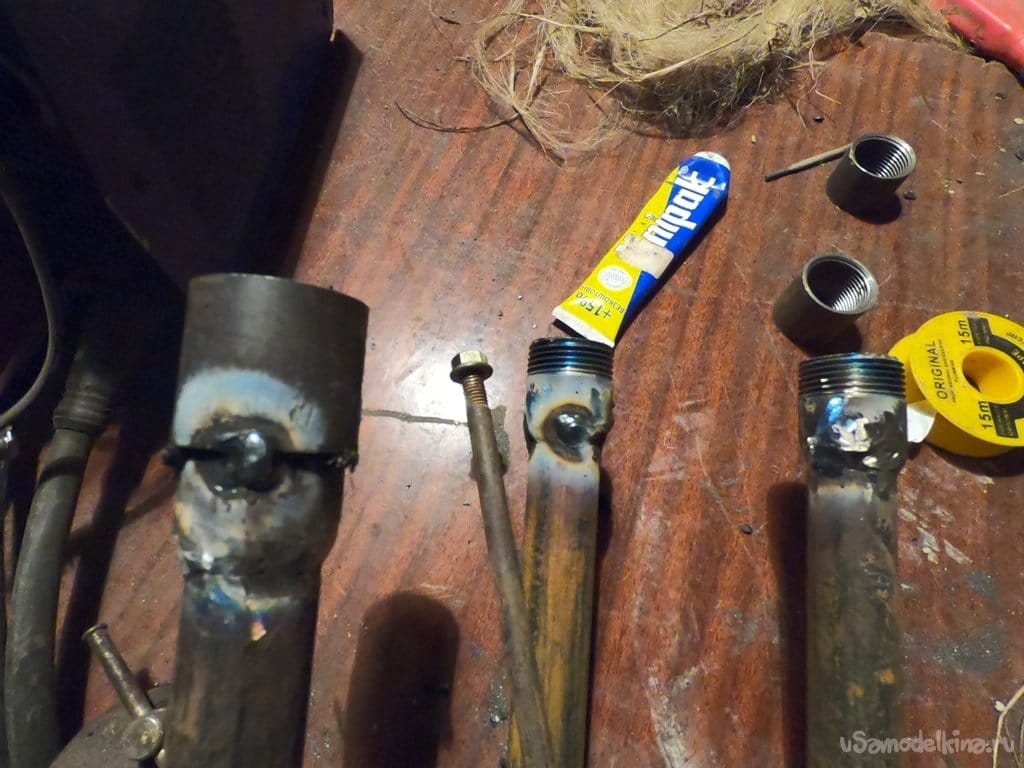 Step two. Tip
The tip was made of the most common triangular of thick raw steel. Sharpened on both sides in a “wedge”. The knife has shown itself perfectly, there is nothing special to be wise there!
We cut holes as much as possible, the stream of water should ideally wash the knife, the holes should be such that dirt, viscous clay and so on can easily fly out of them. Ideally, the end of the pipe should be completely open, then the pump will push the plug out in case of anything. 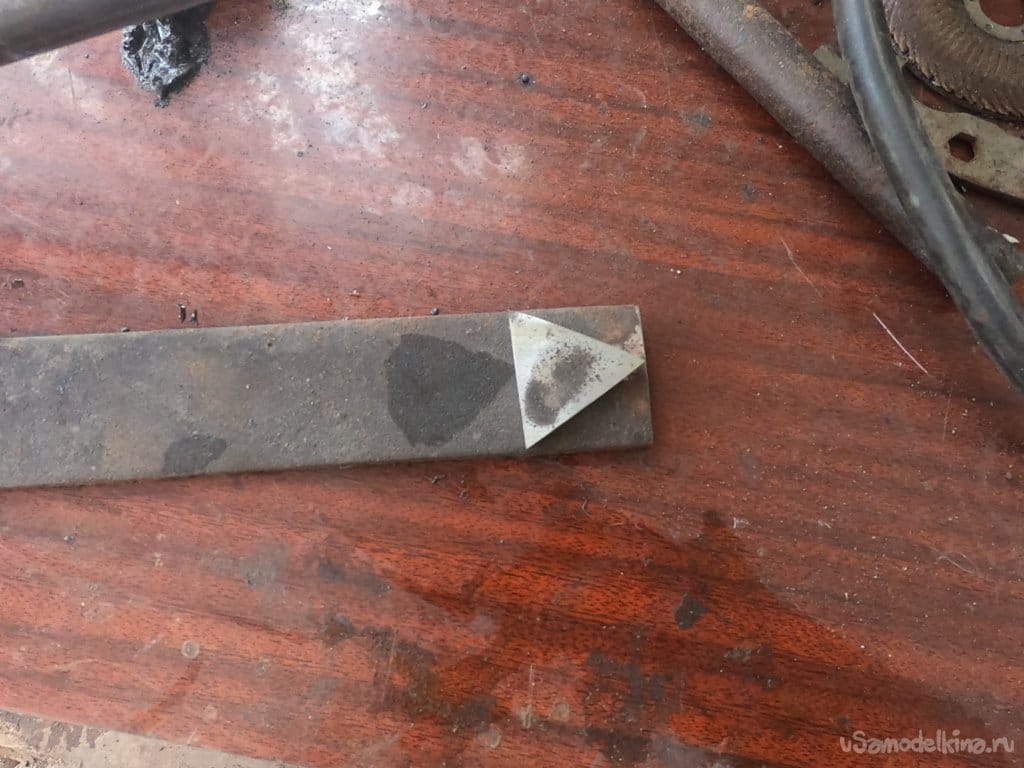 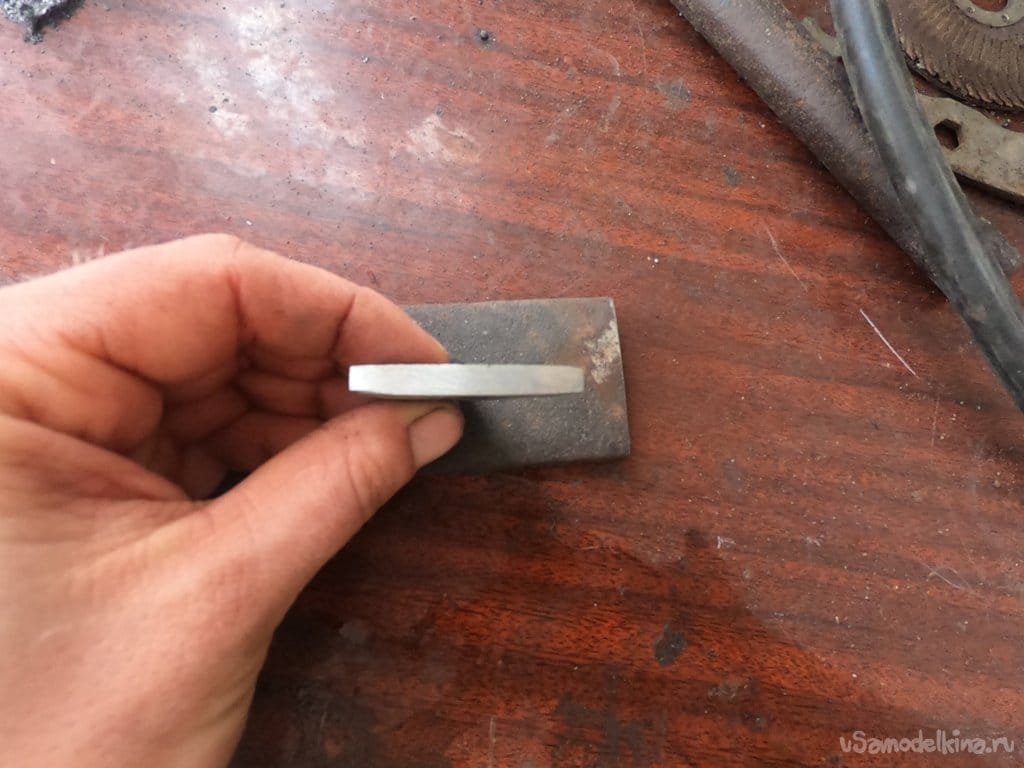 Step three. Gander
I collected the gander from all the plumbing junk that I found at home. This is an angle of 90 degrees for 25 threads, fittings for PND25 and a piece of PND25. To make the structure rigid, I screwed a piece of pipe with wire and tape. There were no problems with the gander!
Only the hose interfered, it sometimes bent, an unsuccessful option was chosen. Under the hose we install a suitable fitting not lower than DN20. Please note that the drainage pumps do not give out a lot of pressure, mine has only 1.2 bar, so all the holes through which water flows must be of the largest possible diameter (at least 20 mm), otherwise everything else loses its meaning. 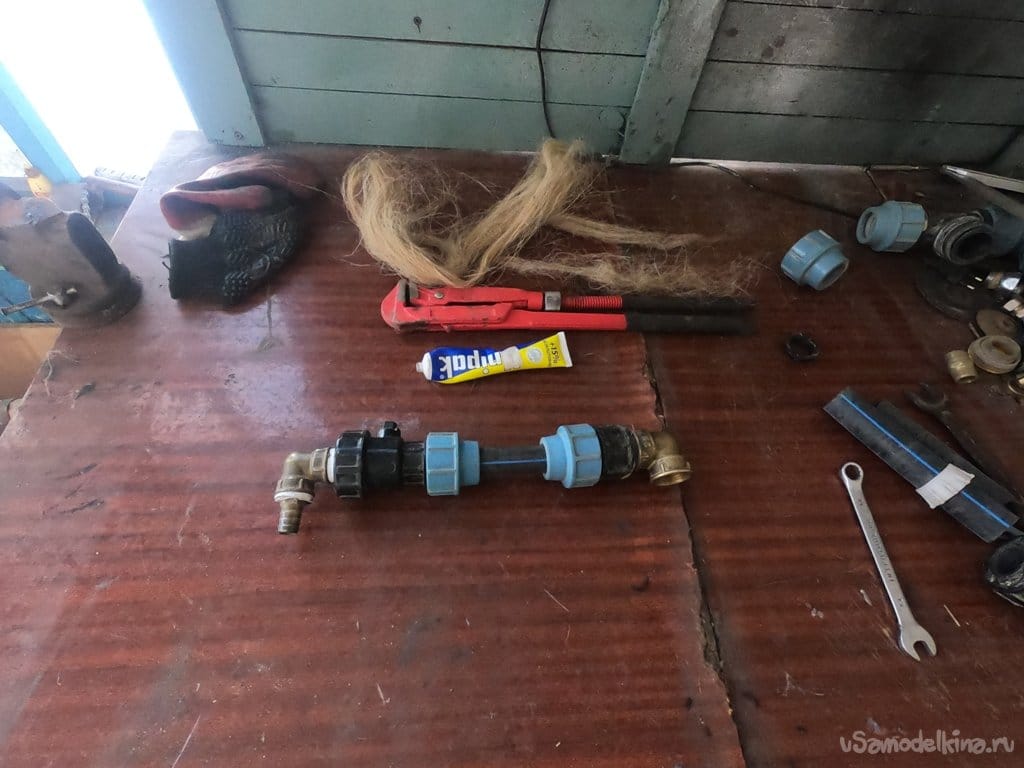 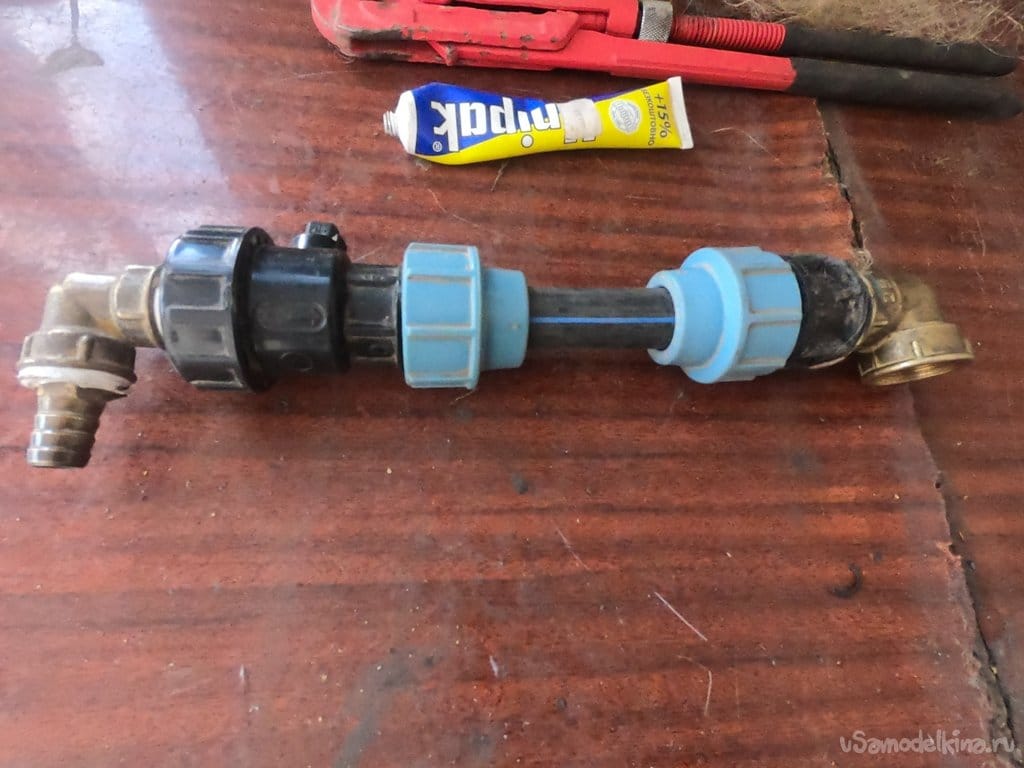 Step four. Handle
The design of the handle can be seen in the photo. The most important thing is that nothing bends, if the clamp is bent, then the studs bend, the thread breaks, etc. I have only M8 studs, however, they are made of normal steel. This was quite enough, the handle never failed, but we held on to it when we twisted the rods, when we hammered the lime, lifted it and so on. In the absence of a second adjustable wrench, the handle must be made as strong as possible so that you can hold the drill. 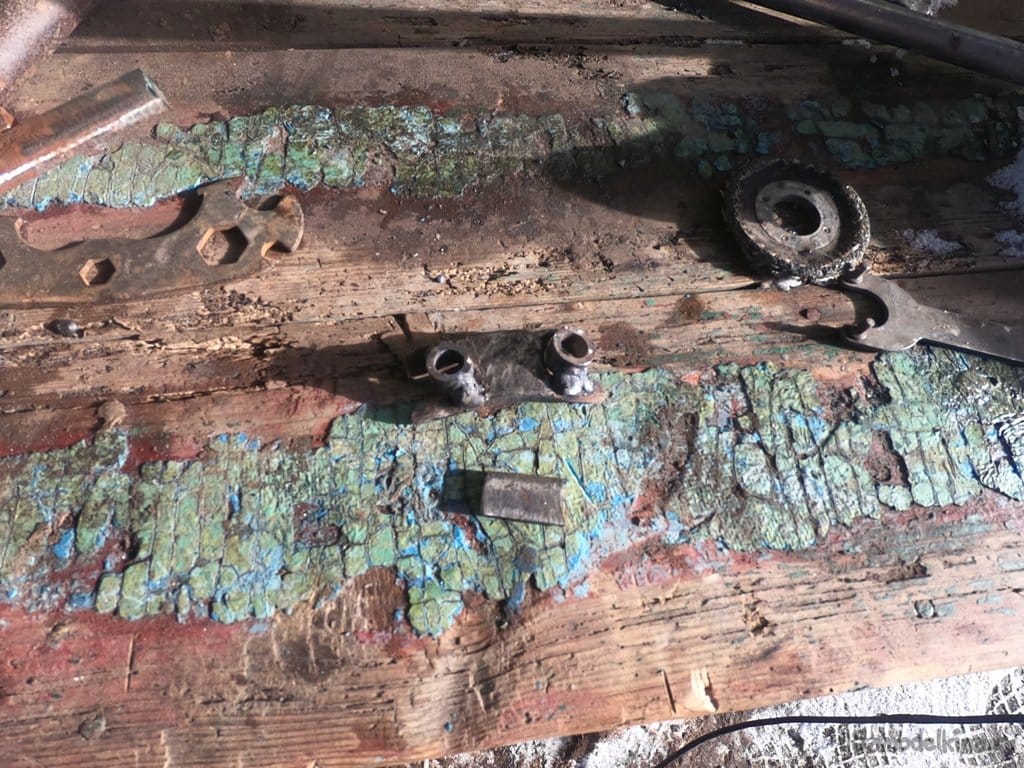 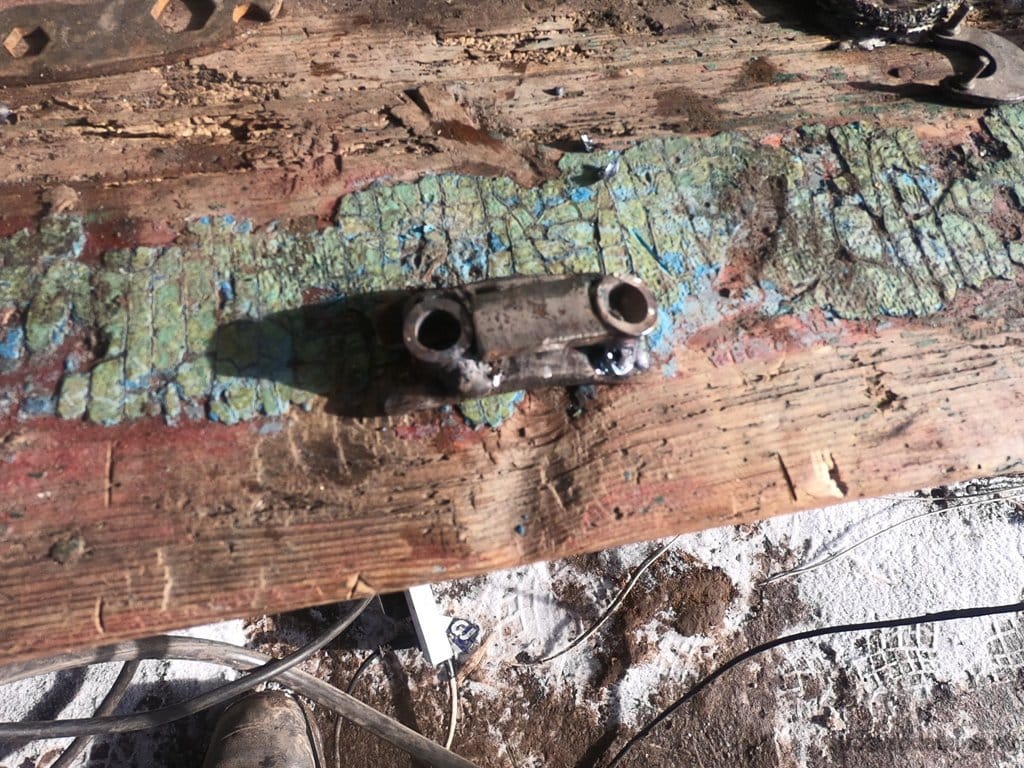 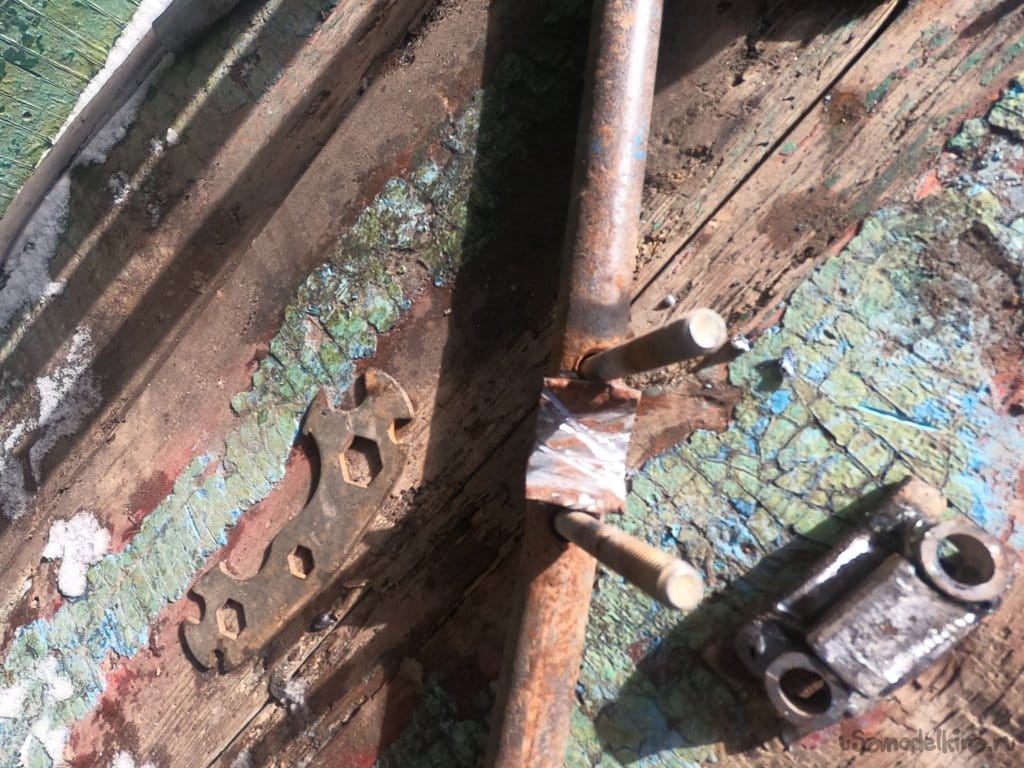 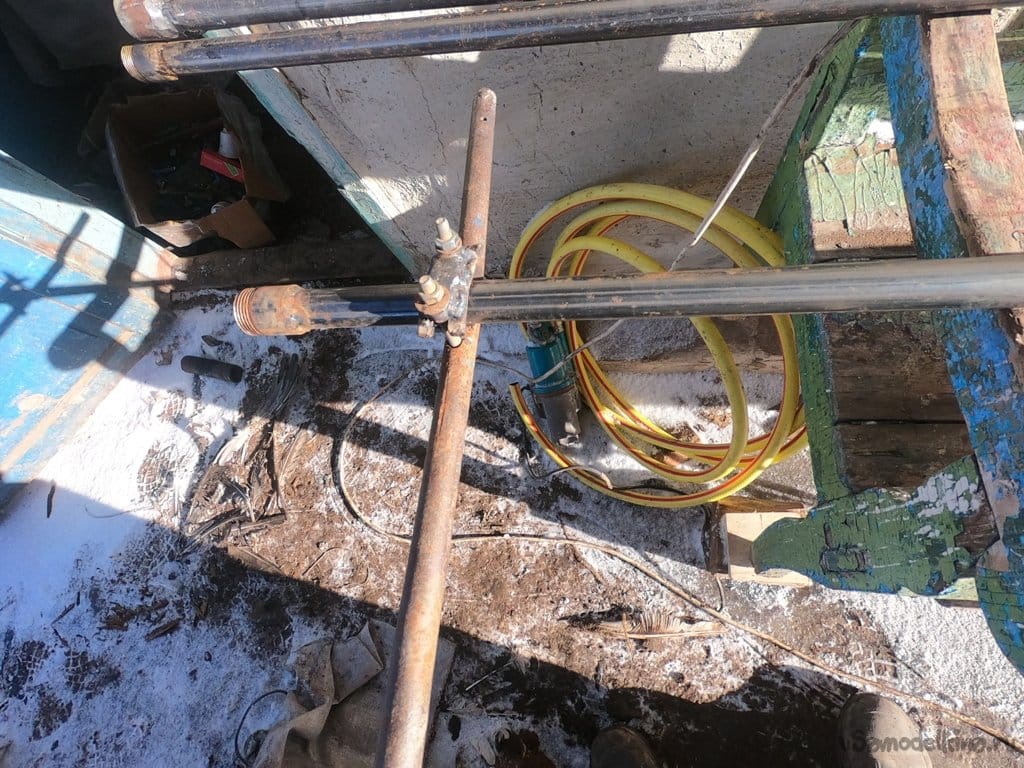 Step five. Pump
The pump was selected with a pressure of 12 meters (1.2 bar), a pump of 8 meters, probably, would not have coped with this task due to the small diameter of the pipes. So the smaller the diameter, the more pressure the pump should have. At first I tried to work with a “stream”, but it turned out to have very little power (or maybe he was just tired).
I stuffed the fitting under the PND25 into the pump pipe (2 inches), wrapped it with electrical tape and wire, nothing vomited. Well, then PND25 and into it a hose for 20, electrical tape and clamps. 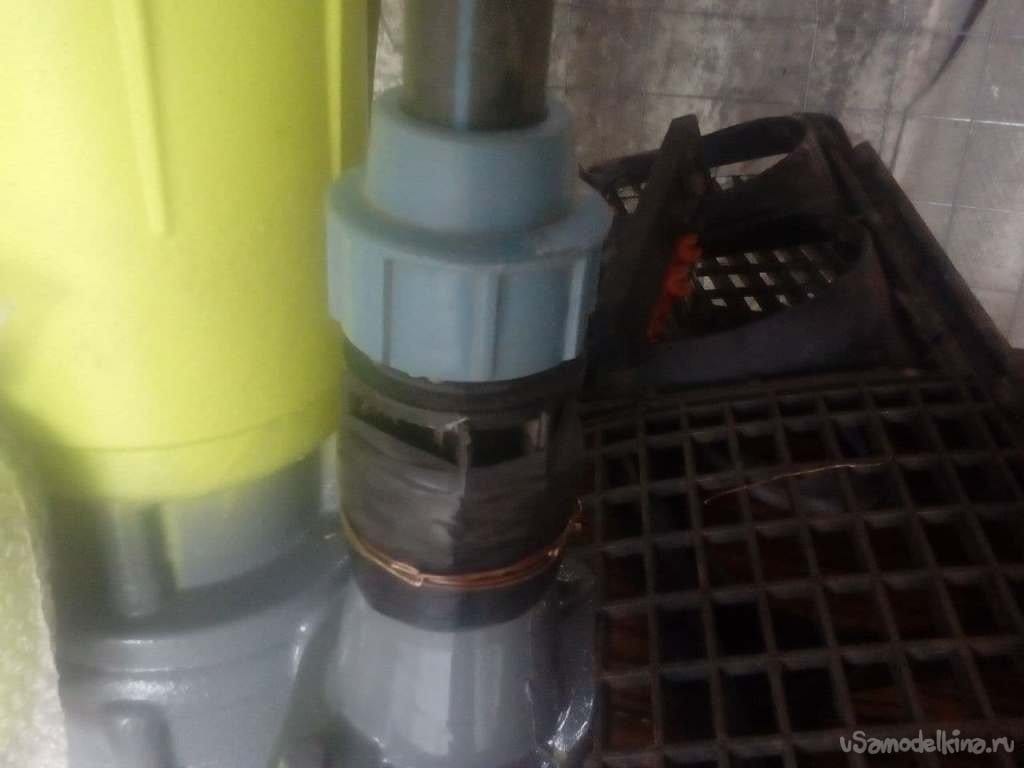 That's all, the projectile is ready. You can watch the video in more detail about the work process, the result is excellent! The main thing is not to lose the rods in the well!)) We tightened all threads ONLY on tow with sealing grease! In principle, it held tight. Once, however, the thread was untwisted, the shaft moved easily, but then it somehow tightened itself there. It is important to press the drill while rotating to the right, so that the thread twists and vice versa to raise it when rotating to the left.
Also, before installing a new rod, it is important not to forget to fasten the gander, otherwise you will not be able to jump 3 meters)) They forgot a couple of times, swore, but what do) That's all I forgot, ask, I'll tell you.