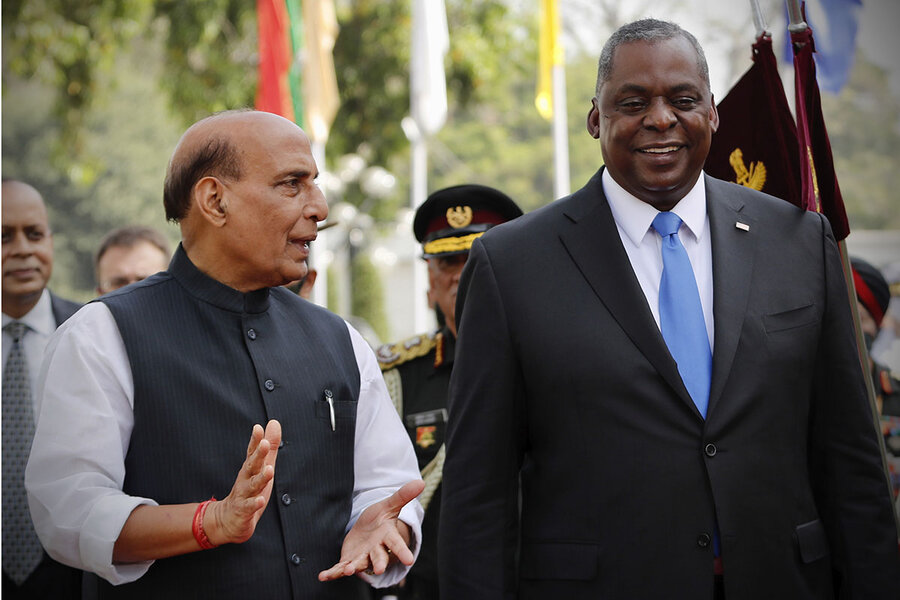 Top defense officials from India and the United States pledged Saturday to expand their military engagement, underscoring the strengthening defense ties between two countries concerned over China’s growing influence in the Indo-Pacific region.

“India is an increasingly important partner in rapidly shifting international dynamics. I reaffirm our commitment to a comprehensive forward-looking defense partnership with India as a central pillar of our approach to the Indo-Pacific region,” Mr. Austin said.

Mr. Austin is making the first visit to India by a top member of President Joe Biden’s administration. His visit follows a meeting last week between leaders of Australia, India, Japan, and the U.S., which together make up the four Indo-Pacific nations known as the Quad.

The Quad is seen as a counterweight to China, who critics say is flexing its military muscle in the South China Sea, East China Sea, Taiwan Strait, and along its northern border with India.

China has called the Quad an attempt to contain its ambitions.

“We are determined to realize the full potential of comprehensive global strategic partnership,” Mr. Singh said.

According to a statement from the Prime Minister’s Office, Mr. Modi “outlined his vision for the strategic partnership between the two countries and emphasized the important role of bilateral defense cooperation in India-U.S. ties.”

Before the talks on Saturday, Mr. Austin visited the National War Memorial and was accorded a ceremonial guard of honor.

The timing of Mr. Austin’s visit, which follows talks between high-ranking U.S. and Chinese officials in Alaska amid a bitter exchange of words, signals the importance Mr. Biden places on New Delhi as a security ally.

The U.S. and India have steadily ramped up their military relationship in recent years and signed a string of defense deals and deepened military cooperation. In 2019, the two sides concluded defense deals worth over $3 billion. Bilateral defense trade increased from near zero in 2008 to $15 billion in 2019.

The U.S.-India security partnership enjoys strong bipartisan support in Washington, and it has grown significantly since the early 2000s even though trade agreements have been a sticking point. But in recent years, relations between the countries have been driven by a convergence of interests to counter China.

More recently, India drew closer to the U.S. following its months-long military standoff with China along their disputed border in eastern Ladakh, where deadly clashes erupted last year. Tensions between the nuclear-armed Asian giants have eased after the two countries pulled back troops from one area of contention.

The military tensions between the two neighbors at that time had stoked fears of a larger confrontation.

Mr. Austin in a separate press briefing said the U.S. “never considered that India and China were on the threshold of war.”