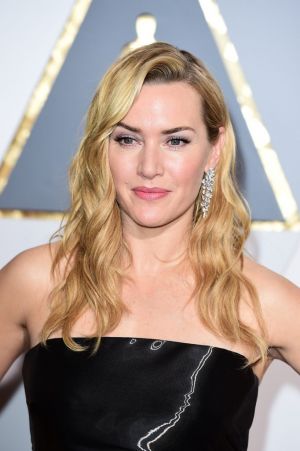 Like all of us, Kate Winslet is hiding a multitude of sins out of shot of her Zoom camera. “I tried to make it look nice but you have no idea what is going on around here,” she confides with a laugh. “There are blankets, there is a table tennis table here that has got a blanket draped over it, and a Peloton bike over there and a manky old chair I keep trying to get rid of. It’s really quite hilarious, the makeshift nature of all of this.”

But for all the struggles of making both herself and her home fit for public consumption, the Oscar-winning actress, 45, says the past year has given her some serious pause for thought about the way she works in future, not just in terms of efficiency, but also from an environmental point of view. “I’m a fan on Zoom and Microsoft Teams though, I just think they are incredible.

“I had a massive script meeting last night with about eight people and we got so much done and you think of all the airfares you are saving and the tonnes of CO2 we are not dumping into the environment, it’s just amazing really that we are able to do it this way.”

Winslet says she is “hyper-conscious” of how much she was flying before, adding: “For me definitely that side of it has got to change, just personally inside of myself, it has changed.

“I hope that what I’m able to do, and with any luck I think distribution companies and film companies will understand, when actors turn around to them and say, ‘OK listen, we are only going to do five long haul flights this year or six long haul flights, and flying to New York City to do one talk show, that just can’t be one of my round trips, can we do it by Zoom?’

“I’ve done many live talk shows by Zoom this year already and it works just fine, it’s just the same.” She pauses. “And I 100% still had my slippers on!”

Winslet has spent lockdown in her UK home, which is close enough to the coast for a spot of beach-combing. It has become an almost obsessive pursuit following her latest film role in Ammonite, as the real-life self-taught palaeontologist and fossilist Mary Anning.

While the film is not strictly a biopic, and Anning’s own romantic interests are lost to history, the film tells the story of a same-sex romance with a young woman, played by Saoirse Ronan. While Anning’s discoveries were crucial in shaping our understanding of prehistoric life, Victorian societal norms meant she was never accepted into the elite scientific community and many people will still not be familiar with her name.

Winslet said she had heard of Anning before she took the role, but had no idea about the extent of her work. “I didn’t know that she found her first ichthyosaur when she was 11 years old and I had no idea how significant her scientific discoveries were on the world of geology, so it was quite an education.

“I’m still by no means an expert, but I was able to work with a palaeontologist and really learn those skills and was able to find a few fossils of my own.”

Winslet says it is now “impossible” to walk down a beach without scouring it for hidden fossils and she is not alone in her new interest. “My friends will also ring me up now and say, ‘We found something on the beach today and we wondered if you might be able to tell us if it’s anything?’ and I’m like, ‘No, it’s just a dent, sorry.’

“But I constantly scour and Paddy Howe (a geologist at Lyme Regis Museum), who was my instructor when we were working, said you will not go onto a beach ever again without scouring and looking down the whole time, even paths, country lanes, you will still find yourself thinking you are going to find something wedged into the cement, but that is very much something I do all the time now.”

"I don't want to go back to the life I had before you." #Ammonite pic.twitter.com/mciBuInEqS

As well as bringing Anning to the masses, Winslet, the star of films including Titanic, The Holiday and Eternal Sunshine Of The Spotless Mind, said she also wants to see more same-sex love stories in mainstream cinema. “It’s really interesting, if there were more we wouldn’t feel so automatically compelled to compare the few that do exist.

“So for me one of the most powerful things that I’ve taken away from Ammonite was that in our love story, we tell the tale of two women, two people, who fall in love. The fact they are of the same sex is never mentioned or addressed in any way that shrouds it in any degree of secrecy or hesitation or fear, and for me, I hope that we are able to move more in that direction.

“When we tell same sex love stories on film so often there is this element of this shame or something is forbidden and therefore wrong, and just by telling these stories and normalising them it hopefully helps with the evolution and progression of how audiences view LGBTQ people and their relationships.

“I for one really hope we do find more LGBTQ films just making their way into the mainstream because I just don’t understand why they aren’t there.”

Winslet and Ronan worked closely with director Francis Lee on the film’s beautifully rendered love scenes and Winslet said they were adamant they “didn’t want to hide behind corsets”. “We didn’t want to be timid,” she adds, “just because this was a period setting and so often intimacy in period films can be handled in perhaps a slightly more delicate way or something, and we just didn’t really feel that was necessary.

See Saoirse Ronan as Charlotte Murchison in the BAFTA-nominated #Ammonite. Available for premium rental at home on all digital platforms from March 26 in the UK. pic.twitter.com/jcqMPYeZ5j

“We wanted to really show the deep, passionate, loving, trusting connection between these two women, that had come as a result of quiet longing and real deep desire.

“It was really fantastic doing that love story together with Francis and Saoirse, there was a lot of trust in the room and also at the end of the day, women know what women want, so there was a shorthand that Saoirse and I had that taught me so much.

“I’m still learning how different it feels. I’ve played LGBTQ characters in the past or taken part in intimate scenes of an LGBTQ nature, but never to this extent, and I think we just wanted to really make it something that served the power of the love between Mary and Charlotte.”

Ammonite is available for premium rental at home on all digital platforms from March 26.

Eight of the best chocolate eggs for Easter