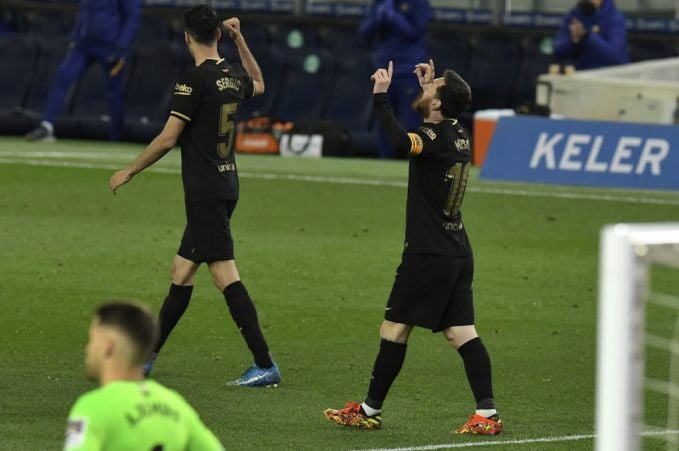 Lionel Messi celebrated his Barcelona appearance record with a brace against Real Sociedad on Sunday.

Messi equalled Xavi’s mark of 767 games for the Catalan giants in last Tuesday’s 4-1 win over Huesca – the pair played together on 403 occasions – and then went past him to 768 against Sociedad, scoring twice on each occasion.

Here, we take a statistical look at Messi’s impact on the club.

Messi has scored 663 goals for Barca, the most ever by a player for one club after he passed Pele’s record of 643 for Santos earlier this season.

He is comfortably LaLiga’s record goalscorer with 467 and is also second all-time in the Champions League, with 120 to his great rival Cristiano Ronaldo’s 134.

Messi has won Spain’s Pichichi trophy, for the league’s top scorer, on seven occasions and top-scored in the Champions League six times, including 2014-15 when he shared the honour with Ronaldo and Neymar.

He has scored Champions League goals in 16 seasons, matching Ryan Giggs’ record, and unlike the former Manchester United man he has done so in consecutive years dating back to 2005-06.

Messi’s 2011-12 season, when he scored 73 times in 60 games for Barca in all competitions, remains an astonishing high water mark.

He has passed 50 on five other occasions, with four more campaigns in the 40s and over 30 in every completed season since 2008-09 – a mark he is on the verge of repeating, with 29 in all competitions so far this term.

Messi has won 33 major trophies with Barca, when including domestic and European super cups and the Club World Cup in that definition.

They have won LaLiga in 10 of the 17 seasons since he broke into the first team, with six Copa del Rey triumphs and four domestic doubles along the way. Seven Supercopa wins boost Messi’s total to 23 honours in Spain – Barca have won eight in that time, but he did not play in the two-leg 2005 win over Real Betis.

He has added another 10 continental or inter-continental successes, with Barca winning the Champions League in 2006, 2009, 2011 and 2015 and adding both the UEFA Super Cup and Club World Cup after the latter three of those.

Messi has also won the Ballon d’Or, awarded to the world’s best player, on six occasions including four in succession from 2009 but his domestic successes are in stark contrast to his barren trophy cabinet with Argentina, which contains just an Olympic gold medal from 2008.

Messi has scored 48 hat-tricks for Barca, including 36 in LaLiga, with another six for Argentina taking him through the half-century mark for his career as a whole.

He has scored four goals on six separate occasions – in league games with Valencia, Espanyol, Osasuna and twice against Eibar, plus a Champions League win over Arsenal in 2010.

He also recorded one five-goal haul in Europe, against Bayer Leverkusen in the last 16 second leg in 2012 as Barca won 7-1 and 10-2 on aggregate.

Valencia have been on the receiving end of four of Messi’s hat-tricks, with three each against Atletico Madrid, Sevilla, Osasuna, Espanyol and Deportivo La Coruna.

He has also scored twice in a game on an additional 133 occasions with a record 95 of those coming in LaLiga, following his efforts over the last week.