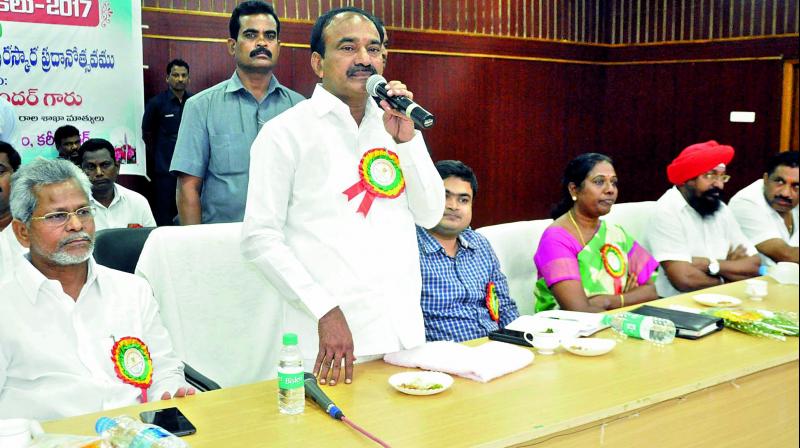 Karimnagar: Agriculture in the past was completely different compared to what farmers were doing today. Current-day farming situations require a lot of investment, said minister Etala Rajendar on Satudray. Even though farmers were getting good yields, they were unable to repay their debts as the cost of production has increased enormously.

He was speaking after inaugurating the Rythu Vedika at Medipally in Jammikunta mandal of Karimnagar district.

To reduce the burden on farmers, the TRS government had taken the initiative for construction of Rythu Vedikas. They will function as research centres and will be useful for the farmers.  After holding discussions in the Rythu Vedikas, farmers can cultivate crops which will give them better yield with less investment, Rajendar said.

He pointed out that the region was historically neglected in the past, and was dry. After the formation of Telangana state, 18 check dams had been constructed in the Huzurabad region which was now getting sufficient quantities of water for irrigation needs and had turned into a fertile area.

To prevent the canals from drying up, Chief Minister K. Chandrashekar Rao had allocated `5,000 crore in the Budget for the construction of check dams. The construction work on six check dams will be taken up soon from Huzurabad to Patarlapally village, he assured.

Saturday was also Rajendar’s birthday and TRS leaders and cadres marked the day by the cakes, conducting the Annadhanam programmes and distributing fruits to the children at orphanages in the undivided Karimnagar district area.