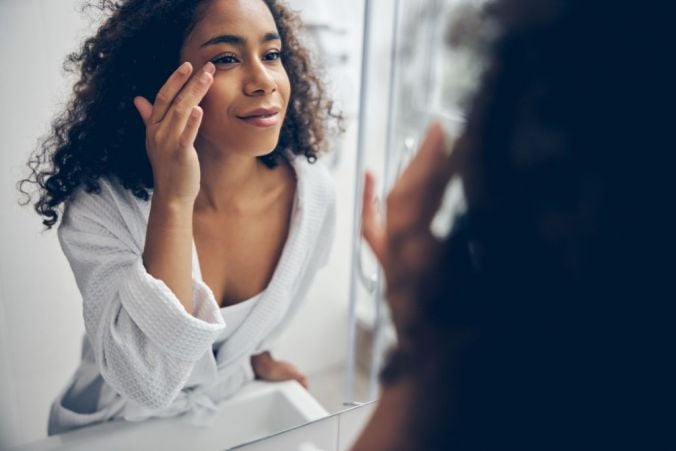 Wearing face coverings has led to people opting against lipstick and battling the dreaded 'maskne'.

A year since lockdown began, it’s fascinating to consider how different our lives are compared with this time 12 months ago.

And it’s not all bad news. When it comes to cosmetics, we’ve learned some valuable lessons about how to look after our skin and hair, and as much as we’re desperate to get back to the salon for a cut and colour, we’ll certainly be continuing with some of our DIY rituals in the post-lockdown world.

As face coverings became mandatory, adorning our lips became a waste of time, because who wants a smudged pout and a load of lippy smeared on the inside of your mask?

One positive of the pandemic is that many people who would previously not have left the house without a full face of make-up learned to embrace the bare-faced look while working from home, or opted for tinted moisturisers and BB creams instead of heavy foundation.

As lippie became obsolete, make-up mavens took the opportunity to emphasise their peepers instead and #maskmakeup started trending on Instagram.

With beauty salons closed for months and eyelash extensions off the menu, sales of falsies soared, with Penney’s reporting it sold nearly 800,000 pairs in the month after stores reopened in summer 2020.

One of the many benefits of working from home? It’s easier to disguise greasy hair on Zoom calls, which means we haven’t had to wash our locks as often. Saving time and leading to healthier hair, it’s a win-win.

6. Cutting down on heat styling

To counteract all that handwashing and sanitising, hand cream has become a pandemic essential in order to prevent flaky fingers and parched palms.

An unfortunate side effect of wearing face masks, ‘maskne’ outbreaks saw adults of all ages suffering with spots for the first time in years.

According to Boots, sales of medicated skincare have risen by 39 per cent since July 2020, which is when face coverings became mandatory in many public places.

As the weeks turned to months and salons remained shut, sales of box dye went through the roof.

While some people mastered the at-home approach (and realised they can save a fortune in future), hairdressers reported they had to fix many a DIY disaster when they reopened for business.

Clippers and scissors also flew off the shelves as kitchens and bathrooms throughout the land were transformed into makeshift hair salons.

If you were lucky, a quick trim at the hands of your partner, parent or housemate tidied up your overgrown tresses, but there were also plenty of home haircut disasters too.

After an extremely stressful year, one during which we’ve had to stare at our faces on video calls for countless hours, is it any wonder we’re worried about ageing?

Research from Boots found more than 55 per cent of women believe their skin has aged by up to five years during the pandemic, with sales of anti-ageing products up as shoppers try to erase their ‘lockdown lines’.

While make-up brands have struggled during the pandemic, skincare has been a huge hit, as consumers took advantage of having more time on their hands to indulge in things like double cleansing, sheet masks and multi-step routines.

Eight of the best chocolate eggs for Easter