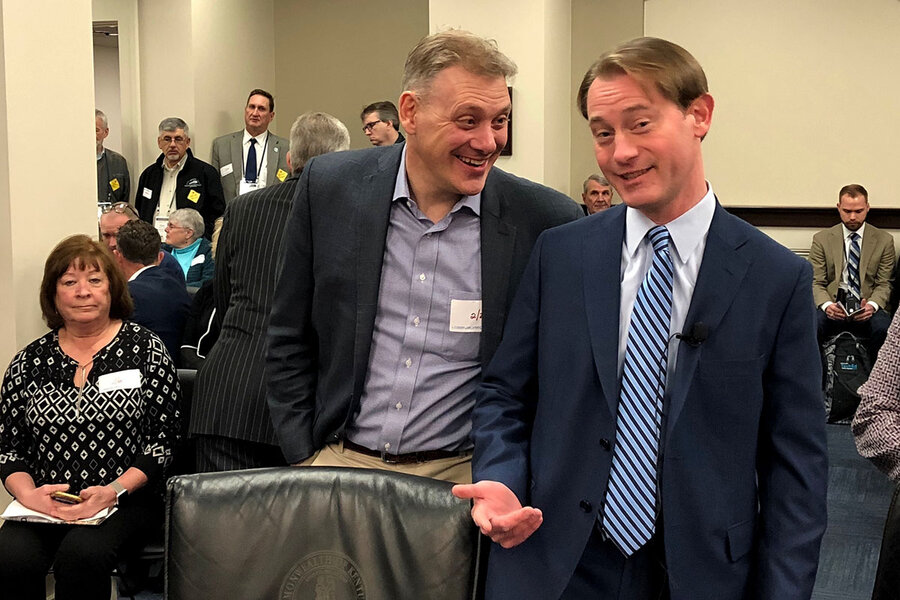 When Joshua Douglas wrote a book on how individual Americans are trying to expand voting rights as a way to help their communities, he didn’t expect a large Republican readership.

After all, Republicans have spent years trying to make it harder to cast a ballot at election time.

So when Michael Adams, Kentucky’s chief election official, called in 2019 to congratulate him on his new book, he wasn’t sure what to think. Then Mr. Adams, a Republican, asked him if he would join a statewide commission on voting procedures.

Democracy isn’t just about the right to vote, but about how election participation, in turn, impacts communities. Conservative Kentucky has found a bipartisan way to strengthen that right.

Would it be an opportunity, wondered Professor Douglas, to expand access for voters? Or would he be a pawn to make a package of new restrictions look more palatable?

Later that year, Mr. Adams was elected as Kentucky’s secretary of state and oversaw last November’s bare-knuckle ballot. Now its legislature is poised to enact an overhaul of the state’s voting law that threads the needle between the right to vote and the contested fight over how that right is exercised.

Its bill would expand early voting, including three days of in-person voting, and mandates a universal paper ballot, while adding an ID requirement and banning third-party collection of ballots. The bill has passed both Republican-controlled chambers and is expected to get final approval later this month; Democratic Gov. Andy Beshear has signaled he will then sign it into law.

As Republicans and Democrats nationwide pull in opposite directions on how easy it should be to vote, Kentucky is making a remarkable tack to the middle. For now, it seems an outlier, but its example may resonate as lawmakers in red and blue states debate how equitable, fair and accessible the ballot box should be.

“You need to have bipartisanship in election policy. And we showed here that you actually get higher turnout and more trust from the public in your system if it’s done that way,” says Mr. Adams.

Mr. Douglas, who teaches at the University of Kentucky, says he made the right choice to join the commission, noting that Mr. Adams was a “straight shooter” with a simple message: “Let’s make it easy to vote, hard to cheat.”

“What a lot of people don’t realize is those [aims] aren’t mutually exclusive,” says Mr. Douglas. “It’s not an either/or thing. That realization is why we’ve got a great thing going in Kentucky.”

Across the U.S., the push and pull over voting rights is roiling a country wrestling over the meaning of democracy and who gets to define it.

The Brennan Center counts hundreds of Republican bills introduced to limit ballot access after the disputed 2020 election. The battleground states of Arizona, Pennsylvania and Georgia – former Republican strongholds that Joe Biden won – have gone the furthest to roll back voting rights, citing false claims by former President Donald Trump and other Republicans about mail-in voting fraud.

Georgia lawmakers are debating whether to dramatically curtail early voting on weekends – “souls to the polls” – and limit access to mail balloting. Not coincidentally, the effort comes after Black voters made increased use of mail ballots in defeating Mr. Trump and sending two Democratic senators to Washington.

Still, the push by Republican lawmakers to change the rules may not reflect their constituents’ views. A new poll in Florida found that a majority of voters, including Republicans, want more choices, not fewer, for when and where they vote.

“Sometimes it seems on this issue that there’s no middle – you’re on one side or the other,” says Trey Hood, a political scientist at the University of Georgia. “But then you look at polling and you see that sometimes the voters are sort of in the middle [on voting access] and it’s the politicians who are so polarized.”

Nor is it clear, four months after the last election, that Republicans have a winning strategy in trying to throttle the expanded access to the ballot that the pandemic made possible.

“The contest should be about ideas, not about access to ballots,” says Emory University political scientist Bernard Fraga, who studies voter participation. The efforts to restrict, he says, fly in the face of “evidence that shows … higher turnout helps both parties. It makes democracy more representative.”

Why Kentucky found a bipartisan groove in legislating the rules of the road is partly down to political dynamics. Under pressure, Republicans allowed early voting in November, which led to higher turnout but didn’t tilt the balance to their opponents. In fact, Republicans increased their share of the vote, with many of the new voting rules in place.

“The things that we did [in 2020] that are being ratified and preserved didn’t really favor one party over the other. They were just pro-voter,” says Mr. Adams.

The national debate over voter access is high stakes. Democrats say that an erosion of voting rights by courts and Republican-controlled legislatures could swing future elections, especially given the slim margins of victory for Mr. Biden in battleground states. Democratic-run statehouses are rowing in the opposite direction by introducing legislation that would make it easier to vote.

Last week, Sen. Raphael Warnock, the first Black senator elected from Georgia, introduced the For the People Act to the Senate. Passed on partisan lines in the House, the bill expands voting access in many ways, including universal mail-in ballots and automatic registration for all citizens at age 18. It also includes strict campaign-finance rules. Republicans have criticized the act as federal overreach that undermines democratic rule-making.

Amid the economic fallout from the pandemic, the battle over voting access has also focused some people on the importance of voting as a civic duty and a form of empowerment.

Democratic political consultant Atiba Madyun believes that Americans are increasingly seeing voting access as a fortifying force for their communities.

“We have this battle within,” says Mr. Madyun, who is Black and whose novel, “Saving Grace,” traces how politicians can rise even as their communities fail. “More of us are seeking to find clarity in it. We have to go through this [battle over voting] in order to become a more perfect union.”

The gateway to the west

That dynamic is seen here in places like Middlesboro, a former mining town of 10,000 in southeastern Kentucky, where voting access is viewed by many as a key to addressing stark social and economic divisions.

Situated in a massive meteorite crater, or astrobleme, Middlesboro had a reputation as a gambling town in the 1930s and installed the first streetcars west of Washington. Known as the gateway to the west, it even built an opera house.

Today, it faces another transition. Worn down by the decline of coal and a raging opioid epidemic, its residents and leaders are trying to figure out what’s next.

For Dusty Stepp, a handyman and former addict, the effort by Republicans to make voting easier in Kentucky is an acknowledgment that communities need not just financial investment, but civic involvement, to thrive.

“When you can’t or don’t vote, you become kind of disinvested,” says Mr. Stepp. “You can feel it. You can see it.”

Two years ago, Kentucky became the latest state to restore the voting rights of former felons, affecting thousands of convictions related to the opioid epidemic. Dustin Sizemore, an unemployed musician who did time in prison, says he’s not yet seen his voting rights restored.

He’s not sure it’s worth it, because he believes the U.S. is in the thrall of a global cabal that has weakened the voice of the average American. Yet he reckons he would vote if he could. “A choice is better than no choice,” he says.

R.M., a just-retired janitor and former coal miner, lauded the state’s transition to simple paper ballots in November’s election, which the new bill would mandate statewide.

“They made it easier to vote last year and that’s why I voted,” he says. “I never liked the machines with the levers and the contraptions. A simple piece of paper is what I wanted and it’s what I got.”

A lifelong Democrat, he says he has voted for Republican candidates in the past, and will again, if they make an appealing case. “I’m in the middle, like I think a lot of people are,” he says. “I listen. You can convince me. But you have to try.”

‘We will secure justice.’ Colorado reels from mass shooting.