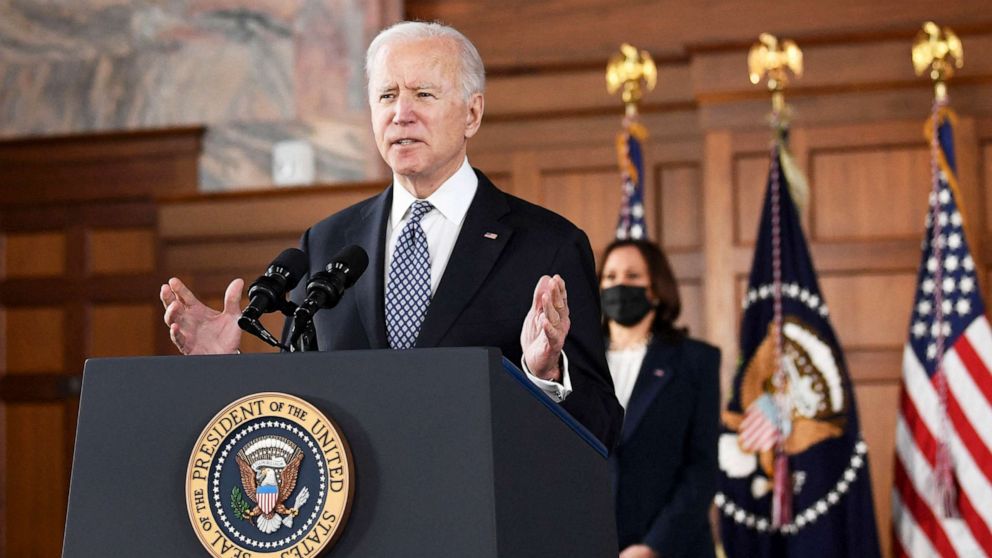 President Joe Biden condemned the rising hate crimes against Asian Americans while in Atlanta on Friday, following a string of spa shootings in the area by a white man that killed eight people, most of whom were Asian American women.

Discrimination and anti-Asian hate crimes saw a surge over the course of the COVID-19 pandemic. Biden never mentioned former President Donald Trump by name, but rebuked the labels his predecessor would often use to refer to virus.

Vice President Kamala Harris, who is of South Asian descent, echoed the president’s veiled swipe at Trump for amplifying racist rhetoric when she spoke before him.

“For the last year, we’ve had people in positions of incredible power scapegoating Asian Americans,” she said. “People with the biggest pulpits spreading this kind of hate.”

Harris used her brief remarks to highlight the long history of racism in the U.S., specifically noting internment camps for Japanese Americans in the 1940s and the perception of Muslims in America after the Sept. 11 attacks.

“Racism is in America, and it has always been,” Harris said. “Xenophobia is real in America and always has been — sexism, too.”

Tuesday’s killings were likely a “targeted attack driven by personal grievance,” according to a source briefed on the probe.

“Whatever the motivation, we know this: Too many Asian Americans have been walking up and down the streets and worrying, waking up each morning the past year feeling their safety and the safety of their loved ones are at stake,” Biden said.

He continued, saying “hate and violence often hide in plain sight” and that it’s often met with silence. Biden made a call to action for Americans to “speak out” because “silence is complicity.”

“We cannot be complicit,” he said. “We have to act. … We have to change our hearts. Hate can have no safe harbor in America. It must stop. And it’s on all of us, all of us together to make it stop.”

Biden found himself in the role of “consoler-in-chief” once again in his young presidency, speaking directly to the victims’ families at the end of his remarks and leaning on his personal experience with losing loved ones to try to ease their pain.

“I know they feel that there’s a black hole in their chest they’re being sucked into and things will never get better, but our prayers are with you,” Biden said. “And I assure you, the one you lost will always be with you, always be with you. The day will come when their memory brings a smile to your lips before it brings a tear to your eye, as unbelievable as that is now. It will take a while, but I promise you it will come. And when it does, that’s the day you know you’re going to make it.”

The president has been vocal in his support for the Asian American and Pacific Islander community, issuing a presidential memorandum on Jan. 26 for the attorney general to back state and local agencies and AAPI communities in preventing hate crimes and to expand data collection and public reporting.

Biden’s trip to Georgia was originally planned to tout the passage of his $1.9 trillion American Rescue Plan as part of his “Help is Here” tour, but his schedule was altered after the deadly shootings. Earlier in the day, Biden and Harris visited the Centers for Disease Control for their first time since taking office and thanked them for their work over the course of the COVID-19 pandemic.