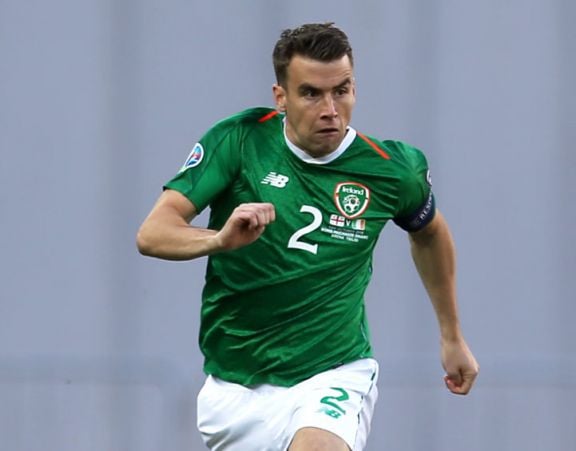 Seamus Coleman wants to help deliver another World Cup adventure for Ireland rather than his own curriculum vitae before he hangs up his boots.

The Republic of Ireland skipper and his team-mates launch their latest qualifying campaign in Serbia on Wednesday evening with the 32-year-old Coleman knowing there may not be too many more opportunities for him to experience another finals tournament after his trip to Euro 2016.

However, he insists personal ambition is not even on his mind as he prepares for his latest challenge.

“And then I’ve had my time, I’ve had my Euros, I’ve had my caps behind me, and I’m not thinking that this could the last one. That doesn’t enter my mind whatsoever.

“There’s a bigger picture than this being Seamus Coleman’s last chance at a World Cup, definitely.”

Coleman will hope to get the nod at the Rajko Mitic Stadium after a 17-month wait for his 57th cap dating back to a 2-0 Euro 2020 qualifier defeat in Switzerland in October 2019 in which he was sent off for a second bookable offence.

The intervening period has seen a change of manager – Stephen Kenny has replaced Mick McCarthy at the helm – while Matt Doherty’s rise to prominence and a series of injuries have cast Coleman in the role of frustrated spectator ever since.

He said: “I can’t explain how much I’ve missed it. It’s been something that’s been on my mind. I love playing for my country and I can’t even remember when the last one was – it might have been my sending off, which is a very long time.

“Then I came in, and I was injured for most of the other selections, unfortunately. I was doing quite well at club level and just picked up a niggle before we met up, which has been disappointing.

“To get here, to be with the lads, to be with the staff is an amazing feeling, but then ultimately getting out there and putting on the green shirt is what we always want, and that’s what I want tomorrow, so we’ll see what happens.

“But I’m delighted to be here, and I can’t wait to get started again.”

Ireland head into the game without a win in eight attempts under their new manager, who admits striker Aaron Connolly and midfielder James McClean are “under-cooked” following their recovery from rib and heel injuries respectively, and with the team not having scored a single goal in the last seven.

However, Kenny’s biggest issue is at the other end of the pitch, where 21-year-old Bournemouth keeper Mark Travers will win just his third cap and make his first competitive appearance in place of the injured Darren Randolph, having got the nod ahead of Kieran O’Hara and Gavin Bazunu.

Kenny said: “I do take it on board that the players are inexperienced, I do take that on board, but we have faith in them as goalkeepers.

“Mark will play, and we have every faith in him.”

Leinster’s Will Connors, Garry Ringrose and James Ryan ruled out of PRO14 final